what causes an action potential to propagate exactly and why should it propagate?

Hello I am taking a neurophysiology course and learned about the action potential and that it propagates in one direction from axon hillock down along the axon. I understand that action potential is simply the voltage difference caused by influx of Na+ ions causing the inside of the cell relatively more positive

My questions is why/how does action potential propagate? why should it propogate?

If at one site where a sodium channel opens to depolarize, and k+ channel polarize the cell to membrane potential at that site, how does this affect the next neighboring ion channels down the axons to open and close? Why doesn't it just cause an action potential at one section of the membrane and stop? What exactly causes the neighboring ion channels to open continuously as well after the previous one open and closes?

Textbooks just says 'it propagates down the axon' but never mentions why it should and why should the previous ion channel configuration affect the next region of the membrane. I guess this might be a rather dumb question but I hope I did not confuse you, I realize my questions is a bit odd?

When a sodium (Na) channel is stimulated by a strong-enough stimulus (such as from an electrical stimulus or from an incoming action potential), it will open and let a lot of Na+ ions influx rapidly into the cell at that channel, creating an action potential there. The locally high concentration of Na+ ion inside the cell at that channel will cause Na+ ions there to spread around immediately. This will cause depolarization and openings of the nearby Na channels, resulting in new actions potentials occurring at the nearby channels. This whole process will repeat itself again at these channels, causing more new action potentials to spread out further. In each cycle of an action potential, the potassium channel opens after the sodium channel does about 1 msec. Although the opening of the potassium channel causes repolarization, it doesn’t have any effects on the concentration of Na+ ion and does not stop the spreading out of the Na+ ions. Therefore, an action potential inevitably spreads out and out. 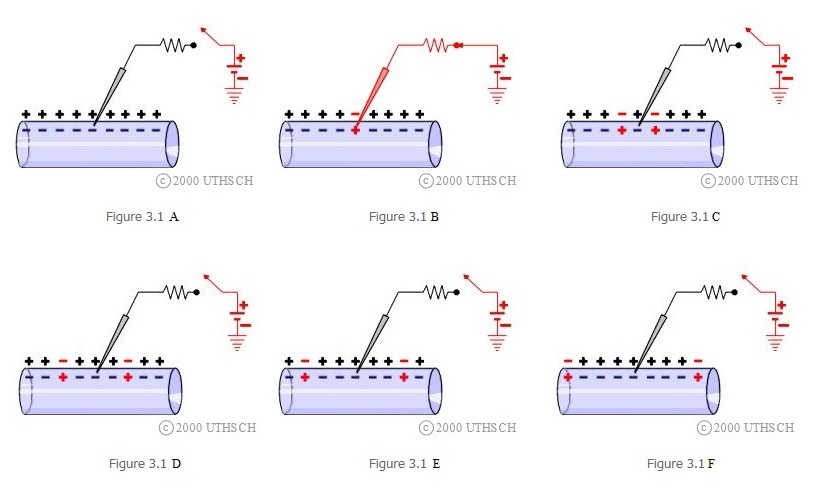 If the axon is stimulated at its trunk, the action potential will spread out both ways, up and down the axon. Figure 3.1 A shows a schematic diagram of an axon and the charge distribution along the membrane of that axon. More positive charges exist on the outside of the axon, and more negative charges on the inside. Now consider the consequences of delivering some stimulus to a point in the middle of the axon, Figure 3.1 B. If the depolarization is sufficiently large, voltage-dependent sodium channels will be opened, and an action potential will be initiated, and the sodium ion (Na+) will influx into the cell.

[The above text and the figure are adapted from Reference 1] 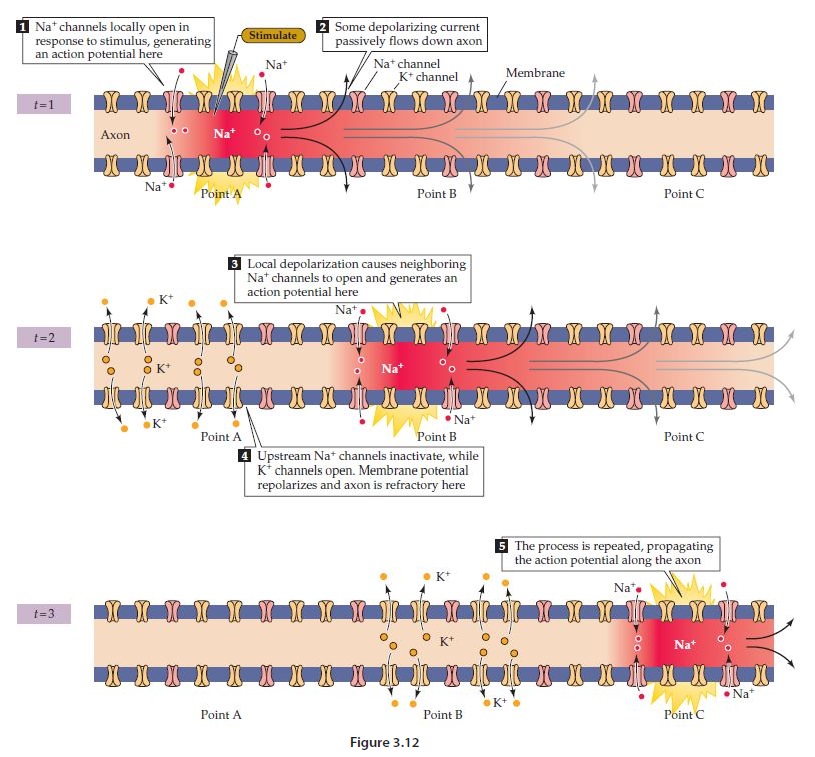 Now, if the action potential spreads down from the axon hillock (which is located to the left side of the axon and is not shown in the picture) as in Figure 3.12 above, it will spread only one way to the distal end of the axon [inset 2, 3, and 5] because the previously depolarized channels will still be inactive (or in refractory period) for a while after the action potential ends [inset 4].

[The above text and the figure are adapted from Reference 2]

4
The function of pumps in forming the resting potential
2
Explanatory gaps in the formation and propagation of action potentials
5
Does electricity pass through synapse?
3
Why does a higher post-synaptic cell resistance lead to a higher voltage change when current is applied?
6
Does NMDA-receptor activation depend on neighboring AMPA-receptor activity?
1
What are the factors that make the membrane more permeable to Potassium ions than Sodium or Chloride (or any other ions)?
2
Measuring postsynaptic potential vs action potential at axon hillock?
0
Measuring spike activity with an electrode: using the principles present in galvanic cells, can one explain how current flows in the electrode system?