Why do right-handed people put things in their left pocket, and vice versa?

I'm not entirely sure if their is a duplicate of this question, or if this is the right SE site, topic, so sorry in advance if I am wrong.

Throughout my life, I have noticed that many people, including myself, put things in a pocket opposite of their main hand of usage (excluding ambidextrous people.) I am right handed, and I typically put my phone and other objects in my left pocket, and I take it out with my left hand and transfer it to my right hand. A relative of mine who is left-handed does the same thing, although with directions reversed.

Why is this so? What psychological reasons are their to do such an act?

This isn't really something I think is easily Googled, so I am asking here.

Q: Why do right-handed people put things in their left pocket, and vice versa? 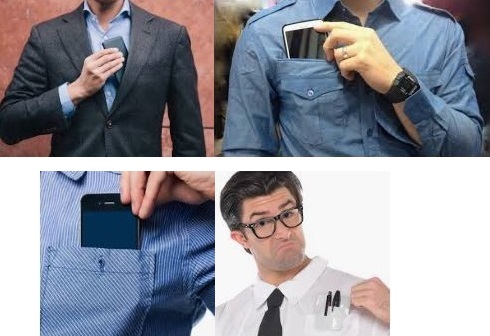 Finding ways to spend least energy for any action seems to be a well-preserved selected trait in all animals. It certainly gives a basic advantage for survival to the animals. That’s why, mostly, a man or an animal will always try to walk/fly/swim the shortest path it can to the goal. This preference applies to all other actions. This finding ways to spend least energy is called the principle of least effort:

“The principle of least effort is a broad theory that covers diverse fields from evolutionary biology to webpage design. It postulates that animals, people, even well-designed machines will naturally choose the path of least resistance or "effort".”[Ref 1]

“Summary. The observations in this section can be summarized by proposing three fundamental principles underlying the study of movement economy.

The first derives from Hull (1943), to the effect that, when the organism is repeatedly presented with a number of equally reinforced alternative responses, that response requiring the least metabolic energy expenditure will become the dominant response.

The second principle is that, when either the choice of response has been made or no choice given and a goal response specified, over trials the organism minimizes the metabolic energy expended in achieving the task goal. This economy-learning, or efficiency-learning, relationship, as shown in Figure 7, was first suggested by Freeman (1948), but Brener and Mitchell (1989) have also recognized the same principle.

Thus, the reason that right-handed people put things in their left shirt-pocket is probably an evolutionary biological reason, not a psychological reason.

It should be noted that evolution works in general but not in every case. And variation is another constant facet of evolution. So, not every selected evolutionary trait will appear in all members of a species or will win out over other competing traits and manifest itself every time in a similar situation. Sometimes, another trait wins out. Therefore, some people or some people sometimes will not behave according to this principle of least effort.

I am left handed and used to put things in my left pocket, but I quickly discovered that often I hold something in my left hand and my right hand is free (to take out keys for example). I think naturally one would put everything in his dominant-side pocket, but over time learns to use the opposite pocket

Not the answer you're looking for? Browse other questions tagged behavior handedness or ask your own question.

5
Why do some people react verbally to intrusive thoughts and/or embarrassing memories?