Are neurons the wrong shape to model neural networks?

Looking at neural networks, each node can be described as a neuron with either several long input wires, or several long output wires.

A neuron, however, has many short input wires (dendrites) and a single long output wires (axon). Thereby not fitting either case.

How do we reconcile these difficulties?

A: Not all neurons have many short dendrites and a single long axon. In fact, the majority of them do not have this shape. Cerebellar granule cells, which are the most numerous neurons in the brain (estimates of their total number average around 50 billion, which means that they constitute about 3/4 of the brain's neurons)[Ref 1,2,3], do not have this shape. They have an axon that branches out into long parallel fibers as shown in the diagram below (modified from the figure in Ref 2). 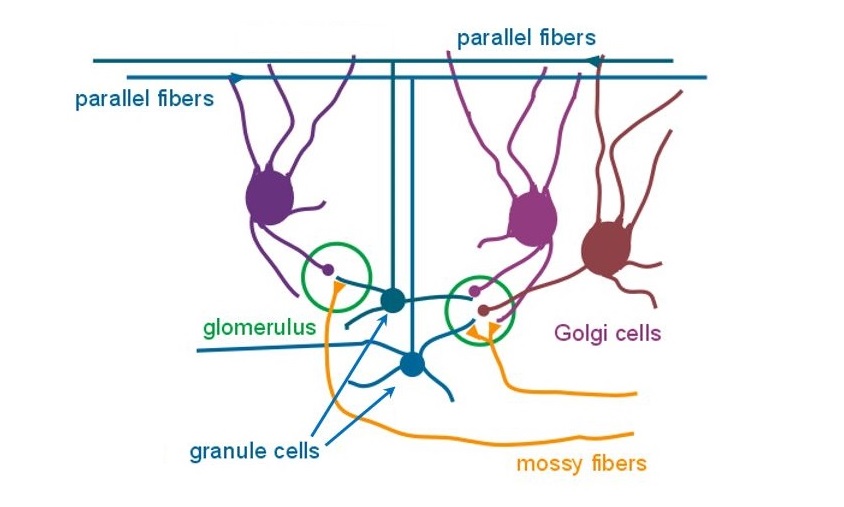 The shapes of neurons vary greatly. This is because neurons have evolved their structures to suit their functions:

We can learn a lot about what a neuron does by looking at it’s morphology (i.e. shape). For example a neuron with large branching dendrites is likely integrating information from a large number of inputs, whereas a neuron that has dendrites that branch close to the soma, but don’t extend very far, is probably only integrating information from it near neighbors. Same thing with axons, projection neurons have long axons that allow them to communicate with neurons in distant brain regions, while a local interneuron will a short axon that will only branch locally, allowing it to talk to nearby cells. Some cells in the peripheral nervous system have the axons coming directly out of the dendrites, allowing them to efficiently convey information from one to the other. [Ref 4] (The figure below is also from Ref 4)

So, neurons have evolved their various shapes to do their functions. I think whether the one shape of these, as questioned in this thread, or many or all of these shapes are right or wrong for us to use to model neural networks is not answerable now. But I think we should try to study and learn from them because it is the best model we have. Remember, these neurons with their various shapes and connections are successful in creating one of the most wonderful phenomena in this universe: our conscious mind.

Not the answer you're looking for? Browse other questions tagged neuroscience neural-network or ask your own question.

30
How are newly created neurons recruited into existing networks?
19
Is there a region of cortex which over a period of development becomes the seat of self?
6
Does each sensory neuron type have a characteristic spike sequence pattern?
5
A question on synapses
4
If the optic nerve transmits to both hemispheres, how do split-brain experiments work?
5
What sources of randomness does the brain use for sampling?