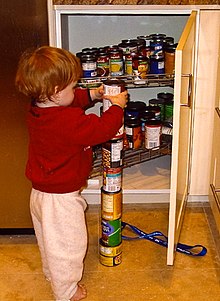 People with Asperger syndrome often display restricted or specialized interests, such as this boy's interest in stacking cans.

How predictive is this of Asperger's: What percentage of normal boys and boys with Asperger's display this type of behavior, respectively?

The picture (and idea) that “stacking cans” is in itself a sign of Asperger’s is misleading at best. One could just as easily say this child is making “a tower”, a common activity amongst children.

Stacking objects can be a child development tool.

Autism is usually a range or spectrum of co-morbid symptoms that greatly vary from one autistic individual to another. As an only common characteristic we may say that autism is a disability in social cognition.

Even no two aspergers are same (and now the term Asperger has been merged with ASD since there is not a clear distinction of Asperger and other ASD. Initially Aspergers was distinguished from most other types of autism that do not have any speech or language delay (WHO, ICD-10 , DSM-4) though internally it is very same to other forms of autisms.

We may say that arranging objects (such as laundry clips, pen caps, pebbles, blocks, sticks etc) may help recognise autism, but it is not a conclusive by any means. Almost any kids do some amounts of constructive play. If a kid likes to line up toys, no need to panic, it is probably not autism, its probably a very common kid, playing with stuffs. However if there are combination of social difficulties then maybe it is autism and the kid needs support and understanding.

Conversly, someone is autistic does not mean they will obsessively arrange toys in arrays. Some will watch TVs, some will sit still, some will jump or pace up or some will try to socialise but eventually fail. Or some will sit beside the window, or some will not look anything such readily recognisable. ASD is a spectrum of conditions, not one single condition.

Lining up toys that is only one observation on behaviour but there are many more other aspects such as some common characteristics are difficulties comprehending social norms and cues, failing to guesswork on social expectations, lack or inappropriateness in using body language, lack of eye contact, lacking sense of personal boundary, irritability with change of address or routine or living methods or arrangement of things, hypersensitivity or hyposensitivity (or combination of these 2) towards sound noise, light, smell, tastes, texture, in some cases difficulty with fine motor skills, learning difficulties such as dyscalculia or dyslexia, problems with facial recognition etc. However these symptoms usually occur in a combination and vary greatly within ASD individual.

Yes, punding, patterning and constructive play (and some cases disinterest or difficulty or inability in pretend play or role play game) is one of the common feature of ASD, and not necessarily tin cans but these infants may find some other materials, and not only lining up but they may engage in making more type of arrays and patterns, however only 1 characteristic is not even close to conclusive.

Not the answer you're looking for? Browse other questions tagged autism aspergers or ask your own question.

13
Are IQ tests “biased” against individuals with Asperger's Syndrome?
27
Is the Neanderthal Theory of Autistic brain a reasonable scientific theory?
17
Why is Asperger Syndrome poorly recognised in France?
19
Is the mathematician's activity psychologically healthy?
8
Why does Asperger's Syndrome seem to overlap with high IQ?
5
Is autism caused by genetics?
3
Excluding psychometry and interview methods, is there any physical or molecular method that can confirm mild autism?