Biologically plausible models for causal inference in the human brain 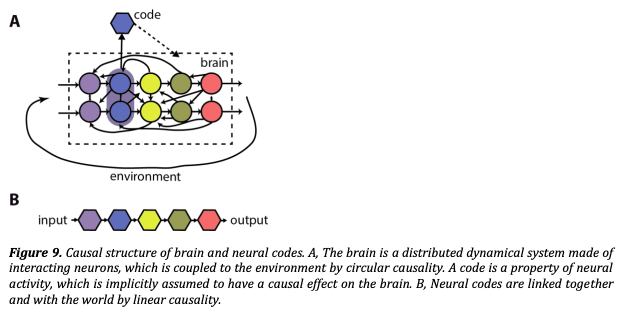 On the 18th page he explains that:

which is incongruent with concept of a neural code since:

Neural codes abstract time away, but temporality is critical to the operation of a dynamical system.

It's worth noting that Judea Pearl and other computer scientists have developed practical methods for causal inference [2] but no rigorous notion of causality. For this reason, I think evidence of the brain's causal structure would require a practical dynamical model of the brain on which we can perform causal inference to answer questions in behavioural neuroscience.

This leads me to a couple questions:

After further reflection upon comments due to Bryan Krause I think these two questions may be combined to form a single question:

Are there biologically plausible models for causal inference in the human brain?

Brette's notion of causal structure for the brain appears to be in direct opposition with that of Karl Friston's Free Energy Principle [4] whose formalism builds upon neural coding theory:

Learning under the free-energy principle can be formulated in terms of optimizing the connection strengths in hierarchical models of the sensorium. This rests on associative plasticity to encode causal regularities and appeals to the same synaptic mechanisms as those underlying cell assembly formation.

However, in [5] Karl Friston argues that a dynamical system like the brain can encode sequences of events via attractors:

...the basic idea is that the environment unfolds as an ordered sequence of spatio-temporal dynamics, whose equations of motion induce attractor manifolds that contain sensory trajectories. Critically, the shape of the manifold generating sensory data is itself changed by other dynamical systems that could have their own attractors. If we consider the brain has a generative model of these coupled attractors, then we would expect to see attractors in neuronal dynamics that are trying to predict sensory input. In a hierarchical setting, the states of a high-level attractor enter the equations of motion of a low-level attractor in a nonlinear way, to change the shape of its manifold.

This is a plausible hypothesis which suggests that a more sophisticated notion of encoding might be used by the brain where state variables emerge from temporal sequences via attractors. Having said that, Brette's critique of the conventional interpretation of neuronal codes by the majority of behavioural neuroscientists still holds.

Causal Inference vs the metaphysics of Causality:

We can't know the brain itself, only models of the brain that we may use to do experiments. To clarify my first question: Brette says that models based on notions of neural coding wouldn't qualify so what are concrete examples of dynamical systems models that do? My questions are very much designed to move the discussion beyond theory and what could be useful to behavioural neuroscientists. Furthermore, I suspect that it's not possible to define causality without going into metaphysics. This is probably why Judea Pearl chose to develop a theory of causal inference and not a theory of causal methods. Using methods from causal inference you can argue that two causal structures are distinct if: (1) there is a method for causal inference that is applicable to struct A but not struct B (2) there is a method for causal inference for which struct A and struct B give different answers.

From the literature I have found on biologically plausible models for causal inference in the human brain, experimental validation appears to be constrained by a lack of data. In the case of causal inference models for multisensory perception, the authors of [2] say that:

...the specific computations underlying the frontal multisensory representations, and their specific role in driving behaviour, have remained elusive.

But, the path to biologically plausible models first starts with cognitive plausibility.

In [1], Kording et al. come up with a time-bounded model and compute-efficient cognitive model for multisensory perception:

Perceptual events derive their significance to an animal from their meaning about the world, that is from the information they carry about their causes... The brain should thus be able to efficiently infer the causes underlying our sensory events. ...We formulate an ideal-observer model that infers whether two sensory cues originate from the same location and that also estimates their location(s). This model accurately predicts the nonlinear integration of cues by human subjects in two auditory-visual localization tasks. ...By combining insights from the study of causal inference with the ideal-observer approach to sensory cue combination, we show that the capacity to infer causal structure is not limited to conscious, high-level cognition; it is also performed continually and effortlessly in perception.

Their causal model may be succinctly described as follows:

They then go on to define a Causal Bayesian model which may be described using Bayes rule:

where $C$ denotes a type of cause and $x_v, x_a$ represent the visual signals and auditory signals respectively which are modelled as univariate Gaussian variables.

If $C=1$ there is a single cause and if $C=2$ there are distinct causes. Although this model is simple the authors find that the model's predictions actually match the behaviour of the participants in the experiment. This experiment is very useful but the authors recognise:

This leaves the question of what neural processes underlie the causal inference computations that emerge at the behavioural level as close to Bayes-optimal.

Building upon [1], the authors of [2] combined a multivariate analysis approach to MEG data with computational modelling of behaviour, to infer where in the brain and when neural signals predicted by models of sensory fusion and causal inference emerge during multisensory perception. They reasoned that causal inference would rely at least in part on the frontal cortex, a structure that is thought to subserve causal reasoning and sensory conflict resolution.

This is an important step forward as they managed to find a neural description using MEG data that is consistent with their hypotheses and a refinement of Kording et al. causal model:

Using a multisensory rate-categorisation task, we show that flexible multisensory behaviour is best described by a Bayesian causal inference model. The neural representations of sensory fusion and inference unfold hierarchically in time and across distinct brain regions. This comprises a cascade from early unisensory encoding at the primary cortical level, to reliability-weighted fusion in the parietal-temporal cortices, and to causal inference primarily in the frontal lobe. We found that neural representations within the dorsomedial and ventrolateral PFC were directly predictive of categorical choices, and that the vlPFC subserves a particular behavioural benefit of inferring sensory causes to minimise perceptual bias in discrepant crossmodal contexts. Our results thereby reconcile previous rival computational models of multisensory integration (Figure 1), by showing that distinct computational strategies are orchestrated in temporal sequence and along a parietal-frontal hierarchy.

Perhaps greater progress can be made modelling the probabilistic behaviour of populations of neurons [3,4]. But, as pointed out by Brette these would have to be neural dynamics models where the method for inferring population codes accounts for temporal dynamics in a biologically plausible manner.