How happy are people relative to neutral (as measured by experience sampling)?

Most studies on experience sampling are about whether some activity correlates with increased or decreased happiness/subjective well-being. However, it's often hard to tell from these studies what number corresponds a neutral point, where someone is neither unhappy or happy (or equally so), or is feeling an valence/affect equivalent to a nonconscious state. For instance Experience Sampling Method: Measuring the Quality of Everyday Life (2007) shows its results in terms of z-scores, which are defined relative to some average, but it's unclear whether that average would be higher or lower than a neutral point. As such, while we can say that these people are happier in this situation than another, it's hard to see whether they're overall happy or unhappy in that situation.

I'm not particularly interested in what activities or age or gender correlates with happiness, but just how happy people are relative to some clearly defined neutral point. Ideally, the study wouldn't just show some average among all study participants across all their experiences, but also what percentile corresponds to what happiness ratings, and the range of happiness scores and the frequency of different happiness ratings for each person. Is there a study that addresses this topic?

I just finished reading this article (2018) by Michael Plant, a PhD student at Oxford University. Given that it is not a peer-reviewed paper, it would be worth checking his references, but this is what he says about the neutral point:

Life satisfaction surveys don’t ask people to specify what point on the 0 to 10 scale they would consider equivalent to not being alive. 0 is labelled not at all’ and 10 ‘completely satisfied’. ... How could we settle where the neutral point is? Two strategies seem possible. First, we could find out at what LS scores individuals report their lives are neutral on experience measures of SWB. Second, we could poll people to ask at what LS score out of 10 they would be indifferent between living with that score for the rest of their life or dying. I am unaware of any analysis which has been conducted along either lines. Thus, for the moment, this unfortunately remains a point of armchair conjecture.

Diener and Diener's "Most People Are Happy" (1996) summarizes the results of various studies on how happy people are, and finds that the vast majority of people are happy, based on a variety of methodologies.

Myers and Diener (1995) asked “Who is happy?” but examined the question of who is more and who is less happy. In fact, most people report a positive level of subjective well-being (SWB), and say that they are satisfied with domains such as marriage, work, and leisure. People in disadvantaged groups on average report positive well-being, and measurement methods in addition to self-report indicate that most people's affect is primarily pleasant. Cross-national data suggest that there is a positive level of SWB throughout the world, with the possible exception of very poor societies. In 86% of the 43 nations for which nationally representative samples are available the mean SWB response was above neutral. Several hypotheses to explain the positive levels of SWB are discussed.

Here's the section on experience sampling:

Brandstatter (1991) drew his respondents in Europe from unemployed persons, soldiers, students, married couples, and members of charity organizations. Participants recorded a selfselected word that described their current mood when they were signaled. Joy and relaxation were reported 43% of the time, and sadness, anger, and fear were reported 22% of the time. On average, respondents reported positive emotions 68% of the time.

Diener, Larsen, and Emmons (1984) examined subjects' levels of mood in different situations. The moods ranged from slightly positive, when respondents were alone, to extremely positive, when participants were in social, recreational situations. Finally, Delespaul and deVries (1987) studied chronic mental patients living in the community and found that the average mood at the time these patients were signaled was above the neutral point of the scale. 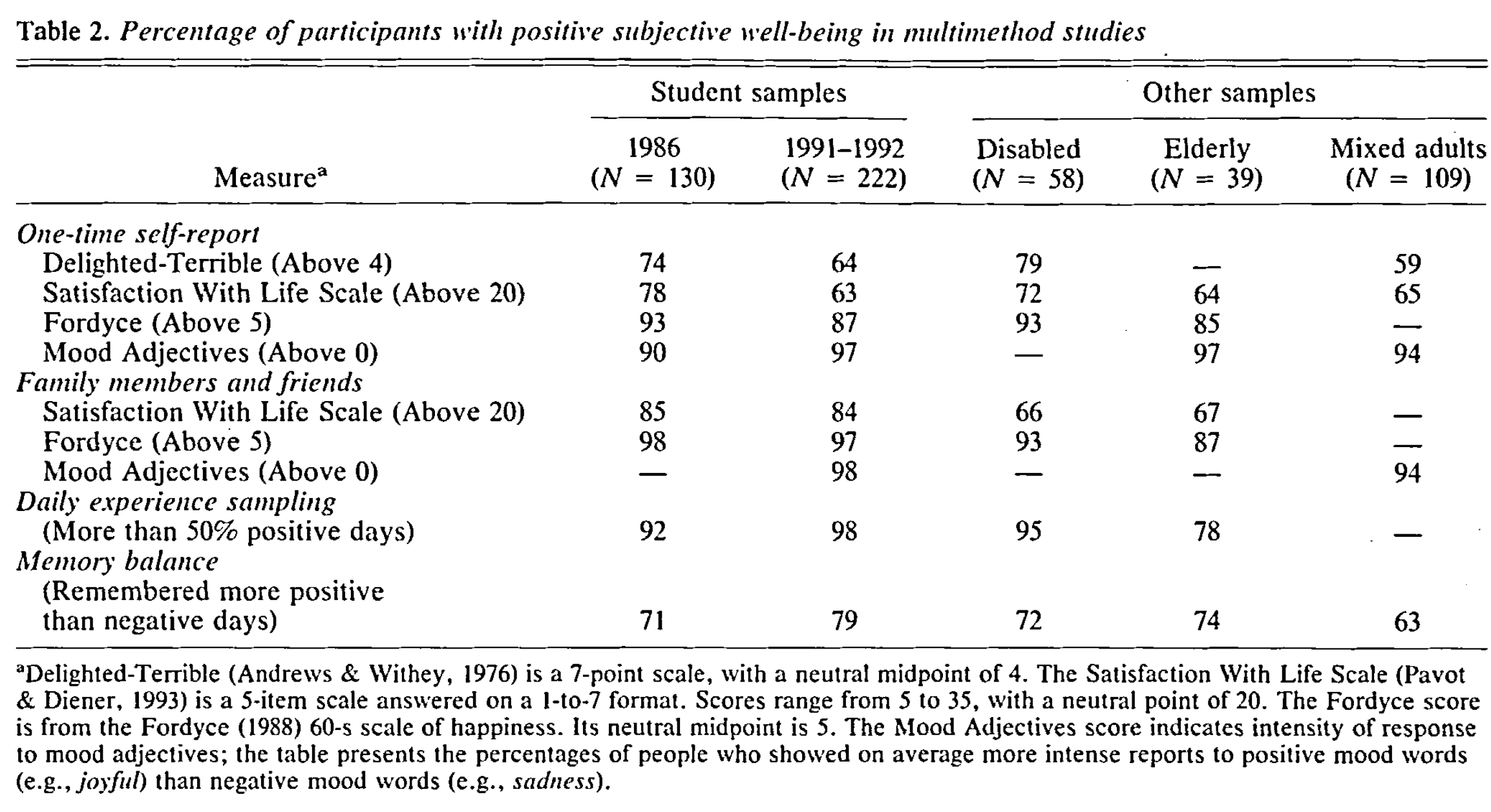 These results of happiness were considerably higher than what laypeople and psychology professionals expected:

Biswas-Diener, Vittersø, and Diener (2005) found that among the Inuit (indigenous people of Greenland), the Maasai (the traditional pastoralist-hunter tribe in southern Kenya and northern Tanzania), and the Amish, the vast majority of respondents scored above neutral in both satisfaction and affect balance. The self-report survey results were replicated with several other measures of SWB—informant reports, experience sampling, and a memory measure—reducing the plausibility that the positive responses are due only to self-report biases. In addition, all three groups were above neutral on satisfaction with each of 14 different life domains. Thus, the finding that most people are happy generalized to cultures that differ significantly from mainstream Western culture.

Not the answer you're looking for? Browse other questions tagged happiness or ask your own question.