How can we know which types of brainwaves is dominated at particular state?

I am a freshman at Neuroscience.

And if it change amplitude, is there any ways can I know what is maximum and minimum range of amplitude of each types of brainwaves.

Thank you very much.

See a previous Q&A: Why do brains oscillate within specific frequency ranges?

I think that answer covers much of your question; I'll try to cover the rest here. In short, the names gamma/beta/alpha/theta/delta are just that: names of parts of a spectrum, just like colors red/green/blue. "Alpha waves" aren't necessarily a real, discrete thing, it's just a name given to oscillations in a particular frequency band which may or may not be due to a "real" oscillation: even a random system produces waves of many frequencies.

The power spectrum of noise in the brain is typically "pink" which means it falls off with ~1/f or 1/f2.

To see "real" elevations in a power spectrum, you need to plot the whole spectrum and look for "bumps." I just grabbed one from a random paper, and although I don't like how these data are plotted without a log scale, it does show peaks in the spectrum nicely: 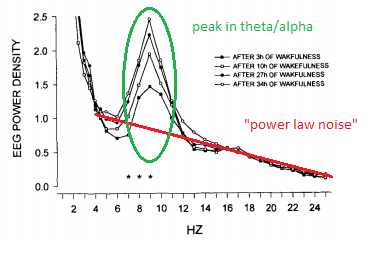 As far as the amplitude of these "waves" - that entirely depends on your recording system, skull geometry, and other technical issues specific to a particular recording: the actual amplitude in volts is not really important. Therefore, typically one normalizes the power spectrum and either compare across conditions in a recording (that is, keeping the recording system constant and looking at different epochs), or normalizes the entire spectrum to "total power" to compare between recordings.

It almost never make sense to compare power in different frequency bands, though, in saying whether a frequency is "dominant": there is no meaning to delta being higher than beta, for example, besides the power law relationship where power is almost always higher at lower frequencies (except for extreme cases like the alpha peaks in the image above). What is relevant, however, could be when "in condition A, delta is higher than delta in condition B, and beta in condition A is lower than beta in condition B": relative comparisons are key. The exception is when you have prominent peaks, like in the image above.

Not the answer you're looking for? Browse other questions tagged neuroscience brain-waves or ask your own question.

9
Why do brains oscillate within specific frequency ranges?

6
What does daytime actigraphy reveal about an active and awake brain?
5
Structural descriptions of neuronal networks are important for understanding brain dysfunctions; which dysfunctions, in particular?
2
How does my spinal cord know to take reflexive action?
4
Why is the order of brainwaves not labelled “alphabetically”?
3
How do we know what colors animals perceive?
1
How do we know brain Is not involved in knee reflex?
2
How can I determine which of Brainwave is dominant as one state by EEG data?