Is there any relationship between intelligence and big five personality traits?

We just published a meta-analysis on the correlations between personality and intelligence in Psychological Bulletin (Anglim et al, 2022, PDF):

Facet correlations: Importantly, the meta-analysis showed that the relationship between personality and intelligence can be better understood at the facet-level (i.e., the narrower traits below the level of the Big Five). In particular, several of the Big Five that have no correlation at the domain level, have facets with opposing processes (e.g., assertiveness versus gregariousness; order versus competence; see also variations in openness facet correlates). The paper includes facet-level correlations for HEXACO, BFI-2, BFAS, and NEO PI measures of personality. Below you can see the NEO PI facet-level correlations (as this measure was the traditionally the most widely used, and thus provides the most robust estimates). 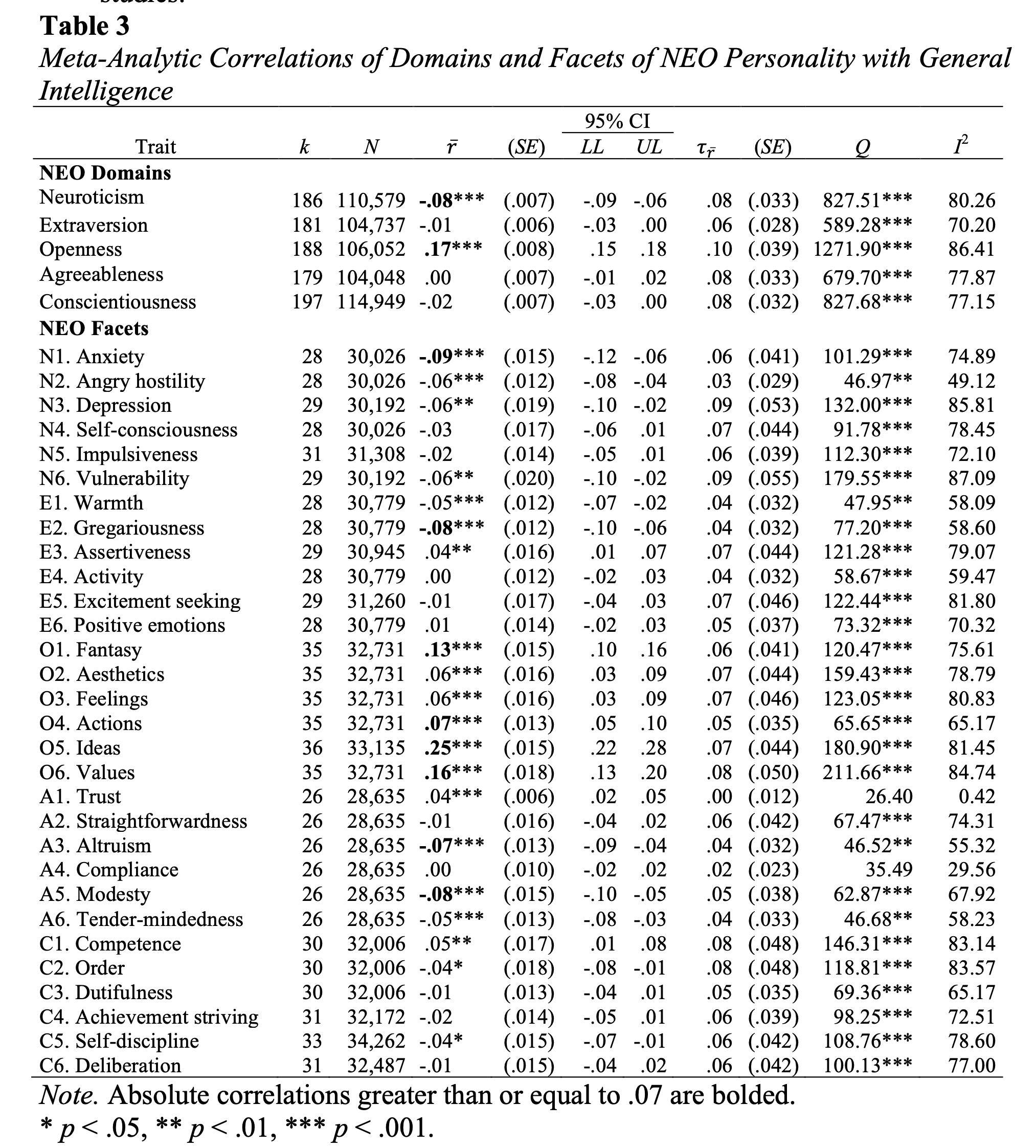 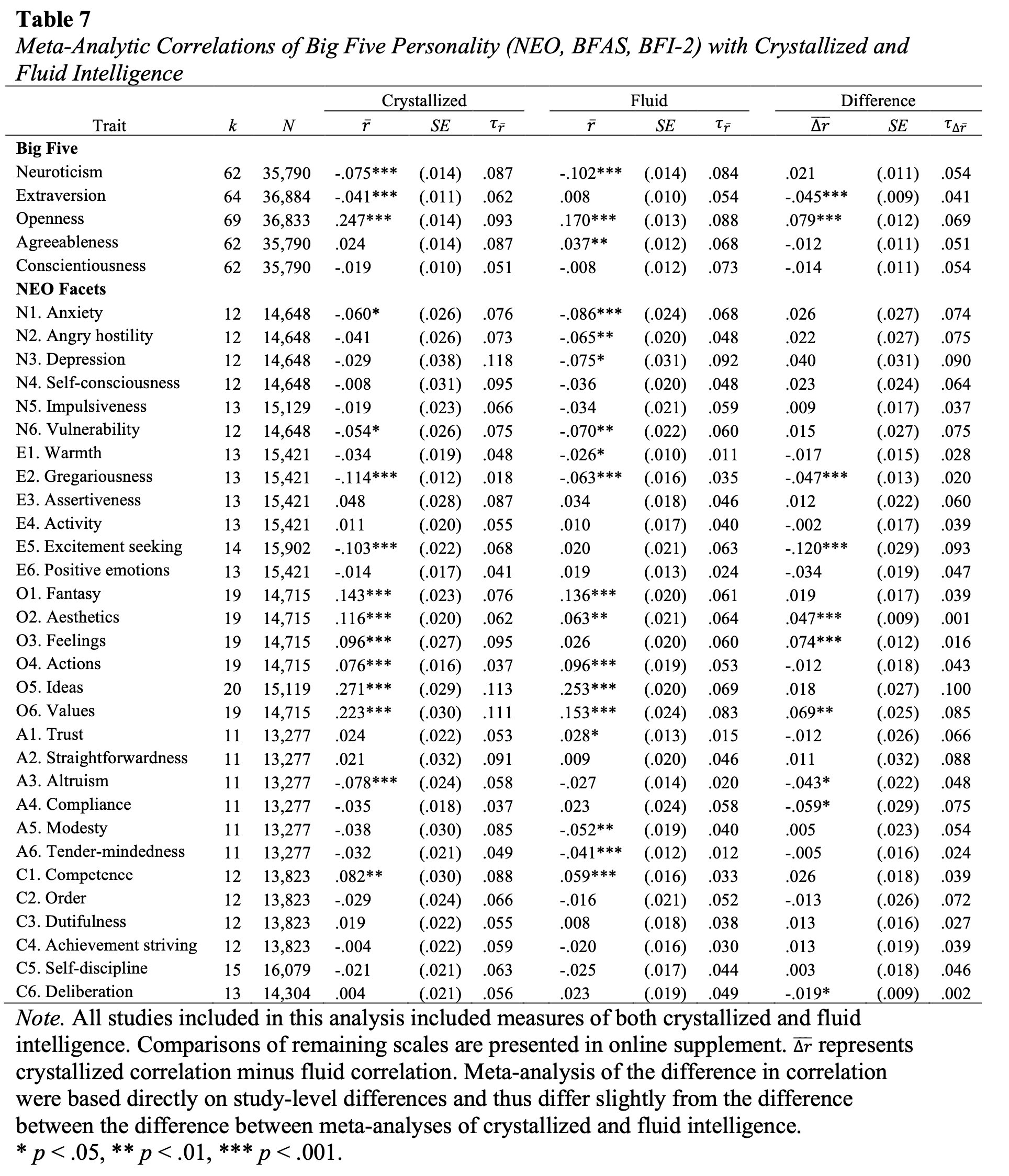 Intelligence as measured by g is most associated with Openness, at modest levels, about r = .10-.15, meaning that only 1% of the variance of each is explained by the other.

I suppose this needs a more in-depth answer, but a quick search found one twin study (Bartels et al. 2012), which not only correlated IQ with Big5, but also tried to determine how much of that has a shared genetic basis:

That paper also serves as mini-review of prior works:

Openness to experience tends to correlate highest with intelligence (Ackerman & Heggestad, 1997; Aitken Harris, 2004; Chamorro-Premuzic, Moutafi, & Furnham, 2005; Moutafi, Furnham, & Crump, 2006) [...] Results for other personality traits are less clear. Some studies reported negative associations between IQ and neuroticism (Austin, Hofer, Deary, & Eber, 2000; Kyllonen, 1997). Occasionally, extraversion has been reported to correlate (positively and negatively) with intelligence (Wolf & Ackerman, 2005), and this relation has been moderated by the nature of the test and the context (Bates & Rock, 2004; Matthews, 1997; Rawlings & Carnie, 1989; Robinson, 1985). Correlations of intelligence with conscientiousness have been small and negative (Furnham et al., 2005). Moutafi et al. (2006) hypothesized that conscientiousness is a trait that less intelligent individuals can possess to compensate in a competitive environment. Conscientiousness, in contrast, has been positively associated with academic performance (Chamorro-Premuzic & Furnham, 2003; Lievens et al., 2002). Agreeable people tend to be pleasant and accommodating in social situations and this trait is rarely associated with intelligence. However, one study found a small positive relation with scholastic achievement in adolescent males (Peterson, Pihl, Higgins, Seguin, & Tremblay, 2003). Altruistic behavior, which is a small aspect of the construct of agreeableness, was associated with higher IQ scores in younger children (Kohlberg, 1964; Krebs & Sturrup, 1982)

Regarding the compensation hypothesis between conscientiousness and IQ, a more recent review-ish paper, Murray et al. is critical of it, considering it an artefact of twin studies. Nevertheless, there's a more recent study Rammstedt et al., which (using OECD's PIAAC - "PISA for adults" as substitute for IQ) again found in favor of that compensation hypothesis; it also confirmed the positive correlation between Openness and cognitive ability and found a negative correlation with Neuroticism. It also found some moderators for these: