When the DEA says a drug is X times more potent than another, what do they mean?

Fentanyl is a synthetic opioid that is 80-100 times stronger than morphine.

What does that refer to?

The IUPHAR has stated that 'potency' is "an imprecise term that should always be further defined", for instance as EC50, IC50, ED50, LD50 and so on.

I guess effective dose is the relevant notion here, but which version does the DEA use ED50, ED95 (does it matter which)?

Presumably they are not talking about receptor affinity which would be mostly irrelevant from DEA's perspective (although the FDA suggests otherwise). The latter ratio between fentanyl and morphine is only 1.35 to 1.14 on the μ-opioid receptor. Even that is not really a good way to compare, because actual measurements of affinity have a large margin of error: 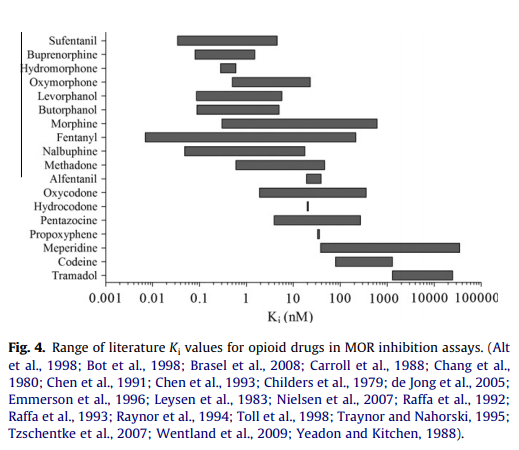 At least the 100 number seems based on the CDC parenteral dose conversion:

(Fentanyl has poor oral bioavailability, so it's not intended to be used that way.)

Not the answer you're looking for? Browse other questions tagged measurement psychopharmacology or ask your own question.

6
What is the null hypothesis, when there is no research hypothesis?
3
What is the appropriate action when using poorly worded scales from previous literature?
4
Is there a downside to using more than the typical 20/40 trials in an IAT?
1
What is the optimal mean correct on a multiple choice test in order to maximise the measurement of individual differences?
7
What does it mean for there to be more variance within groups than between groups in IQ?