Is there a specific term for the notion of storing "algorithms" in human memory?

It seems to me that there is a pretty sharp distinction between storing a "fact" like "Chickens are birds" and storing an algorithm or routine like "how to multiply two 3-digit numbers". I find the latter idea to be very interesting, and I'd like to read more on what has been written on this subject, but I don't know how people in psychology/ cognitive science denote this specific aspect (if they even make such a distinction at all).

I'm familiar with the ideas of episodic and semantic memory, and it seems that memorizing an algorithm like the one mentioned above, falls into the overall domain of "semantic memory", but within that area, I'm not finding the term(s) that deal with representation/ storage of this kind of algorithmic/ routine based knowledge (as opposed to "simple facts").

"Sequence memory", as used by Hawkins in this paper seems to come close to capturing some of the spirit of what I mean, but that doesn't seem to be exactly right either.

This is called procedural memory.

In textbooks, memory is often broken down into a hierarchy of types. Note that this taxonomy is primarily a guide to language use - ie, how types of memory are labelled or referred to, not how memory is actually organised in the brain. In standard hierarchies, recalling a mathematical formula would fall under semantic memory, while the process of applying the formula would be stored in procedural memory. 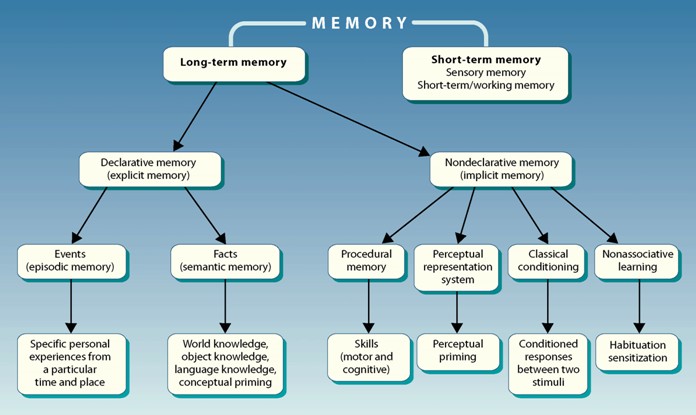 Procedural memory is considered implicit (unconscious) memory, and is most often associated with motor skill or muscle memory, but includes any learned procedure or process. Notably, the process of learning a motor skill (such as riding a bike) mirrors that of learning a cognitive skill (such as playing chess), in that initially, the process can be acquired consciously (explicit), but with practice, it becomes unconscious (implicit).

Not the answer you're looking for? Browse other questions tagged cognitive-psychology cognitive-neuroscience memory semantic-memory or ask your own question.

15
Is remembering a list of words an example of semantic or episodic memory?
4
Does short-term memory decrease after working memory, or does it decrease before working memory?
3
Tests of Semantic Memory suitable for 10 to 18 year old
5
Human memory - remembering sequences of letters vs numbers
2
What is the limit of human memory?
3
What is a Good Working Memory Test Online (or overall if none)?