Where to get psychology assessment resources to put into my website?

I'm not a psychologist and would like to know how to get a psychological assessment to put into my website? Is there a public assessment with question data and scoring logic?

I'm sorry if the question is obvious to psychologists, and feel free to close the question.

I'm initially looking for assessment for students to help them choose a career path. I Googled "student career path quiz" and found numerous assessments, they're free as well, though I don't have the resources to create those assessments in my own website. So I guess my question is:

is there a public resource for psychological assessments, including questions, answers, scoring logic, and reporting?

To be clear: I want to put an psychological assessment in my website to assess students for choosing a career path (e.g. their personality model) one example is the IPIP Big-Five Factor Markers by OpenPsychometrics for the big five personality.

I'm coming from a programming background, so I'll code the assessment myself. But to do it, I need the list of questions, answers, scoring functions, and reporting standard. The ones that I found have questions and answers, but I couldn't find the scoring logic and how to generate reports for such questionnaires. I'm asking if there are public questionnaires that can I take to put into my own website.

There's nothing too deep about IPIP scoring. It just uses the standard Likert scale.

Here is how to score IPIP scales:

Once numbers are assigned for all of the items in the scale, just sum all the values to obtain a total scale score.

And they do have a scoring key for the 50-question version meaning it links questions to Big Five factors; I'm not quoting that whole thing there, but here's a snippet:

And so on for the other three factors. Alpha refers to Cronbach alpha. It's not relevant for your purposes, but only for a reliability evaluation of the test-design itself. (The 100-question variant, also contained in that parge, obviously has higher Alpha.)

If you want a facet-level test, which further subdivides each of the Big Five factors, look at their 120-question NEO PI-R; it has a similar key. They also have a HEXACO key, which adds a sixth main factor (also faceted).

I'm not sure what you mean by "reporting standard". I suspect you want to relate the raw scores to population averages and standard deviations. To get such tables you need to read the original papers on which is based. Here's the one for HEXACO, for instance (this one is even broken down by gender): 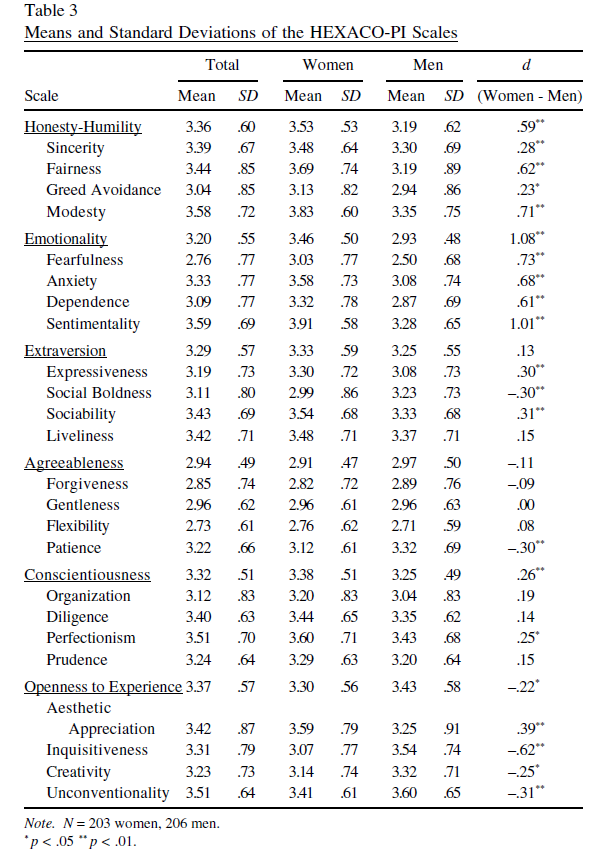 The IPIP master key page has a list of references in which you can find the publication for the specific test you are interested in.

The initial IPIP test you mentioned/found (the 50-q one) is based on Goldberg's paper, but that one doesn't seem to contain either the IPIP-modified questions nor even population level means and standard deviations. (The population-based statistics are prone to change a bit if the questions are altered.) So if you pick a test like that you need to gather a sample of subjects first, have them complete the questionnaires, and then compute your own mean & variance distribution tables! Experimental psychology is (hard) work at times.

Luckily, there's a newer paper, on the mini-IPIP (just 20 q's), (also has key available) which also reports that population data for the older 50-q test.

Not the answer you're looking for? Browse other questions tagged survey or ask your own question.

8
Are presence questionnaires valid in a between-subjects design?
8
Analyzing control questions data for a survey
4
How to frame survey questions to get honest response?