I am wondering if someone could direct me to a longitudinal study examining IQ test scores over time. For example, testing a group of test subjects every 10 years from age 5 to age 65.

The reason I am looking for such a study is I am interested to know what proof there is or is not that IQ is stable over time. It seems to me that it is accepted that IQ should be stable over a lifetime, but I haven't found any study that demonstrates this.

If we assume that IQ is the result of genetics and early childhood environment, then it follows that it should be stable over a lifespan, but I am looking for a study that demonstrates this through repeated IQ measurement over the lifespan.

I'll just give a bit of background about what I understand about IQ below:

There are some subtleties to this question which you may or may not realize. There are (at least) two similarly sounding questions, but they are actually quite different questions:

The answer to the first is trivially yes. An individual's brain is more powerful and has learned more when they are 22, then when they are 4, say. There is also reduction in cognitive abilities when people become elderly.

The second question is more interesting. For this I would refer first to the paper:

The correlation between Moray House Test scores at age 11 and age 77 was 0.63, which adjusted to 0.73 when corrected for attenuation of ability range within the re-tested sample. This, the longest follow-up study of psychometric intelligence reported to date, shows that mental ability differences show substantial stability from childhood to late life.

So the rank-order of abilities within a population probably correlates >0.7 with its rank-order six and a half decades later (age 11 to age 77).

Another interesting study, which is new and I don't believe is published yet, is the following:

In this Danish longitudinal study, they have them first tested at mean age 20, then again 41 years later at mean age 61. They report finding:

The mean change in BPP test scores was -2.94 (SD 5.60) and a retest correlation of 0.81 between the baseline and follow-up BPP scores was observed.

These correlations are not quite in the 0.9-1.0 range, and hence we're certainly not seeing perfect stability. On the other hand, I don't think I know any quantitatively measured psychological trait which shows a greater longitudinal stability (in terms of rank-ordering) than general cognitive ability.

Eff basically has a good answer, but more recent studies, such as one published in Nature 2011 have some additional data with respect to the observed variation over time not being just random measurement error but partially explainable through changes in the volume of some brain areas:

In the absence of neurological insult or degenerative conditions, IQ is usually expected to be stable across lifespan, as evidenced by the fact that IQ measurements taken at different points in an individual’s life tend to correlate well. Nevertheless, strong correlations over time disguise considerable individual variation: for example a correlation coefficient of .7 (which is not unusual with verbal IQ) still leaves over 50% of the variation unexplained. [...]

Further studies are required to determine the generalisability of this finding: for example, is the same degree of plasticity present throughout life or are the adolescent years covered by this study special in this regard.

What I find interesting about this study is that they were able to explain a lot more of the change in verbal IQ than performance (and thus full scale) IQ.

And if you're looking at the stability of IQ raw scores (as opposed to rank order), early adulthood is when this happens [with respect to rest of life], so age of 5 is way to soon. 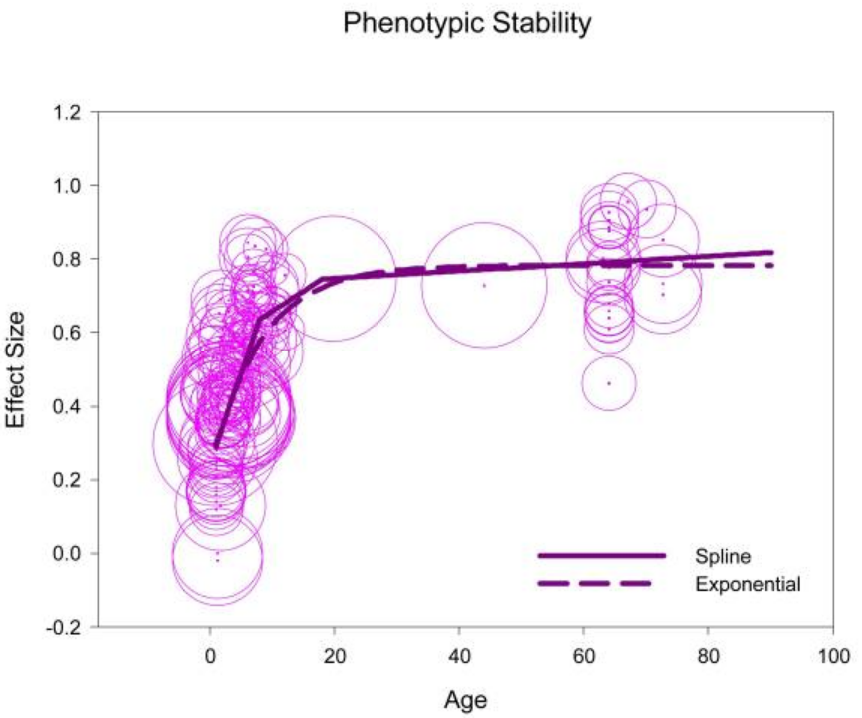 This is based on a meta-analysis, so larger circles show greater data weight & precision.

Not the answer you're looking for? Browse other questions tagged iq neuropsychology or ask your own question.

8
How does raw IQ change over the lifespan at the group-level?
1
Measures to study working memory level related to physical activity
4
Can a shorter IQ test be devised that provides a more approximate measure of IQ?
0
Impact of pre-college schooling on IQ (WAIS)?
1
Is a cognitive test invalid if self-administered?