Is the Thatcher Face Illusion only limited to face recognition?

The so called Thatcher-Illusion has been documented not only on humans but also in some monkeys.

However I can't find literature clearing out if this effect only applies to face-recognition.

What about familiar but non-face visual objects?

Perhaps in other cases the illusion has a different name?

It also seems related to the so called Picasso Problem.

Boutsen et al. (2006) seem to dig deeper but the paper has restricted access.

Short answer
According to a study by Boutsen et al. Thatcherization of objects (houses in this study) did not reveal the Thatcher effect, while faces did.

Background
The Thatcher-face illusion (Fig 1) is, in my opinion, not really an illusion. Instead, it is a phenomenon where in-congruent features are more apparent when observed in their normal everyday context and orientation. In Fig. 1, for example, ms Spears appears normal, but upside down in the left panel, while her face appears hugely distorted when the left panel is turned upside down.

Your question whether this also occurs in objects other than faces. According to a study by Boutsen et al. (2006), it doesn't. Boutsen et al. manipulated images of faces and houses. Houses did not show effects of thatcherization. The authors discuss the why behind this finding and mention that a number of factors may explain the lesser salience in objects, namely a higher variability in the number of manipulated house features and their perceptual salience or relevance. Because of their more stable feature structure and configuration, inversion of house elements was thought to be less salient with houses than with houses. Unlike the parts of a building, facial features are highly relevant to an observer to determine identity or expression, thereby rendering configural manipulations of buildings less disruptive. 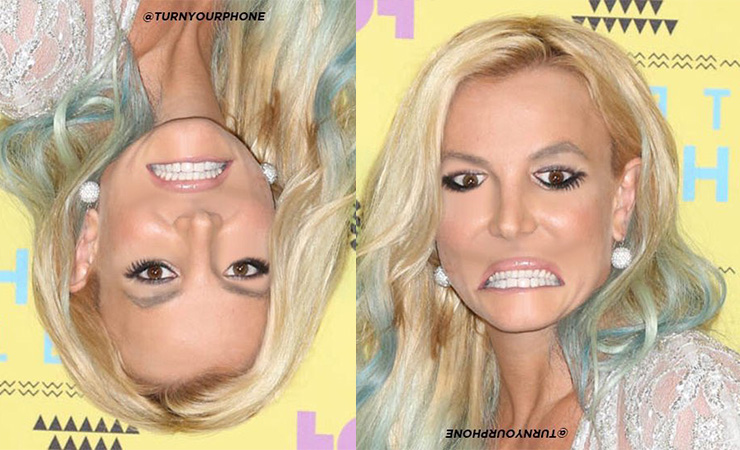 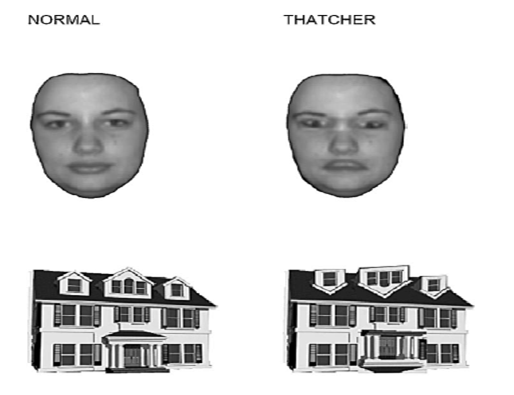 Not the answer you're looking for? Browse other questions tagged neuroscience cognitive-neuroscience vision optical-illusion recognition or ask your own question.

7
Can processing effort for sub-tasks in neural networks be measured?
10
Fusiform Face Area (FFA) for within class recognition?
10
What's the explanation of this optical illusion where many coloured arcs radiate from a central point?
2
Is the Rubin Vase illusion an example of inattentional blindness?
4
Due to Gestalt Psychology, is the face an illusion?
1
Why do we see shadows in the following black-and-white optical illusion?