How do we know human brain development stops around age 25?

I've heard this stated as a fact more times than I can keep track of, but I haven't been able to find papers that actually demonstrate this. This seems to be the most cited paper on the topic, but it just claims that maturity of the brain by age 25 is widely established, and cites a CDC paper (reference 5) that does not appear relevant.

To be more specific, I want to know

I'm hoping to find a good paper that contains answers to these kinds of questions. My motivation for asking this is that I'm wondering whether this end of development is reflective of a deterministic biological process, or if it is a function of the environment (e.g. most people stop learning and meeting new people as much around 25). 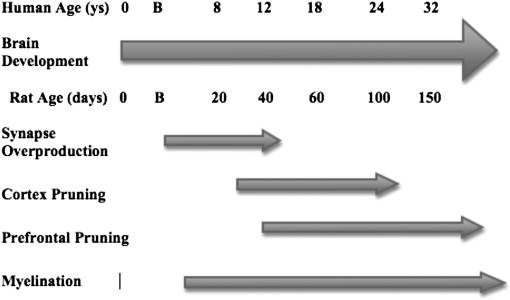 So, a critical region of the human brain is definitely not finished developing by 25, or even 35.

As for whether this process is biologically "set in stone", I think it's fair to say that is still an open question. Looking at the second figure, there is quite a bit of variance and a relatively small sample size. Moreover, this was necessarily a cross-sectional study since we can only get postmortem tissue samples in human subjects. It is entirely possible that older subjects had more pruning because they lived in a less dynamic environment. Even if we could do longitudinal studies, the question of societal trends influencing learning environment would still remain.

That said, there probably is some degree of biological determinism given that we observe similar trends in other mammals. However, as humans tend to have some of the most gene-environment interactions of all animals, and the prefrontal cortex is the most recently evolved brain region, we can only get limited information from studies in other animals.

Given the importance of the human brain development timeline to policy decisions (see paper cited in the question), I think it's fair to say these questions need more attention.

In the book The Naked Ape Desmond Morris (a zoologist and perhaps evolutionary psychologist) says that human brain stops developing when the skull is fully developed, which is around age 25. The reason the skull cannot fully developed until this age (as compared to other animals) is because if it is developed in the uterus of the mother, then she cannot gives birth the child, and thus both will die. The reason for this (as compared to other animals) is because human standing up, so the human female pelvis cannot open enough room to give birth a full-developed infant skull.

Some evidences that he gives supporting this:

Not the answer you're looking for? Browse other questions tagged neuroscience neuroimaging brain-development or ask your own question.

21
Why does neuroplasticity decrease in adults?

5
How many synapses in the average human brain?
1
How is the relationship between hypothalamus and homeostasis & fear and how does it evolve across human development stages?
2
Modelling the Human Brain as a directed graph
3
Understanding the 'Wiring Catastrophe'
1
How do we know brain Is not involved in knee reflex?
11
Why does journaling seem to reduce stress?