Amount of noise in (the recognisable definition of) an ERP

As I understand it, ERPs can be reliably identified only after the noise (inherent to EEG signals, regardless of the task used to evoke the response) has been largely removed, which is done by averaging across multiple repetitions. The ERP in that case is a recognisable-enough pattern in the EEG signal that it can be reliably pointed out in a graph of the averaged trials, for several electrodes, for instance: 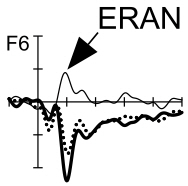 Question #1: if the averaging method is trustworthy enough - assuming enough-many reptitions - to make noise components cancel each other out while leaving reliable effects still in, then why are other non-zero sections of (ripples in) the EEG signal also not defined as ERPs, with some attached meaning (e.g. response to some cognitive task), since they have, after all, survived the same denoising procedure? It would make sense to trust the EEG signal to really not reflect any effect when the intercept (y) is zero. However, in most EEG plots this seems to (very conveniently!) only happen at the t=0 point. The signal then becomes non-zero but only part of is acknowledged as an ERP, whereas the rest seems to be considered noise even though the plotted signal has been denoised.

EDIT: Question #2: why do such ERP plots - obtained by averaging across repetitions and across subjects - never (in my experience) show a confidence band to show the extent of that cross-repetition/-subject variability? Would that information not be of interest?

Averaging does not perfectly remove the noise. Assuming the signal is perfectly correlated across repetitions/sweeps/trials and the noise is independent, than doing from 1 to 2 sweeps will increase the SNR by 3 dB (i.e., decrease the noise by 1/2), Every doubling in the number of sweeps increases the SNR by 3 dB so that after 1024 sweeps the SNR has improved by at most 30 dB. This means that after averaging there is a minimum magnitude required for a peak/notch to be considered statistically reliable. Any ripples with smaller magnitudes are ignored since they are not statistically reliable.

11
What is the standard way to analyze EEG data in a mismatch negativity paradigm?
2
How to filter noise in EEG data
6
How is the signal-to-noise ratio of an event-related-potential measured?
4
Does stimulus-independent ERP make sense/ exist?
2
Readiness Potential vs. Lateralized Readiness Potential in ERP
2
What are ERP components such as N400?
1
How to handle single trial ERP (P300)