What is the human brain made of?

I read an article that stated that the human brain contains 60% fat. Is this fatty tissue structural building material? Or does it just serve as an energy source for the mitochondria?

Since our body are also made out of 70% water, is there also a water in our brain?

And the most important question I want to ask is: what percentage of the brain is actually a neuron?

The brain has a lot of a fatty substance called myelin. It wraps around nerve fibers and enhances the speed of electrical communication between neurons (source: Brain Facts), and increases transmission efficiency (Fig. 1). It is produced by supporting cells in the brain called oligodendrocytes. Myelin is really just many wraps of membrane, and since neurons have long axons and dendrites, too, they also have a lot more membrane than if they were just spherical cells - all of this membrane is "fat" called phospholipid.

Now on to your questions -

Is this fatty tissue structural building material? Or does it just serve as an energy source for the mitochondria?

[I]s there also a water in our brain?

Every cell contains water, as nearly all biochemical reactions take place in a watery solution. An early report found the water content of neurons to be 55% (Saubermann & Scheid, 1985)

[W]hat percentage of the brain is actually a neuron?

Scientific American performed a review on this and settles on a ratio of neurons : glia cells of 1:1 (although numbers of 10:1 have been reported). Glia are the brain's supportive cells and include the oligodendrocytes as mentioned above that produce the myelin (Jabr, 2012). 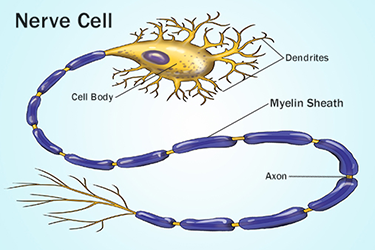 Not the answer you're looking for? Browse other questions tagged neuroscience brain or ask your own question.

21
Is serotonin conclusively linked to depression?
5
What is the capacity of the human brain?
6
What would happen to the human brain after running out of memory?
6
How is the brain cooled?
4
Integrated Information Theory - If correct could humans create artificial consciousness?
3
Is Tinnitus caused by damage to the dorsal cochlear nucleus (DCN) or Auditory Cortex, which can be repaired?