Are people who believe they are of average intelligence mentally ill?

A psychology professor of mine said that anyone who believes themselves to be of only average intelligence is likely suffering from depression or another mental illness that impacts their self-esteem. Is there any source that would corroborate this claim?

Studies show that the overestimation of one's intelligence is both gender and culture/country dependent.

I don't know of any studies which tried to relate the over/under-estimation of one's intelligence (in measurable terms, rather than generic statements like "I'm stupid") to depression.

There is one recent (2017) study in older adults that found a self-reported measure of cognitive abilities to be a stronger predictor of (Big Five) personality than of actual cognitive abilities. Fairly predictably, the correlations were with Extraversion (positively), Openness to Experience (positively) and Neuroticism (negatively). Although not reporting it in its abstract, a slightly older (2012) study, Jacobs et al. also found a (negative) correlation between neuroticism and self-reported fluid IQ (but not for two other kinds: visual and comprehension-knowledge). 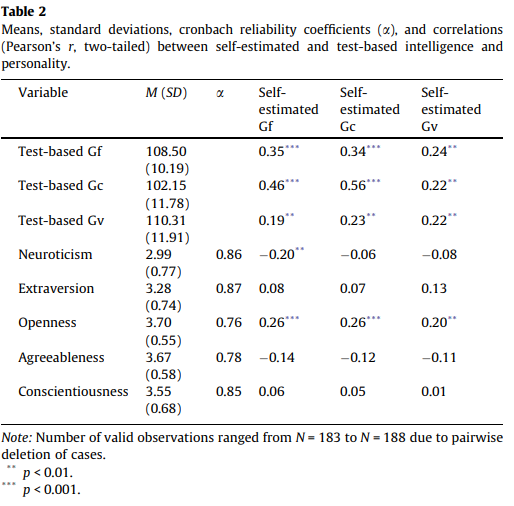 As it's fairly well known, neuroticism predicts depression (and anxiety).

Personality traits also correlate with each other though, and the estimate of one's IQ also correlates with the measured IQ. So, Jacobs et al. also regressed the relationship between self-estimated and measured IQ on the personality traits that looked promising. And alas in this model, Neuroticism failed to predict anything in addition what extraversion and agreeableness did (that probably explains why Neuroticism is not mentioned in their abstract.)

In their discussion section, Jacobs et al. chalk this off to their sample having a fairly restricted range of IQ.

Not the answer you're looking for? Browse other questions tagged reference-request confidence or ask your own question.

7
Relationship between cognitive load and self-indulgent behavior in simple task completion
2
Who are the main authors who studied meditation with scientific methods?
4
What study showed that humans can successfully detect objects within images once they are able to recognize those objects?
4
Paper discussing economic rationale of IQ-based hiring practices
3
Are there detectable differences in brain activity when thinking about people of different degrees of closeness?