Why does the graph have a logarithmic shape? That is, why does the increase rate in %/hr decrease over time?

The graph attached has a logarithmic line, but I can't figure out why. Does anyone have any potential justifications with respect to neuroscience? 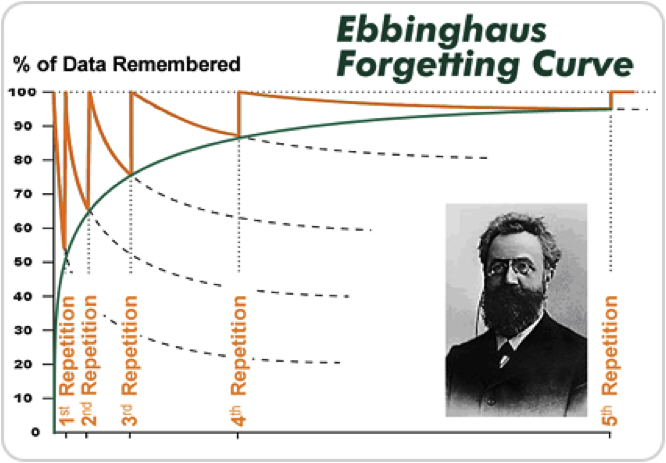 A really satisfying answer would need a full account of what memory is and how forgetting happens, and the full story on that does not exist yet. But there's been some pretty solid progress since Ebbinghaus.

The first step towards an answer would be to nail down exactly what shape that curve is. There's a careful look in: Averell, L., & Heathcote, A. (2011). The form of the forgetting curve and the fate of memories. Journal of Mathematical Psychology, 55(1), 25-35.

But the TLDR version is that the first-pass description of the shape as logarithmic is pretty ok, there's a power-law rule for forgetting. Interestingly the asymptote doesn't seem to be zero! So some elements of memory seem to be effectively permanent.

Why and how that works is a bit of a mystery. Averell and Heathcote cite

Arshavsky,Y.I.(2006). The seven sins of the Hebbian synapse: can the hypothesis of synaptic plasticity explain long-term memory consolidation?

as discussing possible biological mechanisms for the results they found about the shape of the function, so that might be a nice place to start. But I don't think that's the last word on this! It's an ongoing research question.

It seems more like the equation which describes the charge of capacitors (among other phenomenons): 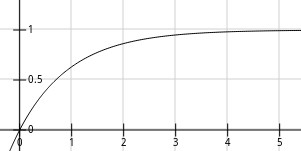 The interpretation is that, just like exponential function gets bigger quickly, this function get closer to $1$ quickly.

The image you linked describes the Ebbinghaus Forgetting Curve. The meaning of the orange functions is that, after a repetition, you gradually forget learned notions over time. After each repetition, the lower end of the quantity of things you remember increase time by time, until you remember almost everything you learned.

6
Does every human brain have the same shape?
5
Why does optogenetics not mean that perfect brain-computer interfaces are possible?
4
The function of pumps in forming the resting potential
6
Parallel arrangement of capacitor and resistor in leaky integrate-and-fire model
3
Can signals from the prefrontal cortex alone trigger a readiness potential in the pre-supplementary motor area?
1
What are the factors that make the membrane more permeable to Potassium ions than Sodium or Chloride (or any other ions)?
0
A website can directly get the location of every electrode of 10-20 system
2
Does the human eye have a muscle that if paralyzed would make us only see things that are in motion?