Beyond CBT and MBI, what are effective behavioral interventions for modern lifestyle addictions during their engagement?

Some modern activities exploit the primitive mammalian reward areas in the brain. They include immediate access to social media, video games, music, sugar, pornographic material, gambling etc. Worse, excessively engaging in these activities without inhibition may enhance the neuroplasticity of the reward centers (and undermine the plasticity of areas involved in self-control, including the anterior cingulate cortex), thus leading to long-term changes of higher reward tolerance, lower self-regulatory abilities, and other exacerbating effects. Unfortunately, most worthwhile work (e.g., proactive learning, writing, thinking about new mechanisms and concepts etc.) usually doesn't offer nearly as much dopaminergic stimulation in the mammalian reward centers of the human brain.

Next to the obvious mindfulness-based interventions (e.g., being aware of the moment and noting the emotional occupation) and cognitive behavioral therapy based approaches (CBT), what interventions have proven to be effective or are likely to be effective for the use case below (*)? References to support these techniques are welcome. Perhaps some techniques from the substance abuse literature has some application. The main focus of this question mostly deals with the following situation:

Alas there's not much in the way of interventions that can curb impulsivity on the spot. Quoting from a somewhat dated but widely cited review, Moeller et al., 2001:

Of the operant therapies used in treating individuals with impulsive-related disorders, contingency management procedures have received the most clinical and research attention. Contingency management involves the use of predetermined positive or negative consequences to reward or punish (and thus deter) the occurrence of a target behavior. [...]

Reinforcement and response cost contingencies have been used in reducing impulsive behaviors in children. In the classroom, token economy systems have proven to be an effective short-term method for reducing disruptive behavior and promoting on-task, academic behavior (89, 90). Outside the classroom, the efficacy of contingency management procedures has not been demonstrated, and such procedures are generally considered to be impractical in home settings (91). Furthermore, recent studies have shown that contingency management procedures produce smaller gains than stimulants like methylphenidate, and gains engendered by contingency management treatment do not persist once reinforcement is terminated (92). Thus, generalization and maintenance continue to be central problems in using these behavioral reinforcement systems.

I quoted mostly the parts relating to ADHD since this seems to be the actual interest behind your question. And nothing on adult ADHD was mentioned in that review (only studies in contingency management in substance abuse in adults were mentioned in that review.) There's a fairly interesting ongoing trial on contingency management in smoking cessation in subjects with and without ADHD; quoting from the design:

Results haven't been published; they're scheduled for 2019. One very, very small trial was completed by another group on this same topic

The prevalence of smoking among individuals diagnosed with attention-deficit/hyperactivity disorder (ADHD) is twice as high as the general smoking population. The aim of this study was to test the feasibility, acceptability, and preliminary efficacy of delivering a smartphone-based contingency management (CM) smoking cessation intervention with 3 adults diagnosed with ADHD. Using a multiple-baseline design, participants (N = 3) used their smartphones to upload 2 daily videos showing themselves measuring their carbon monoxide (CO) levels (abstinence was defined as CO ≤4 ppm). Monetary vouchers, redeemable for gift cards, were used to reinforce smoking abstinence during tapering, treatment, and thinning phases that lasted up to 28 days. During a 1-week follow-up meeting, participants provided 1 CO sample that was not rewarded. Preliminary results demonstrated that participants decreased their exhaled breath CO relative to baseline (from a mean of 24 ppm at baseline to a mean of 6 ppm during treatment). Participants rated the smartphone application as effective, convenient, and easy to use. Results suggest that a smartphone-based CM intervention is both feasible and acceptable for initiating smoking abstinence among individuals diagnosed with ADHD.

On a related note to these two latter studies, there have been conlficting results whether methylphenidate does or doesn't increase smoking in subjects with ADHD.

One more interesting observation (which, unfortunately, does not seem to have resulted in any particular treatment approaches) is that anxiety is correlated with more impulsivity in bipolar, ADHD, and other kinds of high-impulsivity disorders:

Further, children and adolescents diagnosed with disruptive behavior disorders (ADHD, ODD, conduct disorder), conditions characterized by impulsiveness, often present with co-occurring anxiety disorders; for example, in a meta-analysis of community-sample based studies of comorbidity of diagnoses among children and adolescents, Angold, Costello, & Erkanli (1999) found that the median odds ratio for the association between ADHD and anxiety disorders was 3.0 (2.1–4.3) and for CD/ODD and anxiety disorders was 3.1 (2.2–4.6). Thus, while our study did not include an assessment of behaviorally disinhibited temperament, prior literature supports the proposition that anxiety may particularly influence impulsivity in individuals with an underlying predisposition toward behavioral disinhibition.

Also worth mentioning perhaps is a recent (and very large) epidemiological study on the overlaps of ADHD, anxiety, and bipolar (alas without a separate measure of impulsivity):

Interestingly the link between anxiety and ADHD isn't strong considering the known genetic factors (from the mega study published in Science this summer), although the genetic link of ADHD with bipolar is significant and so are the genetic links of ADHD with major depression (MDD) (which is even stronger), and of anxiety with depression. Also OCD is (genetically) linked with bipolar but not with ADHD. (Schizophrenia is genetically well-linked to almost everything psychiatric except the anxiety disorders.) Research into genetic causes of most psychiatric disorders can be considered in its infancy through (genetic factors can currently explain only a small fraction of the variance in disorder incidence). 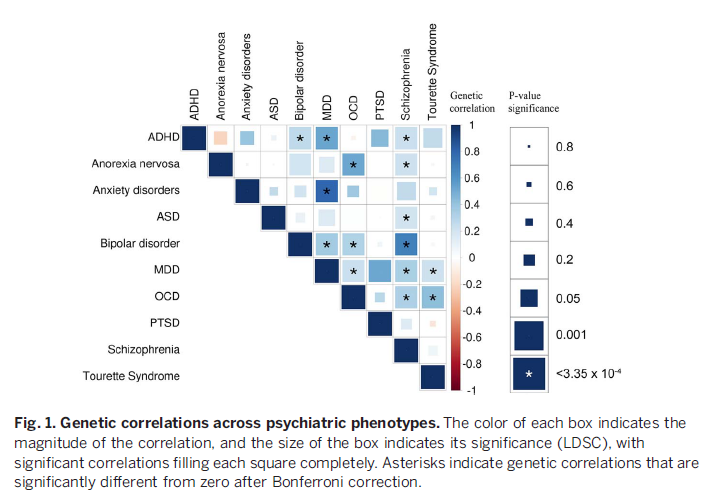 (Yes, I know this is a fairly large divagation from the topic of the question.)

Not the answer you're looking for? Browse other questions tagged addiction adhd dopamine self-control reward or ask your own question.

4
What are effective methods to overcome the initial psychological resistance towards an unpleasant task?
2
What is the most effective treatment for ADD and ADHD that excludes chemical prescriptions from a doctor?

2
What is the most effective treatment for ADD and ADHD that excludes chemical prescriptions from a doctor?