How are qualia localized in consciousness?

I understand that evolution incorporated arbitrary qualia into the default network to inform consciousness (the largest cranial global processing information subnetwork) about properties and qualities of the body in spacetime. However, how does the feeling in my toe know to appear near my toe when nerves there are stimulated? Is this an illusion, and there is extraneous processing that matches the visual stimulus of me looking at my toe and the tactile stimuli of someone touching it to make those qualia feel related, even localized in the same area in space?

What if my somatosensory cortex was moved to my stomach (say all dendrites and axons were chopped off and were replaced with wireless hubs that signaled to the newly transplanted somatosensory cortex in my stomach). I would presumably experience no change in consciousness, which indicated localization of qualia is not achieved by the spatial embedding of the neurons, but by their graph-theoretic interconnection.

Now what if in mad science I permuted the thermal sensors all over my body? Say my foot and hand neurons got swapped (say through a nanobot intercepting wireless relay). Would my hand feel cold when my foot is immersed in ice and vice versa? This would indicate these qualia are processed in consciousness in the brain rather than at the afferent sensor sites.

For bonus credit: How does this relate to phantom limb syndrome? Are there other observed processing defects that lead to faulty localization? E.g. Out of body experiences, certain particularly nasty mental disorders like dementia, rewiring of somatosensory map due to stroke, that engineering dean who wanted his arm chopped off (I forgot the name but I heard this from V.S. Ramachandran)

Second bonus credit: I've read "butterflies" in your stomach are serotonin releases in the enteric nervous system. Doesn't consciousness have to be informed of this release for you to feel it? If not, how do disconnected information graphs allow you the cohesive ability to feel in love?

This question has been unanswered for a long time and I will attempt to address the issues posed not one by one, as there are a great many questions, but with an overall working of the sensory nervous system with respect to topographic mapping. Moreover, the question uses a great many "suppose ifs" that have never, and most likely will never or cannot be tested. Therefore a basic overview of topographical mapping may shed light on the matter.

The somatosensory cortex is a highly topographically organized structure. Although warped in size, it basically contains an exact topographical map of the body, referred to as a homunculus: 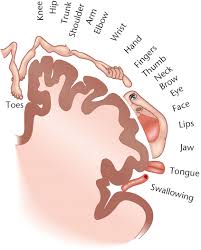 In other words, perceptions in the upper arm are represented very near to the lower arm representation in the somatosensory cortex. The motor cortex contains a very similar map.

Similarly, the visual cortices contain many maps representing the visual field, referred to as the retinotopic map. Likewise, the auditory system maps frequency space in a highly topographical manner (the tonotopic map).

Removing a part of the somatosensory cortex out of its context may wreck havoc on this ordered structure. For example, it has been shown by groundbreaking work from Michael Merzenich and colleagues that when the fingers of a monkey are sewn together, the finger representations in the sensory cortex also fuse, i.e., the border between the coupled fingers degrades and vanishes eventually. This experiment shows that when two separate bodily structures are repeatedly and structurally stimulated simultaneously, they fuse in the cortex. Upon separation, original mapping is restored (Allard et al., 1991). I consider this proof that adjacent structures influence each other's representations in the cortex because they often receive parallel stimulation. Coherent stimuli typically result in increased synaptic strength.

Phantom limbs are interesting indeed. For example, the groundbreaking work by Ramachandran focused on upper arm amputees. These folks would feel sensations in their (amputated) hand when their cheek was stimulated. In the homunculus it can be readily seen that facial representations are close to the hand representation. Upon deafferentation of the arm region in the cortex, surrounding bodily representations take over the 'silenced' regions, and the cheek region 'steals' the hand (which is relatively huge). However, interestingly, the cheek not only serves its own original representation, but refers now to the amputated hand as well. Hence, the memory of the hand lingers, showing once again that the bodily map is strongly imprinted in the brain and that it is not simply isolated from its context.

How then are visual and tactile stimuli fused as being correlated? This happens in the higher multi-sensory areas in the brain, the so-called association cortices such as found in the temporal lobe. 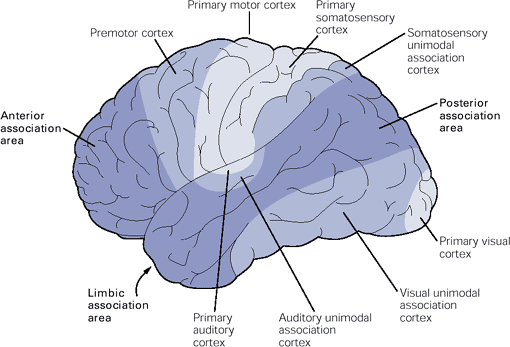 These higher areas will link various perceptions and merge them into coherent perceptions. Limbic association areas may couple the butterflies to love.

Conclusion
In all, qualia are localized in the brain by mapping sensory information onto highly organized topographic maps in the cortex. Changes in the periphery (e.g. amputations) will affect this cortical mapping due to plasticity and hence these cortical maps are plastic (subject to change). The reverse can never be easily tested (taking a piece of brain away will have gross consequences) as said, but I think that the quote "Neurons that wire together fire together" is important here. As said, synaptic strength increases when adjacent neurons fire in coherency and when taken apart their mapping will become distorted. Lastly, emotional feelings are combined with the physical sensation of butterflies in your stomach and synthesized into a holistic feeling of love, probably by the limbic association cortices and perhaps other association areas. in general, the association areas synthesize the various sensory systems by linking them, most likely due to experience.

Not the answer you're looking for? Browse other questions tagged neuroscience consciousness qualia or ask your own question.

52
What are current neuronal explanations and models of 'consciousness'?
5
How can machine possibly possess consciousness if computation is a human idea?
4
Definitions of consciousness
3
How does the physical brain know about qualia?
2
How do we imagine? How do images have qualia?
2
Does monism imply that computers can have consciousness?
0
Could bioinfomatics explain consciousness?