Why do teenagers take so many selfies? [closed]

I know that there is a similar question about this

But my question is different. In fact I'm talking about teenagers and I'm asking the causes of this fact, not if there is a correlation with narcissism.

Well, I've noticed that social network users are mostly female (I mean, people who post more selfies are girls). And in my school almost every girl (500 girls) posts selfies. Why? Why do they need it? Furthermore their photos are strange, they usually pose in a weird way. Here are some examples:

Then, why do girls post much more than guys?

The question you link to has an answer which says: "narcissism in US men" which is quite a different category than what you ask here. Selfie-ism or Selfitis is not a disorder, or by default narcissistic.

Why do [female] teenagers take so many selfies?

Statista, on their webpage "Selfies Are All About Appearance", reports on a Georgia Institute of Technology study of 2.5M Instagram selfies titled: "Selfie-Presentation in Everyday Life: A Large-Scale Characterization of Selfie Contexts on Instagram" (ICWSM 2017), by Julia Deeb-Swihart, Christopher Polack, Eric Gilbert, and Irfan Essa, that out of those whom do take selfies the percentages are 59% female and 41% male.

I'm asking the causes of this fact, not if there is a correlation with narcissism.

It's not all about appearance, only 52%; with 14% family, friends and pets, 13% about ethnicity or nationality, 7% travel, 5% health and fitness, with the remaining 9% falling into other categories.

For the appearance category the reasoning is:

The Georgia Tech study: "Selfies: We Love How We Look and We’re Here to Show You" offers these graphs showing the most popular selfie type and who shares the most selfies: 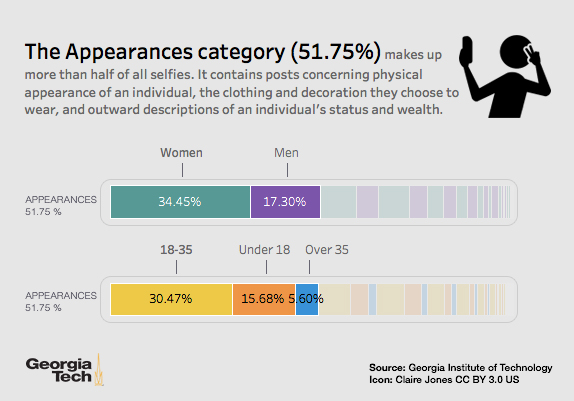 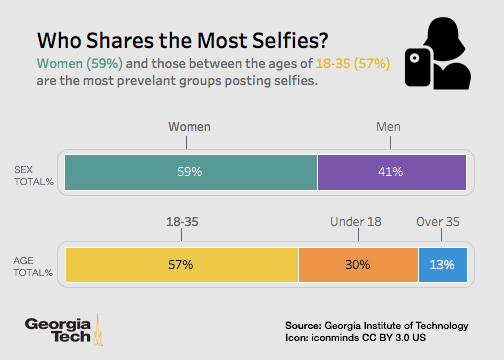 As you can see the belief that teen age girls share the most selfies is not correct.

It is the skew of the search engines that produces this belief, it not supported by studies.

Furthermore their photos are strange, they usually pose in a weird way.

See the result of using Google to search for "female selfies" - the results are not particularly different than the two examples you provided, nor would I describe them as weird. See the Selfie Explorer Tool (after the next paragraph) for an analysis of poses.

While not directly part of the question the website SuggestMe has a webpage regarding the travel aspect: "Tourists and locals love taking selfies in London" showing the top 10 most popular cities, places, and places per city. Establishing proof that one is worldly, sophisticated, versed in the ways of the world.

The "Selfie Explorer Tool" at SelfieCity allows you to generate requests for specific types of selfies based on attributes such as demographics, pose, features, or mood. It also shows which types are more prevalent.

"There are few harmless actions that seem to infuriate guys more than young women taking selfies.

And it is mostly young women who have been snapping pictures of their faces and posting them to Instagram since the social-media platform’s inception in 2010. In 2014, a survey by photography app Selfiecity revealed that in New York, 23-year-old females take the most selfies and 62 percent of selfies are taken by women. (That’s still less than in other cities — in Moscow, for instance, 82 percent of selfies depict female faces.)

Taking pictures of yourself is an action that harms precisely zero people, but you wouldn’t know that the way some people respond.

Male journalists regularly rail against the practice. ... There’s a fairly common refrain in these pieces that selfie takers are “narcissistic,” despite the fact that a 2017 study from Brigham Young University indicated that’s not generally true. As Alicia Eler points out in her new book “Selfie Generation” (Skyhorse Publishing), “Generally, it’s men telling women that they are narcissists for selfie-ing.” She further remarks that “young women are simultaneously told that their self-worth depends on their appearance, but they are referred to as ‘vain’ and ‘narcissistic’ if they post selfies, which are all about appearance.”

Psychology Today has an article: "Get Over Selfie Shame!" as does a NYTimes article: "The real reason men hate women taking selfies" and Snopes: "Rumor: The American Psychiatric Association has classified the taking of 'selfies' as a mental disorder" disagreeing with the snap diagnosis.

An important problem to acknowledge is the so-called "Snapshot Dysmorphia" a term coined by Drs. Susruthi Rajanala, Mayra Maymone, and Neelam Vashi, in "Selfies — Living in the Era of Filtered Photographs", where people visit plastic surgeons with selfies that have been adjusted by filters using a program such as Facetune and expect to receive surgery to look like their more perfect self.

The danger of taking selfies has prompted even the Russian government's Interior Ministry to offer a "Safe Selfie" guide:

Your health and your life is more valuable than millions of likes in social networks!

The Ministry of Internal Affairs of Russia is concerned about the increasing number of traumatizations and even deaths when trying to make a unique self. Each of these cases could be prevented. For this purpose, the Memorandum "Safe Self" was created in the Ministry of Internal Affairs of Russia, designed to draw attention, primarily to young people, to this problem. We tried visually, in the form of pictograms, to depict the most traumatic cases of creating selfies, thereby to warn citizens against unjustified risk for the sake of a memorable frame.

When a person tries to take a picture of himself - his attention is distracted, his balance is lost, he does not look around and does not feel danger. Do SELFI, making sure that you are in a safe place and your life is not threatened!

We hope that our initiative will be supported in all regions, will support young people, adults and children. 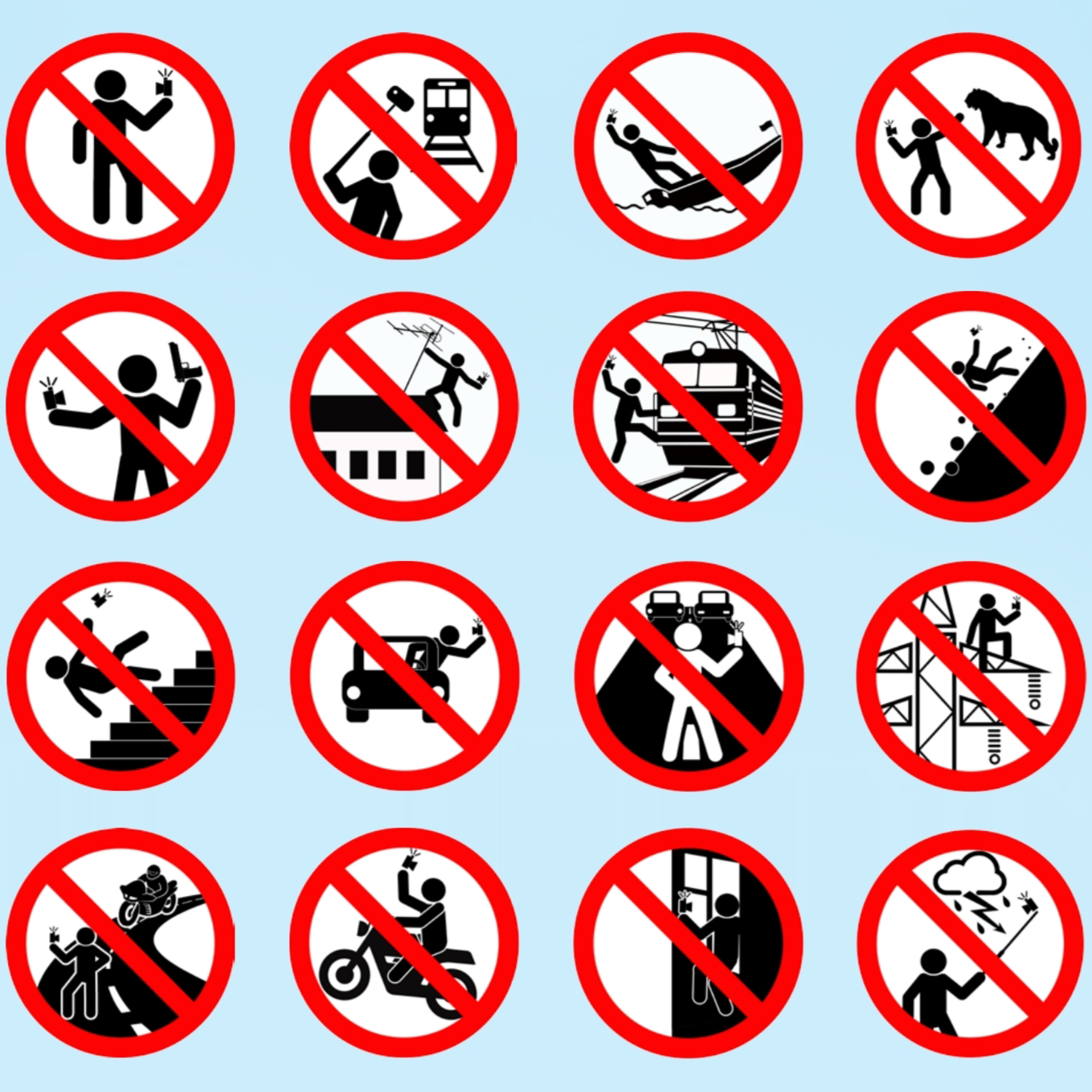 Not the answer you're looking for? Browse other questions tagged social-networks self or ask your own question.

10
Correlation between selfie and Narcissism

11
Why do teenagers take the internet and cyberbullying so seriously?
4
Why do we require social interaction/engagement?
3
Why would someone state that "self-esteem doesn't exist"?
1
Why a "weak homophilic relationships" can be amplified by "cumulative advantage"