Is there any research on brain waves when on Psilocybin Mushrooms or LSD?

Best start here: The entropic brain: a theory of conscious states informed by neuroimaging research with psychedelic drugs (2014). And then here is some more current literature worth exploring: Neural correlates of the psychedelic state as determined by fMRI studies with psilocybin (2012). Additionally:

Psilocybin reduced spontaneous cortical oscillatory power from 1 to 50 Hz in posterior association cortices, and from 8 to 100 Hz in frontal association cortices. Large decreases in oscillatory power were seen in areas of the default-mode network. Independent component analysis was used to identify a number of resting-state networks, and activity in these was similarly decreased after psilocybin. Psilocybin had no effect on low-level visually induced and motor-induced gamma-band oscillations, suggesting that some basic elements of oscillatory brain activity are relatively preserved during the psychedelic experience.

... Fig. 2h demonstrating the energy difference between LSD and PCB conditions ... For both effects, increased energy of high frequencies and decreased energy of low frequencies, the differences between each pair of conditions were found to be significant (p < 0.01 ...). ... Taken together, our results reveal that LSD increases the total energy of brain activity and expands the repertoire of active brain states by significantly increasing the activity of high frequency brain states. 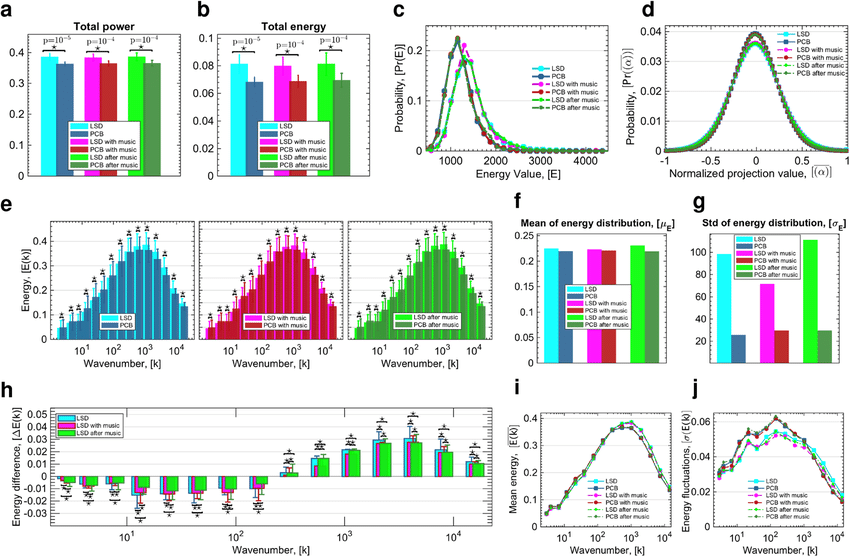 Not the answer you're looking for? Browse other questions tagged brain-waves psychedelics or ask your own question.

9
Do alpha waves vanish when I open my eyes in a dark room?
13
Are brain waves electromagnetic waves?
3
Any research backing alpha waves and impact on subconscious mind