Human vision detection of faint blinking or moving point of light, guidelines for sensitivity versus frequency

This question is in the neurology/neuroscience rather than the psychology aspect of this site.

I'd like to check the limits of visibility of a (presumably green) LED at large (kilometer) distance, and I'm assuming that modulation of intensity (blinking) or position ("wiggling") would make the same brightness noticeable at larger distances than a steady, stationary point of light.

My options are to vary the frequency and duty cycle of the pulses, and to alternately flash two different LEDs separated by a large enough distance that the point would appear to "wiggle" or move slightly either left/right, or up/down.

Neurologists and human visual processing researchers have studied the limits of visual detection of stimuli for quite a long time, and so the body of work is quite large and therefore beyond my scope of understanding.

Might there be a best frequency or range of frequencies for blinking or "wiggling" that the human vision system might be most sensitive to? I'm just guessing that it might be somewhere near the range of 1 Hz to 10 Hz, but I'm just guessing without any scientific basis.

As far as separation for the "wiggle" what might a best separation or range of separations that might be most noticeable?

An answer that points me to the underlying physiological phenomenon that I should read further about would be just as acceptable as numbers with supporting links. Because I'm not so familliar with the neurology of vision, I can't judge beforehand which way to cast the question.

Possibly helpful for context or background are my previous questions:

I'd like to check the limits of visibility of a (presumably green) LED at large (kilometer) distance, and I'm assuming that modulation of intensity (blinking) or position ("wiggling") would make the same brightness noticeable at larger distances than a steady, stationary point of light.

If you want to 'do the math' Wikipedia provides this webpage on attenuation coefficient, that allows you to calculate intensity versus distance in a medium.

As for your belief that green is most easily visible, that's not strictly true since the human eye has four photoreceptors each tuned to a different frequency, but a slightly different frequency of monochromatic light that was slightly brighter would be perceived as the same color.

It is wide spectrum light acting on different photoreceptors that is interpretated by the brain as being the seeing of a particular color. It's not what you see, it's what you (unconsciously) think you see. It's the addition of wide spectrum light between the frequencies of 498 and 534 nm acting on two photoreceptors that gives the impression that one color is brighter, when in fact it's a range, monochromatic light wouldn't be brighter. 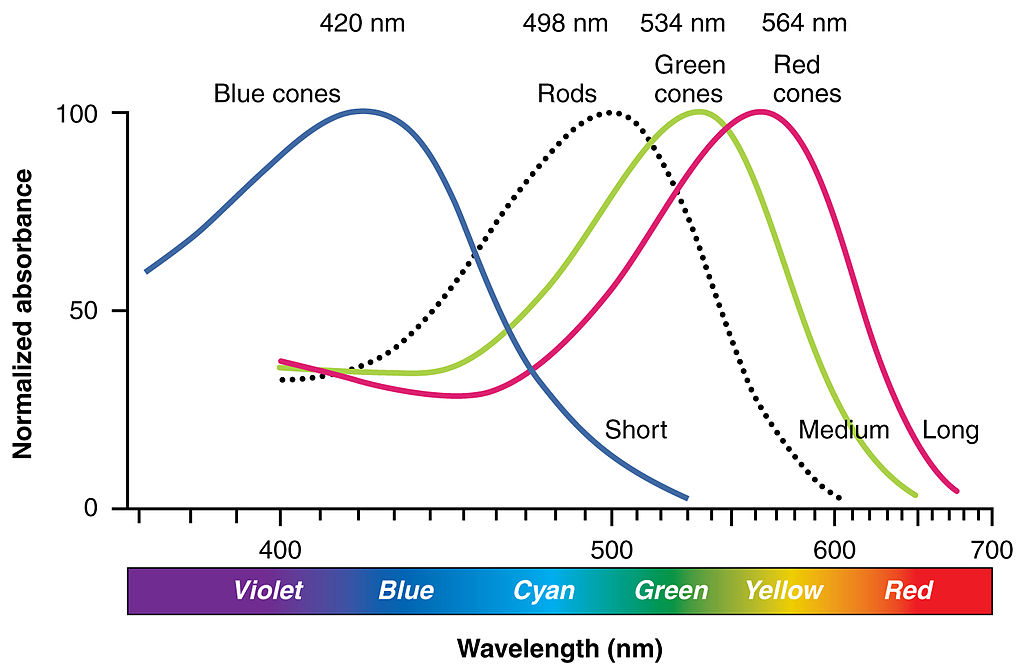 "The photoreceptor proteins in the three types of cones differ in their sensitivity to photons of different wavelengths (see graph). Since cones respond to both the wavelength and intensity of light, the cone's sensitivity to wavelength is measured in terms of its relative rate of response if the intensity of a stimulus is held fixed, while the wavelength is varied. From this, in turn, is inferred the absorbance.[15] The graph normalizes the degree of absorbance on a hundred-point scale. For example, the S cone's relative response peaks around 420 nm (nanometers, a measure of wavelength). This tells us that an S cone is more likely to absorb a photon at 420 nm than at any other wavelength. If light of a different wavelength to which it is less sensitive, say 480 nm, is increased in brightness appropriately, however, it will produce exactly the same response in the S cone. So, the colors of the curves are misleading. Cones cannot detect color by themselves; rather, color vision requires comparison of the signal across different cone types.

So you would want to use 4 different LEDs of 420, 498, 534, and 564 nm each to maximally stimulate each photoreceptor. You could just use a 'white' light with a green filter but that isn't efficient.

As you can see from the graphic, assuming no color blindness (which you probably want to consider) each photoreceptor is equally sensitive.

"In very low light levels, vision is scotopic: light is detected by rod cells of the retina. Rods are maximally sensitive to wavelengths near 500 nm, and play little, if any, role in colour vision. In brighter light, such as daylight, vision is photopic: light is detected by cone cells which are responsible for colour vision. Cones are sensitive to a range of wavelengths, but are most sensitive to wavelengths near 555 nm. Between these regions, mesopic vision comes into play and both rods and cones provide signals to the retinal ganglion cells. The shift in colour perception from dim light to daylight gives rise to differences known as the Purkinje effect

The perception of "white" is formed by the entire spectrum of visible light, or by mixing colours of just a few wavelengths in animals with few types of colour receptors. In humans, white light can be perceived by combining wavelengths such as red, green, and blue, or just a pair of complementary colours such as blue and yellow.

That is how the simplified explanation: "green is brighter" comes about. 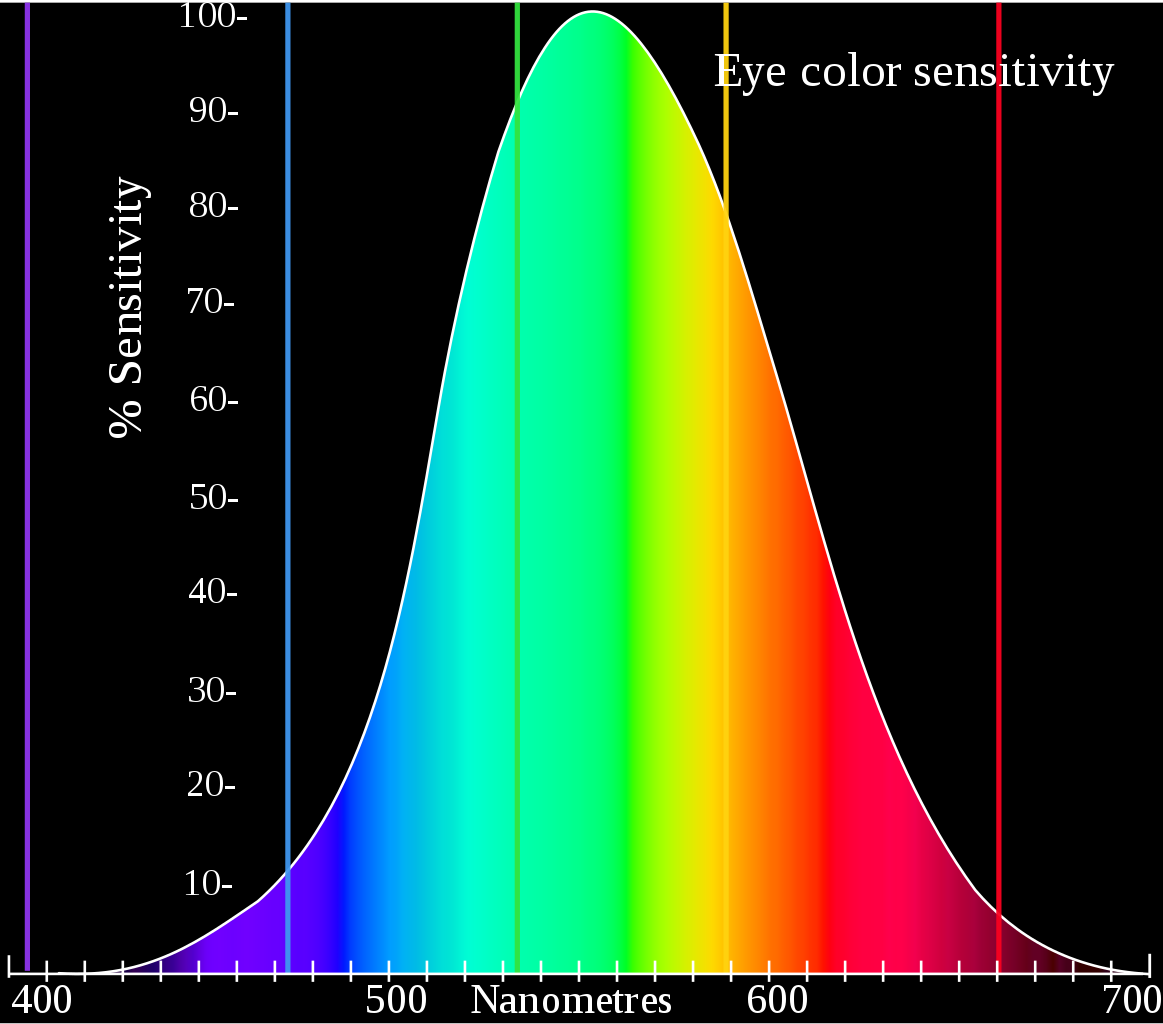 Photopic relative brightness sensitivity of the human visual system as a function of wavelength (luminosity function).

Having decided upon using a wide spectrum light with a filter or four separate LEDs of a particular frequency we come to flash rate.

Way too slow leaves a lot of 'off time' which saves power but might make it less noticeable (though speed of travel is also a consideration, lighthouses flash slowly and ships travel slowly).

Moderately fast and you run the risk of photosensitive epilepsy (PSE), in particular red light at 4 Hz is most likely to affect 1 in 3000 people.

Continuous light is power inefficient and not attention grabbing, how well would a distant green light with a background of tall trees be seen?

Physiologically amber is the color chosen to avoid red green or blue and is common for stobe lights used on warning signs. Amber is not 'calming blue', 'stimulating / annoying red' nor 'overabundant green'.

The "Manual on Uniform Traffic Control Devices: Inserts Only", by the Department of Transportation, Federal Highway Administration is worth a look.

The approved, presumably well tested by many Standards over many years, road sign is designed and described this way in North America: 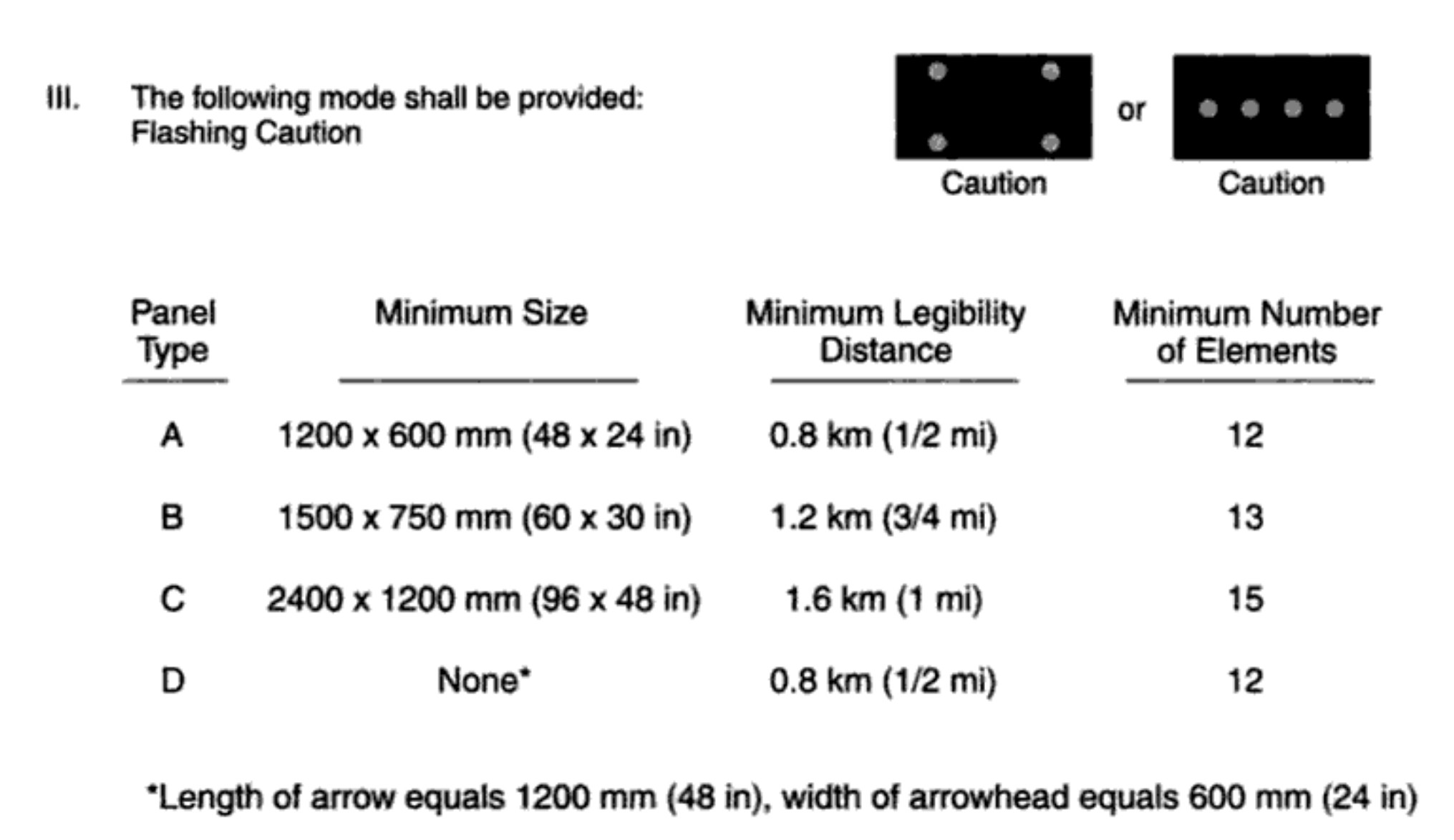 Choosing a ready made strobe light will save the time and cost of designing your own.

Not the answer you're looking for? Browse other questions tagged neuroscience vision stimulation or ask your own question.

19
Is there a region of cortex which over a period of development becomes the seat of self?
4
If the optic nerve transmits to both hemispheres, how do split-brain experiments work?