How does a female measure her own attractiveness?

But how does a female gauge her own attractiveness in the first place?

What would make sense is that in the first few years of adult life a female should simply reject all advances. A process of simply collecting statistical data on her own attractiveness.

Does any of this correspond to reality?

In our research on mate search strategies, colleague Peter Todd and I found that a rule we call "Try a Dozen" performs as well as the 37 percent rule under a wide range of conditions. Try a Dozen is simple: interview a dozen possible mates, remember the best of them, and then pick the very next prospect who is even more attractive. You do not have to estimate the total number of potential mates you will encounter in your reproductive lifetime; you only have to bet that you will meet at least fifty or so. Humans seem to follow something like the Try a Dozen rule: we get to know a number of opposite-sex friends during adolescence, fall in love at least once, remember that loved one very clearly, and tend to marry the next person who seems even more attractive. Each individual is "satisficing"- looking for someone who is pretty good and good enough, rather than the absolute best they could possibly find. But at the evolutionary level, these satisficing rules impose sexual selection that is almost as strong as the most complicated, perfectionist decision strategy.

I also turned up a 1998 review by Miller and Todd "Mate Choice Turn Cognitive", which does get to mating strategies in its final pages, best summarized by: 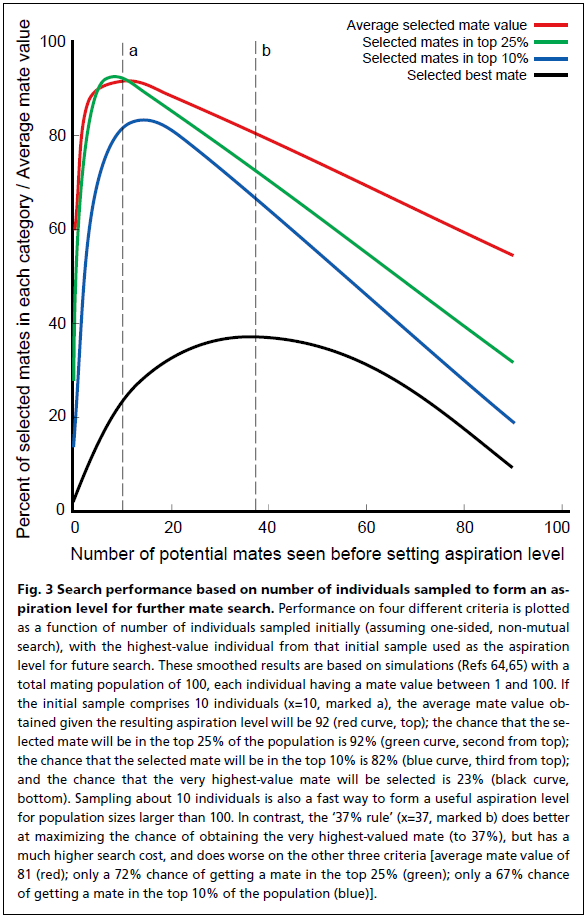 By sampling a much smaller number of prospects initially, say a dozen, one can actually attain a higher expected mate value than the 37% rule delivers (although a lower chance of finding the very highest-valued prospect), with much lower search costs and a much lower risk of being stuck with a low-value mate[64,65] (Fig. 3).
More importantly, the ‘secretary problem’ ignores the problem that a prospect you desire may reject you. This mutual choice constraint makes the search much harder[64,65]. Game-theory models of ‘two-sided matching’ address these complexities[61] directly, and propose various search strategies which guarantee that a population reaches a ‘stable matching’: a pairwise assortment of individuals where no individual would prefer to be mated with someone else who would also prefer to be mated with them. However, two-sided matching models typically assume strict monogamy (no ‘extra-pair copulations’), complete information and exhaustive preferences: everyone has complete, consistent, transitive preferences across all possible prospects that they encounter.

So yeah, the problem is not that simple (as optimal stopping) if one considers mating a game (in the sense of game theory). I haven't yet looked at the latter line of research... but it's a whole book. The idea seems centered on the stable marriage problem. An optimal algorithm also involves a number of rounds, with rejection and "maybe" answers; from Wikipedia:

So, Miller and Todd cleary don't think this stable marriage problem is too relevant for reality. Unfortunately, by the time of their review (which is now two decades old), there's wasn't much else proposed that was taking into account the mutual-choice aspect of mating and the "satisficing" nature of human choice in general (that Miller and Todd favor).

Not the answer you're looking for? Browse other questions tagged sexuality or ask your own question.