Are there any benefits to having Obsessive-Compulsive Disorder?

OCD is a chronic mental health disorder. It is a major handicap when trying to lead a normal life.

But are there any positive effects of having the disorder? Is there any such thing as high functioning OCD?

I'm guessing that OCD correlating with conscientiousness is probably an advantage. The 2015 study by Inchausti et al. that made this finding had other anxiety disorders as controls. I don't know if that difference still holds vs the general population... An older paper (Samuels et al., 2000) found negatively in this direction. As summarized in Rector et al. (2002):

To our knowledge, examination of the FFM [five factor model] in OCD has occurred only recently in a single epidemiological study (Samuels et al., 2000). Participants with a lifetime diagnosis of OCD were compared with community participants without a lifetime history of OCD and matched on gender, race, and age. Patients with OCD were found to score higher on neuroticism (all facets) and lower on extraversion (i.e. assertiveness facet only) versus community controls. In addition, participants with OCD were found to be less agreeable, although no differences were observed on the domains of openness and conscientiousness.

Rector et al. themselves did a fairly complicated study in which they found that OCD patients (surprisingly) had below average conscientiousness (compared to non-ill controls) but this turned out to mirror the patients' level of depression; while a simple F-test between groups was statistically significant, a MANOVA with the depression score as covariate was not. The graph below is kinda suggestive of that because the conscientiousness subscores for OCD and major depression look pretty similar. 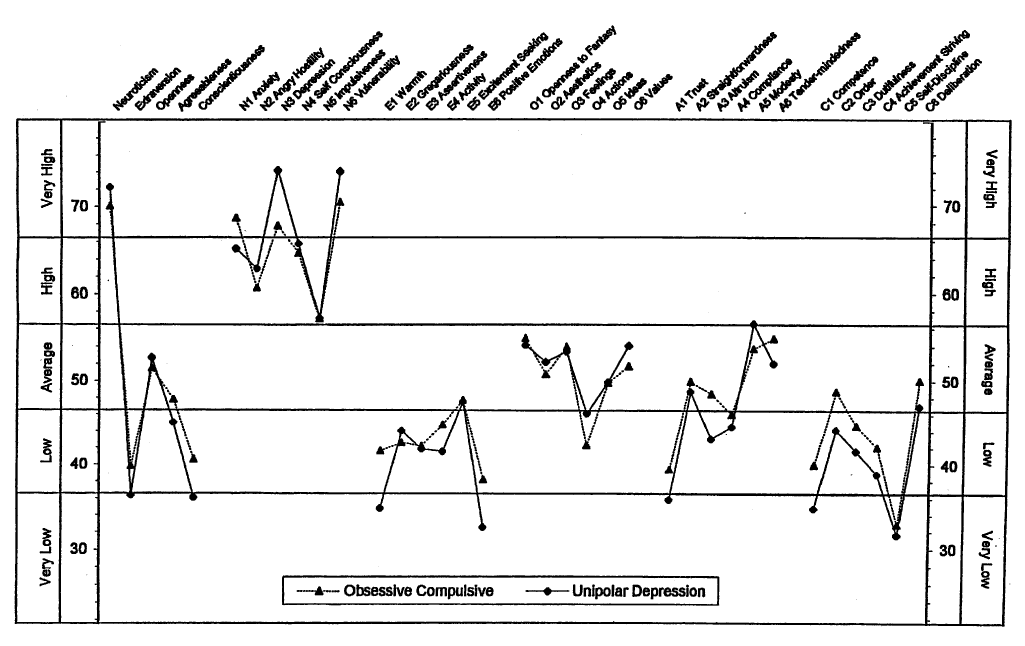 Rector et al. did not exclude OCD patients with comorbid depression (or vice-versa), which explains well enough the above because:

Which kinda makes it difficult to get meaningful results from such studies... do we (only) care what the personality advantages/traits of those OCD but without depression are? Etc.

As the paper explains there's however disagreement in the literature whether it is appropriate to distinguish maladaptive vs adaptive perfectionism (this paper obviously takes the view that the distinction makes sense).

There are some blogs that assert that OCD is correlated with higher IQ. But while looking into this I found a press release for recent (2017) meta-analysis to the contrary:

Obsessive-compulsive disorder (OCD) is not associated with a higher intelligence quotient (IQ), a myth popularized by Sigmund Freud, according to researchers at Ben-Gurion University of the Negev (BGU), Texas State University and University of North Carolina at Chapel Hill.

The study, published in the Neuropsychology Review, is believed to be the first analysis of existing data on the link between IQ and OCD sufferers verses the general population. The authors tracked the origins of the myth to the French philosopher, physician and psychologist Pierre Janet in 1903, but it was Freud, the father of psychoanalysis, who popularized the hypothesis in 1909.

"Although this myth was never studied empirically until now, it is still a widely held belief among mental-health professionals, OCD sufferers and the general public," says Dr. Gideon Anholt, a senior lecturer in BGU's Department of Psychology.

The researchers conducted a meta-analysis of all the available literature on IQ in OCD samples versus non-psychiatric controls (98 studies), and found that contrary to the prevailing myth, OCD is not associated with superior IQ, but with normative IQ that is slightly lower compared to control samples. The authors suggested that the small reduction in IQ scores in OCD sufferers may be largely attributed to OCD-related slowness and not to intellectual ability.

The popular misconception about OCD has been further promoted by TV programs like "Monk," which show an individual with OCD using his superior intelligence to solve challenging mysteries. Yet, such beliefs about OCD may facilitate the misconception that there are advantages associated with the disorder, potentially decreasing one's motivation to seek professional help.

And the actual meta-analysis:

Across studies, small effect sizes were found for FSIQ and VIQ, and a moderate effect size for PIQ, exemplifying reduced IQ in OCD. However, mean IQ scores across OCD samples were in the normative range. Moderator analyses revealed no significant moderating effect across clinical and demographic indices. We conclude that, although lower than controls, OCD is associated with normative FSIQ and VIQ, and relatively lowered PIQ.

Likewise there are popsci assertions (e.g. the aforementioned blog) that OCD correlates with creativity. It wasn't too hard to find a study that supports at least some of that

OCD was unrelated to the self-rating [of creativity] but was correlated with the Biographical Inventory of Creative Behaviours.

And interestingly this study also found OCD correlating positively with conscientiousness. I personally don't see the correlation with BICB they found as significant because there's no mention of correcting for multiple comparisons and there are well over 20 comparisons made:

The problem with studying creativity with statistics is that there hasn't been a widely accepted test for creativity. I remember trying to answer here a question on the link between schizophrenia and creativity (let me see if I can find the link). The results were all over the place depending on what measure of creativity was used. And due to the varied measures, no luck in finding a meta-analysis. Even for disorders much more popularly associated with creativity, e.g. bipolar or schizophrenia, there are serious methodological concerns which prompt continued skepticism in some (but not all) researchers.

Not the answer you're looking for? Browse other questions tagged clinical-psychology or ask your own question.

10
Is there a conflict between Mindfulness-based and Acceptance-based Therapies and Cognitive Behaviour Therapy (CBT)?
0
Why isn't psychotherapy more direct with patients?
5
Are there any circumstances where schizophrenia or bipolar disorder are not lifelong?
2
Comorbidity of Neurodevelopmental Disorders between them and Obsessive Compulsive Disorder and Obsessive Compulsive Personality Disorder
0
What is the difference between personality disorder and other types of mental illness?
1
Relationships Between Specific Behavioral Characteristics Associated With Clinical Diagnosis of Narcissists & Sociopaths