When I was in high school, one of my teachers used to make us hand print copies of materials from transparencies on an overhead projector (I may be showing my age), with the reasoning that re-writing notes by hand was better for memory retention.

I later was told, via sources I can no longer recall, that typing out notes wasn't as good for memory retention because it was too easily done without thinking. Hand printed/written notes, I was told, were superior because they forced you to think about the words and letters being written, whereas typing uses more or less the same actions for each character and can be done faster with less conscious thought. Anecdotally, I know I certainly type faster than I write, and am better able to multitask as I do.

In contrast to your theory, there was a main effect of transcription method, such that typing notes led to better retention. However, there was an interaction with context, and it appears that there is no simple main effect for textbook notes. (see figure below)

One could posit that this interaction occurs because of the demands of the task. Taking notes by typing is easier and faster, i.e. more fluent. Hand-writing notes leads to higher cognitive load, which may lead to the student paying more attention to note-taking and less attention to the lecture itself. This would explain why textbook notes showed no effect. I only skimmed through the paper, but it seems very interesting and right to the point of your question, so I would suggest reading it for more info.

Before looking this up, I expected the opposite pattern. Bjork & Bjork (2009) have found that creating desirable difficulties in learning can promote retention. For instance, it is well known that generating information, such as fill-in-the-blanks, promote better retention compared to, e.g., multiple choice tests. Diemand-Yauman, Oppenheimer, & Vaughan (2010) have found that presenting study material in hard-to-read fonts leads to better encoding and retention of the material.

Similarly, a study by Yang, Gallo, & Beilock (2009) looked at the effect of motor fluency on retention. Subjects typed a two-letter dyad (such as ae or aq). Fluent dyads were letter pairs which were typed with two fingers; these pairs are typed faster and more easily than dyads that used the same finger because there is no motor bottleneck. Subjects were later given a recognition test to determine which dyads were presented to them. They found that subjects produced more false alarms for fluent dyads than disfluent dyads. This is particularly strange because false alarms, by their nature, were not actually typed by subject. This effect only held for expert typists, corroborating previous literature which suggests that fluency leads to false recognition. (Presumably for novice typists, none of the dyads were fluent enough to produce a higher level of false alarms).

So it seems there is a confluence of effects here. Disfluency--that is, making things more difficult--can promote deep processing and lead to better encoding and retention. However when this process causes one to neglect other information, such as paying attention to the lecture itself, retention suffers.

For additional reading on the effects of fluency on problem solving, I suggest Alter, Oppenheimer, Epley, & Eyre (2007) and Oppenheimer (2008). 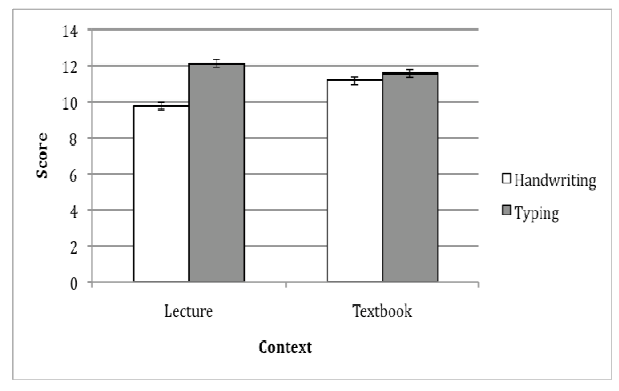 Schoen, I. (2012). Effects of Method and Context of Note-taking on Memory: Handwriting versus Typing in Lecture and Textbook-Reading Contexts. Pitzer Senior Theses. Paper 20. PDF

Not the answer you're looking for? Browse other questions tagged memory learning educational-psychology writing or ask your own question.

20
Does dream recall disturb the processes of memory consolidation?
8
How does syntax highlighting affect the learning of a new programming language?
5
How long does the trace of a memory last in the brain?
10
Does the number of alternatives in a multiple choice question affect the learning output?
6
Does training affect the tactile oblique effect?
4
Does the use of cannabis affect the ability to recall dreams?
1
In which way does what you do right after class affect knowledge retention?