Whereabouts in the brain gets triggered/switched on when an addictive substance is ingested/taken. I'm doing an addiction study with a couple of colleagues and would like some help with it.

The easy-to-read, entry-level references that you can use are probably How Drugs Affect the Brain and Central Nervous System and Drugs and the Brain. For in-depth references, you can search for the literature on each specific drug at NCBI.

Whereabouts in the brain gets triggered/switched on when an addictive substance is ingested/taken.

Irrespective of their particular pharmacology, the one thing that all drugs of addiction have in common is that they will all converge onto a single common neural substrate, the mesolimbic dopamine pathway.

The mesolimbic pathway has dopamineric projections from the ventral tegmental area (VTA) to the nucleus accumbens.

There are other projections from the VTA to the frontal lobe, but the mesolimbic pathway is between VTA and nucleus accumbens. 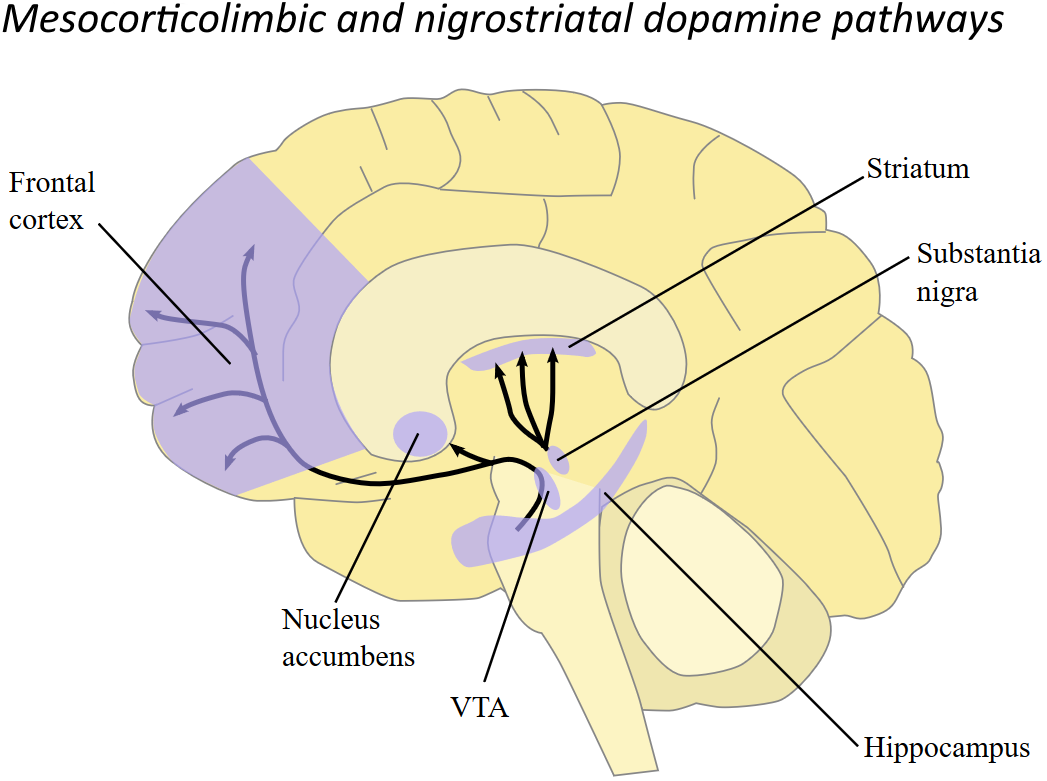 This pathway is also called the "reward pathway" of the brain and is why dopamine is commonly associated with "pleasure". However, thinking about things this way is very misleading because it's thought that the mesolimbic pathway has less to do with pleasure or reward, and more to do with the salience of stimuli e.g. food or sex.

The involvement of this common pathway in all drugs of addiction has influenced the thinking of addiction as a disorder of incentive salience.

Briefly, administration of a drug of addiction will activate the mesolimbic pathway, imbuing the drug and any associated cues, with salience. With repeated exposure to the drug, a peculiar phenomenon will occur. Even though the user might subjectively report tolerance to the drug, there will be greater activation of the mesolimbic pathway than the first time they had taken the drug. The process of increased responsiveness to the same drug dose after repeated dosing is referred to as receptor sensitisation and may reflect the process by which use of a drug transitions to addiction.

The Incentive Sensitization Theory of Addiction was proposed in 1993:

The neural basis of drug craving: An incentive-sensitization theory of addiction

This paper presents a biopsychological theory of drug addiction, the ŌĆśIncentive-Sensitization TheoryŌĆÖ. The theory addresses three fundamental questions. The first is: why do addicts crave drugs? That is, what is the psychological and neurobiological basis of drug craving? The second is: why does drug craving persist even after long periods of abstinence? The third is whether ŌĆśwantingŌĆÖ drugs (drug craving) is attributable to ŌĆślikingŌĆÖ drugs (to the subjective pleasurable effects of drugs)? The theory posits the following.

(3) In some individuals the repeated use of addictive drugs produces incremental neuroadaptations in this neural system, rendering it increasingly and perhaps permanently, hypersensitive (ŌĆśsensitizedŌĆÖ) to drugs and drug-associated stimuli. The sensitization of dopamine systems is gated by associative learning, which causes excessive incentive salience to be attributed to the act of drug taking and to stimuli associated with drug taking. It is specifically the sensitization of incentive salience, therefore, that transforms ordinary ŌĆśwantingŌĆÖ into excessive drug craving.

(4) It is further proposed that sensitization of the neural systems responsible for incentive salience (for ŌĆśwantingŌĆÖ) can occur independently of changes in neural systems that mediate the subjective pleasurable effects of drugs (drug ŌĆślikingŌĆÖ) and of neural systems that mediate withdrawal. Thus, sensitization of incentive salience can produce addictive behavior (compulsive drug seeking and drug taking) even if the expectation of drug pleasure or the aversive properties of withdrawal are diminished and even in the face of strong disincentives, including the loss of reputation, job, home and family. We review evidence for this view of addiction and discuss its implications for understanding the psychology and neurobiology of addiction.

Not the answer you're looking for? Browse other questions tagged neuroscience theoretical-neuroscience addiction or ask your own question.