What neural mechanism explains the tendency to visually attend to the whole scene before attending to details?

I have the intuition that human vision first attends to large-scale objects and then small-scale details. Is there any mechanism in the visual cortex that will explain this phenomenon? Is there a resolution refinement process when we look at scenes?

First, it is not only your intuition - there are many experimental results showing that we first perceive the gist of scenes (for example, is it outdoors or indoors?), then the major parts of it (was there an animal, or a human figure in it?) then more and more details (is that figure male or female? what is her expression?) [1] [2]. Note, however, that it is not exactly related to the size of the object, but more to its perceived importance or relevance. (See also this great video about change blindness, that exemplifies that)

Reverse Hierarchy Theory [3] proposes a mechanism for that - the activation in the network flows mostly "bottom up", but conscious perception starts at higher level, and then actively (through attention) accesses "lower level" details as they are needed. or in their words:

Classically, the visual system was seen as a hierarchy of cortical areas and cell types. Neurons of low-level areas (V1, V2) receive visual input and represent simple features such as lines or edges of specific orientation and location. Their outputs are integrated and processed by successive cortical levels (V3, V4, medial-temporal area MT), which gradually generalize over spatial parameters and specialize to represent global features. Finally, further levels (inferotemporal area IT, prefrontal area PF, etc.) integrate their outputs to represent abstract forms, objects, and categories. The function of feedback connections was unknown. Reverse Hierarchy Theory proposes that the above forward hierarchy acts implicitly, with explicit perception beginning at high-level cortex, representing the gist of the scene on the basis of a first-order approximate integration of low-level input. Later, explicit perception returns to lower areas via the feedback connections, to integrate into conscious vision with scrutiny the detailed information available there. Thus, initial perception is based on spread attention (large receptive fields), guessing at details, and making binding or conjunction errors. Later vision incorporates details, overcoming such blindnesses

The phenomenon you describe is called the global precedence effect, and was first studied extensively by David Navon (1977). One way to measure this effect is to create conflict between global and local features. For example, Navon presented observes with letter stimuli that were globally organised into different letters, such as; 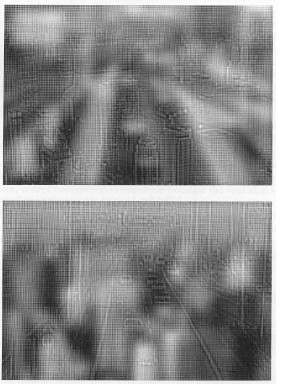 What is interesting about the study conducted by Schyns and Oliva is that it provides a evidence for a neural explanation for why global features dominate over details. This explanation is based on two cell types that exist in the retina the send axons to the thalamus in the brain. These cell types are roughly divided into two types: the larger magnocellular neuron, and the smaller parvocellular neuron. These cell types have different spatial preferences and temporal characteristics. Mangocellular neurons prefer low spatial frequency inputs and show a rapid, transient response. Parvocellular neurons on the other hand prefer colourful, high spatial frequency input and show a slow, sustained response. So the idea is that the magnocellular pathway rapidly carries coarse, low spatial frequency information to the brain to form an initial interpretation of the world. This interpretation is then compared to the more detailed information carried by the parvocellular pathway as it arrives in the cortex.

Human vision is more accustomed to first see things that move. So, considering both large scale objects and small scale objects are present in the vision field, the object will shows the first sign of movement will be first attended by the visual cortex. I believe this is because of the evolutionary process where human were hunters and mind evolved to detect any animal movement in the periphery.

Not the answer you're looking for? Browse other questions tagged cognitive-psychology neuroscience vision attention or ask your own question.

19
Is there a region of cortex which over a period of development becomes the seat of self?
10
Images on personal computers - Which aspect of size to keep constant?
6
Does the structure of consciousness mimic that of the visual process?
6
Computational model of biological object recognition
4
Does the human visual system implement (adaptive) histogram equalization?
1
Human vision detection of faint blinking or moving point of light, guidelines for sensitivity versus frequency