Are there psychological explanations for people being drawn to neo-nazism or other bad ideologues?

Are there psychological explanations for people being drawn to neo-nazism or other bad ideologues?

Since surely the people are not believing in them for no reason. But what is it that they try to achieve through such ideologues? Are these people "sane"?

There are a few questions here which are related:

I will try and put some time aside to build a more full answer with references, but to give a starter, there are a lot of studies on this subject starting with conformity studies such as the Milgram Experiment (here is a documentary on the experiment) and the Stanford Prison Experiment.

Philip Zimbardo who was in charge of the Stanford Prison Experiment wrote the book "The Lucifer Effect: Understanding How Good People Turn Evil" and led a talk on his research on the subject including other examples, but the biggest one for me was turned into a movie in Germany called Die Welle, and in English under the name The Wave.

The movie covered the true story of an experiment with a group of school children who wanted to understand the very same question you are asking, not believing it could happen today. Things turned nasty and out of control.

Teacher, Ron Jones's "Third Wave" experiment, which took place at a Californian school in 1967 was put together to explain how the German population could accept the actions of the Nazi regime during the Second World War. He founded a totalitarian, strictly-organized "movement" with harsh punishments that was led by him autocratically. The intricate sense of community led to a wave of enthusiasm not only from his own students, but also from students from other classes who joined the program later. Jones later admitted to having enjoyed having his students as followers. To eliminate the upcoming momentum, Jones aborted the project on the fifth day and showed the students the parallels towards the Nazi youth movements. 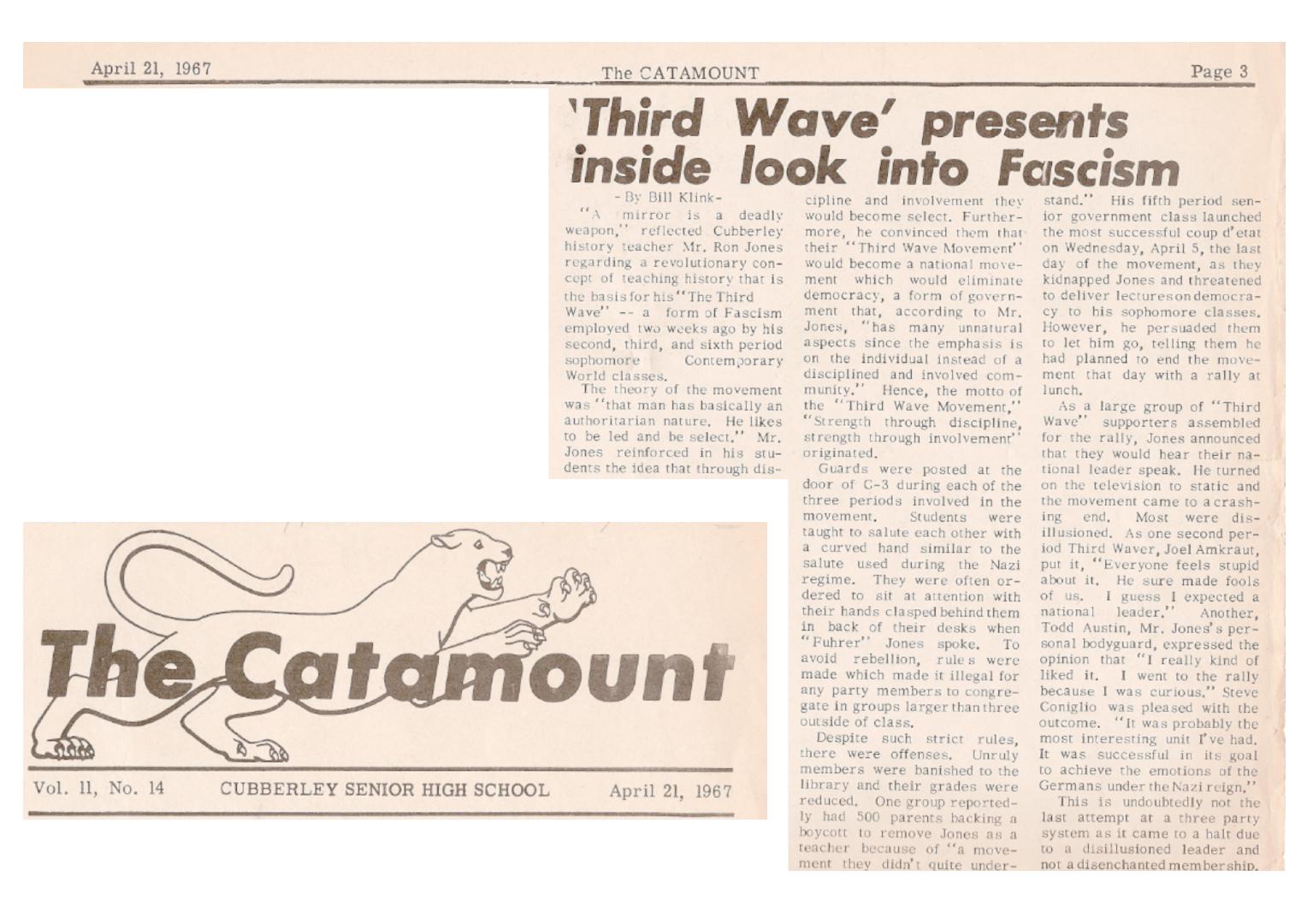 All of these studies and experiments provide strong proof that the risk of full Nazi style regimes can return on a national level given the right circumstances.

Lesson Plan Movie
The documentary by the students and teacher of “The Third Wave” (aka “The Wave”)
(http://www.lessonplanmovie.com)

Milgram style conformity and Zimbardo's prison both relied pretty heavily on authority figures. A different mechanism is explored by the minimal group paradigm: people just seem predisposed to form in-groups and out-groups on the flimsiest pretexts. Although it's a different mechanism, in real life they're not independent. Zimbardo's work could be interpreted as an exercise in creating pretexts for this kind of arbitrary-group-formation tendency. (Although Milgram really was all about authority figures)

You can look at a number of theories that can explain why people find neonazism seductive.

Schizophrenia- meaning they're delusional. Social Bond theory- who they respect and bond with Attachment theory- bonded with a White supremacist caretaker Belongingness- the need to belong The idea of manifest destiny and the historical oppression of minorities among others.

I'll edit when I can think of more.

Not the answer you're looking for? Browse other questions tagged political-psychology or ask your own question.

3
Any research on brain's processes involved in evil actions?
2
Why do our brains act in such a evil way sometimes that hurts other people?
3
Is the Stanford Prison Experiment considered valuable by modern psychologists?
1
How does people's sense of right and wrong affect their behavior?

6
How to design ballot papers with a large number of candidates in a preferential system?