It's widely claimed that hypnosis is a state of highly focused attention.

But I've also seen many claims that the hypnotic state is about accessing the subconscious mind directly, essentially "bypassing" consciousness.

However there lies a dissonance; all the material I ever read about focus (mostly from Daniel Goleman and Leonard Mlodinow) indicates that focus is a conscious phenomenon.

Can anyone please clarify?

When I was learning about the basis of hypnosis in formal training, I was taught to visualise the mind as the following diagram 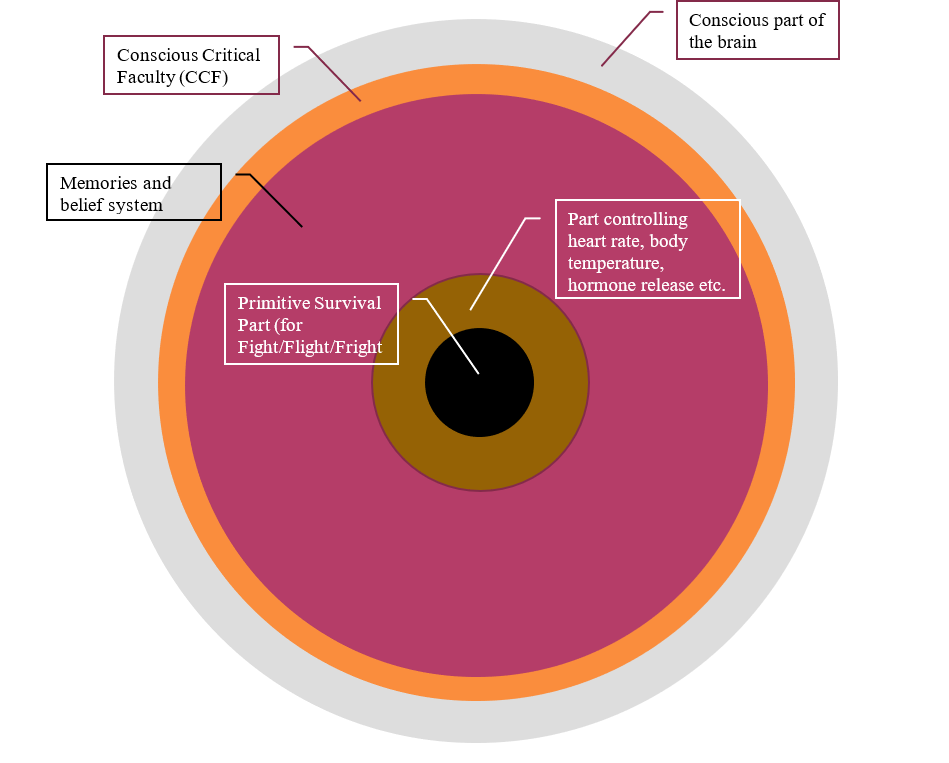 Formation of our beliefs and morals

As we get older and start to be able to wander around and explore our environment our parents tell us things such as “Don’t touch that it’s hot” or “Don’t eat that or you will be ill”. We were told that the grass is green and the sky is blue. Cultural influences start playing a role too such as the idea that pink is a girls colour and blue is for boys, Barbie dolls are for girls and action men are for boys. We took those ideas on as literal truth.

As we got older, experiences begin to confirm some of those ideas. Some got hurt by the heat of a cup of tea. Some got ill from trying the berries we were told not to eat. In these ways we had a model of the world confirmed and constructed.

Some of those beliefs were absolutely correct, we tested the ideas and had them confirmed by outside sources. Some beliefs may have been left untested but nevertheless all the beliefs in turn developed what many call the, Conscious Critical Faculty (CCF) (Watts, n.d.).

Take a situation where comments from adults, taught someone when they are a child, that they are selfish, unattractive or lacking intelligence. Once these ideas have taken hold it is very difficult to try and change these beliefs at a conscious level and remove them from the subconscious mind as the CCF will take over and reject opposing beliefs. This can be damaging to the confidence and opportunities in that persons adult life. This is why it’s so easy to give advice but so difficult for some others to take it even when you know it is correct. For a more effective way of doing this, we need to bypass the Conscious Critical Faculty in order for the correct belief system to be accepted.

There are a number of ways that new information can be pushed past the CCF. (Burns, 2009)

Selfishness and altruism, attractiveness and unattractiveness, intelligence and lack of intelligence etc. taught as a child or later instilled in adult life is often a result of repetitive comments. The same goes for trust and distrust in certain people or animals. How this happens is for example:-

Repetitive affirmations and confirmations over time can rectify falsehoods in belief systems.

Shock that someone may experience as a result of a traffic accident for example, can induce unhesitating acceptance of thoughts and beliefs. (Burns, 2009) If the thought is given where someone says “that looks bad, I bet that hurts” then of course they will become extremely aware of the pain and in turn may develop a severe aversion to getting into a car again. Other traumas can have similar effects.

If you look at someone suffering from the trauma of war, rape or sexual assault, this trauma will lodge the memory of what happened straight in the subconscious and develop either conflicting belief systems which cause more problems, or immediately alter the belief system completely. Counselling sessions can dredge up those painful memories and the resulting shock induced can open the client to opposing thoughts and beliefs which can help to correct the faulty belief system.

Hypnosis is a natural state of mind where acceptable selective thinking is established, concentration is enhanced and the Conscious Critical Factor is bypassed, opening the subconscious mind to suggestion. With the subconscious mind open to suggestion without interference by the CCF, therapy will be able to work more quickly (Watts, n.d.) by installing correcting belief systems.

The hypnotic state can be induced by reading, carrying out a repetitive task or listening to a hypnotherapist’s hypnotic induction routine. Watching television can induce a hypnotic state which helps to explain how effective on-screen advertising can be.

I would model it as an extreme, prolonged version of captivation.

The conscious mind goes on a tea break when there is loud, rhythmic music with synchronized light effects, stimulus that overwhelms the mind so it likely gives up trying to process it at a high level, and instead “goes along” with it... dancing, etc.

Dissecting when someone becomes highly-attracted to someone else.. external distractions are eliminated, perception of time slows down, the sympathetic nervous system activates strongly to record the event long-term, the superego and most of the ego fall silent and whatever happens at the focus basically goes in to the mesmerized essentially verbatim as they perceived it.

Shaky speculation land: Maybe the evolutionary psych purpose could be allowing true-believer followers to experience unquestionably loyal to their cult leader? Or a mate to another mate. Even a mentor to mentee. ¯\_(ツ)_/¯

Not the answer you're looking for? Browse other questions tagged consciousness attention unconscious hypnosis concentration or ask your own question.

10
Does hypnotherapy/hypnosis, in any form, for any type of disorder, work?
7
Are there any proven ways to increase concentration and focus?
8
Can hypnosis stop cigarette smoking?
2
What is happening when i focus my attention on a particular body part?
4
The relationship between creativity and focus
3
How to measure and quantify concentration or focus?
2
Difference between concentration and attention