How does the brain generate answers to questions?

Firstly, I would say that this question is probably beyond current knowledge.

But I would like to hear the latest theories.

Given an input "Can you name as many animals as you can until I say 'stop'?" to a human.

If the person giving the question is seen as an authority or someone we want to please (or not displease) then we would decide to comply and answer the question.

Then we would somehow have to convert it into a small program such as the pseudo-code:

But I assume we don't really run programs like this in our brains. So what exactly does happen?

When I do the experiment on myself. I hear these animal names popping into my conscious as if from no-where.

It's as if the simple desire to answer the question together with hearing the question (or perhaps saying it to one's self) is enough to trigger the answers to be recalled from long-term memory.

I don't consciously have to convert the question into any kind of "brain programming language". So if my brain is doing this, it's doing it automatically. (And perhaps sometimes wrongly, hence why something not an animal might pop into the brain.)

Do the current theories say that the English sentence itself is the sort of scripting language of the brain or does it translate it into something else (maybe non-linear)?

The task you're referring to is called the Verbal Fluency Test. In "A Biologically Constrained Model of Semantic Memory Search" by Kajic et al. wherein a neural model of this task is described.

The model assumes words were previously encoded with relations between them according to lived experience. Consequently, the words are represented as N-dimensional vectors with relations between vectors constructed into a neural associative memory. As each word is selected from the question, a memory saves the words retrieved and uses those retrieved words to inhibit the memory so it doesn't repeat itself. This control flow is shown in the diagram below: 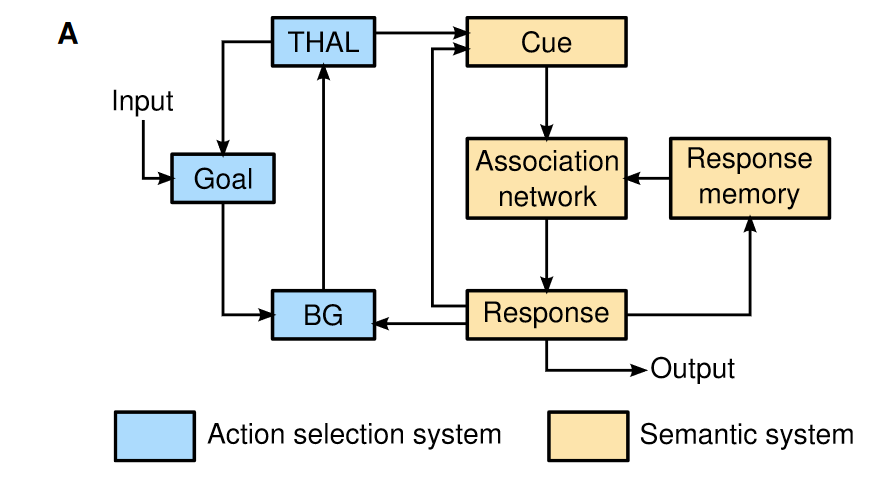 As shown in the paper, this approach matches human data pretty well, but only if you use word-associations taken from Free Association Norms.

Open research questions include where the word encodings came from in the first place and how to make this model match human data better.

Not the answer you're looking for? Browse other questions tagged cognitive-psychology neuroscience reinforcement-learning language-processing or ask your own question.

10
The computer model of the brain

18
Do we understand the non-subjective mechanisms behind pleasure and pain?
7
Can processing effort for sub-tasks in neural networks be measured?
10
Does the brain generate identical words in different languages similarly?
1
Jung's Anima and Neurological Basis in Split-Brain Patients; Left-Persona and Right-Anima
4
Effectiveness of “non-focused” learning
1
Reaction when light is turning on and off