Why do I perform better at rhythm games after a long period of not playing?

Every once in a while I decide to play Phase Shift (very similar to Guitar Hero). I might go weeks or months between plays, but when I return, I often break a high score within the first few songs I play, even on songs I've played tens of times before. After about half an hour of play, my skill seems to drop off and I get average to low scores.

Is there any proposed explanation for this effect? Are there studies that measure it, and if so, what activities were used?

I don't play any musical instruments, so I'm also curious if this happens for real music as well.

Background
Unfortunately my observations haven't been published yet, but an interesting thing I see with listening tests in noise is that people are systematically performing better when they come in a week later for a re-test.

Now I'll add some background information about types of memory as a general answer (Fig. 1).

is defined as the memory system in charge of the encoding, storage, and retrieval of the procedures (rather than episodes) that underlie motor, visuospatial, or cognitive skills

It includes such arbitrary matter of understanding the test (listen and repeat sentences / play a game) and other when subjects perform a certain task for the first time.

Now an important part of long term memory is consolidation (Miller, 2008), which is

Memory consolidation is defined as a time-dependent process by which recent learned experiences are transformed into long-term memory, presumably by structural and chemical changes in the nervous system (e.g., the strengthening of synaptic connections between neurons).

After a while of playing and being past your peak, you may simply get tired, bored, or loose focus for other reasons, which reduces performance. 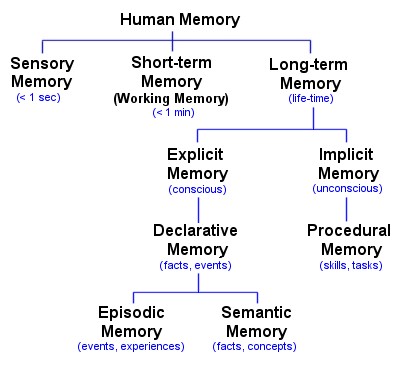 Not the answer you're looking for? Browse other questions tagged neuroscience learning memory performance video-games or ask your own question.

174
How is it that taking a break from a problem sometimes allows you to figure out the answer?