Is the effect related to shutting your eyes when a car is turning well known?

Since I was little I realized that when you close your eyes when being in a car and the car turns in a street to the side, you perceive the car turning more in one direction than it actually does.

Does this effect have a name? Is it an example of some well known effect? If so, what is it and where can I learn more about it?

Short answer
In general, sensory systems are not well equipped to perform absolute estimations of a stimulus level, especially since they adapt to the ambient level of stimulation, i.e., their baseline is re-set continuously. Nonetheless, the vestibular system is quite well capable of estimating the degrees of rotation, as shown in blindfolded subjects that were rotated along the vertical axis.

Movement in the horizontal plane is sensed by the semicircular canals in the inner ear (Fig. 1). One fundamental principle in sensory organs in general is that they operate on a relative scale. In other words, sensory systems excel in comparing two stimulus intensities. They are, however, poorly equipped to provide an absolute measure of stimulus intensity. How bright is bright? Only through experience does one know the absolute value of a stimulus. I'm in the hearing sciences, and I can pretty well tell what the absolute stimulus level is of a stimulus between 20 and 70 dB. But that's only because I spent hours and hours providing well-defined stimuli to study subjects. If you ask me how bright a certain flash of light is, I surely can't tell you.

What's more - sensory systems adapt quickly (Webster, 2012). For example, if you keep on moving in circles then the sensory end organs in the semicircular organs (hair cells and associated vestibular nerve) adapt and become less responsive to the ongoing stimulus (St. george et al., 2011). However, short circular movements in a car are typically short accelerations and decelerations, which are pretty well encoded by the vestibular system. Indeed, blindfolded subjects do pretty well in regaining their original position when rotated about a head-centered vertical axis. It is not until adaptation comes into play that things start to deteriorate. (St. george et al., 2011). 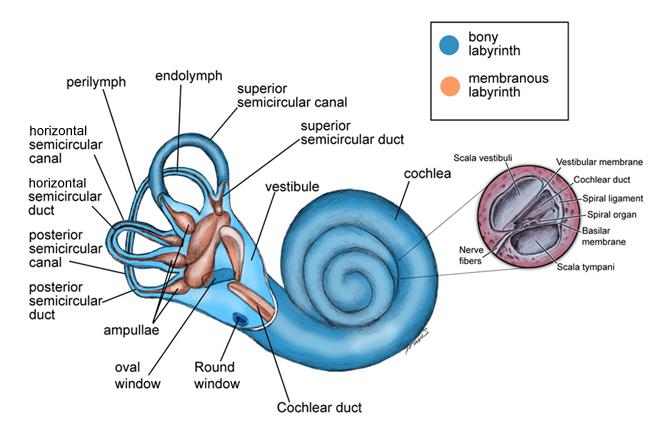 Not the answer you're looking for? Browse other questions tagged neuroscience perception or ask your own question.

12
What is the “static” in human vision called?
7
How is light processed by the human brain when awake and in dreams?
3
Effective sampling rate in human visual system
4
What is the phenomenon that one can recognize a movie after seeing a scene for a fraction of second called?
6
How to test whether a person is Left-Eared or Right-Eared?
3
Perception Cardinality
1
what causes an action potential to propagate exactly and why should it propagate?
0
What is the psychological explanation for the phenomena that a person sees the solution to a problem as “simple” once it has been found?