How does this experiment prove a causal relation between coherence and good feelings?

I'm reading Thinking, Fast and Slow by Daniel Kahneman and I came across the following text:

The Remote Association Test has more to tell us about the link between cognitive ease and positive effect. Briefly consider the two triads of words:

$$\text{sleep mail switch}\\\text{ salt deep foam}$$ You could not know it of course, but measurements of electrical activity in the muscles of your face would probably have shown a slight smile when you read the second trial, which is coherent (sea is the solution). This smiling reaction to coherence appears in subjects who are told nothing about common associates; they are merely shown a vertically arranged triad of words and instructed to press the space bar after they have read it. The impression of cognitive ease that comes with the presentation of a coherent triad appears to be mildly pleasurable in itself. The evidence that we have about good feelings, cognitive ease, and the intuition of coherence is, as scientists say, correlational but not necessarily causal. Cognitive ease and smiling occur together, but do the good feelings actually lead to intuitions of coherence? Yes, they do. The proof comes from a clever experimental approach that has become increasingly popular. Some participants were given a cover story that provided an alternative interpretation for their good feeling: they were told about music played in their earphones that "previous research showed that this music influences the emotional reaction of its individuals". This story completely eliminates the intuition of coherence. The finding shows that the brief emotional response that follows the presentation of a triad of words (pleasant if the triad is coherent, unpleasant otherwise) is actually the basis of judgments of coherence. There is nothing here that system 1 cannot do. Emotional changes are now expected, and because they are unsurprising they are not linked causally to the words.

My Question: Why does the adding of the cover story in this experiment show that good feelings lead to intuitions of coherence (that there is a causal relation)? I find this conclusion rather strange. I'm probably mistaken but it seems to me that Kahneman is saying: the fact that there was no intuition of coherence when these participants were expecting to respond emotionally to music, shows that there is a causal relation between the good feelings and the intuition of coherence. Why would this make sense?

This excerpt refers to an experiment described in Topolinski & Strack (2009) and Topolinski & Strack (2009), and is part of a series of experiments that used a variety of different methods to demonstrate the causal relation between affect and coherence, of which only 1 is described above, so even if it isn't convincing by itself, a lot of additional evidence would need to be questioned to thwart the conclusion.

This particular experiment uses a popular paradigm developed by Schwarz & Clore (1983) (which in turn is based on a previous experiment by Zanna & Cooper (1974); for reviews see Schwarz & Clore (1988), Schwarz & Clore (1996), Schwarz (2012), and Wikipedia), that has been used many times to demonstrate a causal relation between affective experience and intuition or metacognition. The premise behind this experimental paradigm is that once an affective experience is attributed to a particular cause, it is no longer used as information for subsequent judgments. This assumption has been demonstrated in many experiments, but contrast it with Payne et al (2005) and Allen et al (1989) who report that attempts to correct misattribution failed in their studies, suggesting that affective experience information can be reused in some circumstances. Luckily, this latter possibility does not impact the experiment in question.

The authors of this experiment propose a detailed mechanism for how subjects make judgments of coherence: As the word triad is read, the processing fluency (cognitive ease, or the rate that the words are processed) causes an affective response (subtle smiling reaction), that subjects become aware of, and attribute to subsequent intuitive judgments (such as coherence). 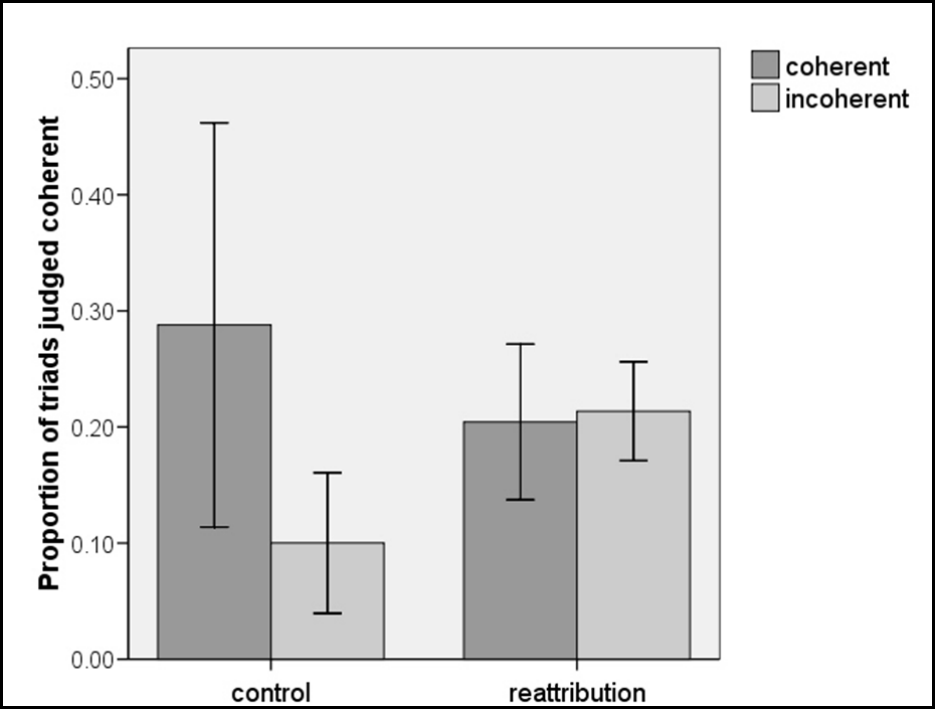 The results of the experiment indeed demonstrated that once subjects reattribute positive affect to background music, they no longer use it for coherence judgments, and this results in a significant reduction of correct responses, leading to the conclusion that affect is an important indicator (cause) of coherence.

I would not be surprised if the testers did do some initial testing and came to the conclusion that knowing what the test was measuring affected the results.

Thus, the music story is just a misdirection layer added to attempt to prevent bias in the measurements because a participant "figured out" what is being measured. If the participant were told to do the exact same thing without some sort of cover story then some, if not many, would figure out what was going on because "figuring out" the purpose of something one is participating in would be a natural tendency. If instead, the testers could get the participant to focus on why is the music important instead of the words then it increases the chance that what is being measured is really the emotional affect of reading the words.

Not the answer you're looking for? Browse other questions tagged cognitive-psychology social-psychology perception emotion experimental-psychology or ask your own question.

4
How to ethically research the effect of expert lies on lay people
2
Terminology for deep-seated feelings?
5
Neurophysiological mappings of empathy
4
What is happening neurochemically when we seek to reduce stress by taking aggressive action?
1
Does similar writing style tell us the writers are similar with respect to some measure/perspective?
2
What is the basis of the belief that modern psychology demonstrates that words themselves can be hurtful and verbal aggression should be wed out?
9
Is the symbolic meaning of dark/black and light/white innate in humans?