Due to Gestalt Psychology, is the face an illusion?

Gestalt Psychology maintains that we perceive a whole from parts, and that we fill in missing gaps. The "whole" we perceive is more than the sum of parts we perceive - it also involves what our minds add in.

Given this, is the concept of a "face" a result of Gestalt psychology on our minds? All that's on the face are eyes, ears, a mouth, and a nose. Yet we combine all these parts (which objectively seem discrete from each other) and come up with the concept of a face (the "whole" in this example).

Is this kind of reasoning correct?

Dependent on your definition of an illusion, there is truth in your claim.

A definition of an illusion is:

[A] perception, as of visual stimuli (optical illusion) that represents what is perceived in a way different from the way it is in reality.

But then - what is reality?

First off, Bach-y-Rita famously proclaimed, 'We don't see with our eyes, we see with our brains' (Abrams & Winters, 2003). The reason he said that is that everything we perceive is generated within our brain; it's a synthesis of visual information (photons) flowing from the photoreceptors in the eye (rods & cones) to the visual cortices. For instance, color and shape are mere reflections of brain activity. Colors do not exist - the brain synthesizes them by combining information from three classes of photoreceptors, each sensitive to another peak wavelength.

Secondly, the rabbit hole goes a lot deeper than the Gestalt Principles. The retinal image is actively completed by the brain (Ramachandran & Ramachandran, 2005). There are two relatively large gaps in each of our retinae, namely the place where the optic nerve head leaves the retina, called the optic disc, or the blind spot. No sensations, and hence no conscious perceptions can be generated by these regions which are devoid of photoreceptors. Yet, we do not notice those gaps in the visual field, because the brain interpolates what it guesses might be there in the visual field and actively fills up the empty spaces in the conscious image.

As a consequence of this, people suffering from retinal degeneration might not even notice it, only when they start hitting street signs and bump stuff from the table. Even then, they often do not perceive the patchy dead regions in their retinae, instead, they know there must be a gap, because they are hitting things. The brain simply fills the gaps such that they are not noticeable in the visual percept. Nonetheless, entire road signs or entire crystal bowls or glasses on the table might be erased, as the brain simply extends the table image in our minds.

Gestalt is a German word without a direct translation into English. (Reeves, 2013) The Oxford English Dictionary states that

Gestalt is a noun in Psychology, meaning “an organized whole that is perceived as more than the sum of its parts”, with a 1920s origin in German, literally meaning “form, shape”. (OED, n.d.)

With “formation and destruction cycle” theories within Gestalt Therapy, if for example there is a gap in memory of events due to dissociation (mental flight in the fright/flight/fight/freeze/fawn response, also described as mental detachment from the event) during a traumatic event, the person affected and their mind will try to fill in the gaps in order to reach the end goals of completion and withdrawal. Problems can lay in the way these gaps are filled as wrong information can lay there.

Gestalt therapy uses techniques to bring the person into the present rather than the past or projected future (Hess, 2007), helping the person to reach completion and withdrawal without the need to force the memories of the past.

The concept of gestalt was first introduced in philosophy and psychology in 1890 by Christian von Ehrenfels (a member of the School of Brentano). The idea of gestalt has its roots in theories by David Hume, Johann Wolfgang von Goethe, Immanuel Kant, David Hartley, and Ernst Mach. Max Wertheimer's unique contribution was to insist that the "gestalt" is perceptually primary, defining the parts it was composed from, rather than being a secondary quality that emerges from those parts, as von Ehrenfels's earlier Gestalt-Qualität had been[citation needed]

Early 20th century theorists, such as Kurt Koffka, Max Wertheimer, and Wolfgang Köhler (students of Carl Stumpf) saw objects as perceived within an environment according to all of their elements taken together as a global construct. This 'gestalt' or 'whole form' approach sought to define principles of perception—seemingly innate mental laws that determined the way objects were perceived. It is based on the here and now, and in the way things are seen. Images can be divided into figure or ground. The question is what is perceived at first glance: the figure in front, or the background.
(Source)

The key principle of Gestalt is that you need to examine the relationship between your inner world and external world; and how that relationship changes. (Reeves, 2013) Are the two worlds in balance? In other words, do you have a healthy contact with your environment?

One concept within the key principle is the “formation and destruction cycle”. The cycle goes from sensation, to awareness, to energy, to action, to full contact, to completion, to withdrawal and then back to sensation. Where the contact is destructive, the aspects of destruction are referred as ‘Contact Boundary Disturbances’.

Formation and destruction cycle – Expanded by me from Reeves (2013) 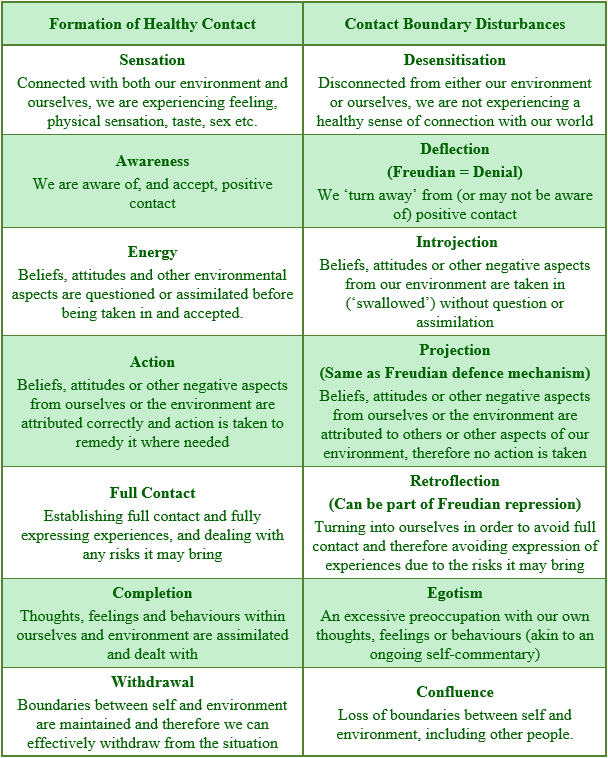 The Gestalt model of therapy integrates humanistic with psychodynamic theories, and this is where the psychodynamics come in. Not only can you compare some of the disturbances to Freudian ego-defence mechanisms, but you are actually analysing what is happening within the client whilst trying to help them to reintegrate their self with the environment.

Reeves, A. (2013). An Introduction to Counselling and Psychotherapy: From Theory to Practice. London: SAGE Publications Ltd.

5
What are the real motives of people helping to each other?
3
Is there a name for arguing with other people in one's mind?
1
About Tracking the psychological defense mechanism

5
Closure, an actual psychology term relating to filling in information?
11
What's the explanation of this optical illusion where many coloured arcs radiate from a central point?
4
Is prior experience necessary to perceive the Kanizsa triangle illusion?
2
Is the Rubin Vase illusion an example of inattentional blindness?
1
Why do we see shadows in the following black-and-white optical illusion?
3
Is the Thatcher Face Illusion only limited to face recognition?
3
Is there a foveal explanation for the duck-rabbit illusion?
5
What causes this motion illusion?