Do men, on average, have a higher general intelligence score?

I'm aware of this study that was linked during an argument: "Sex differences in brain size and general intelligence (g)" and this question Gender differences in IQ among undergraduate psychology students.

So, do men, on average, have a higher general intelligence score? And if yes, why?

There's a Wikipedia page with a lot of related studies. Among other things we find out there that:

A 2004 meta-analysis by Richard Lynn and Paul Irwing published in 2005 found that the mean IQ of men exceeded that of women by up to 5 points on the Raven's Progressive Matrices test.[...] Lynn's findings were debated in a series of articles for Nature.[...]

This new (2017) study you ask about was conducted by a group whose fist author has recently co-authored papers with Lynn. And not surprisingly, the way they construct their g in the 2017 paper is quite similar to Lynn's, i.e. fairly substantially loaded the progressive matrices test. 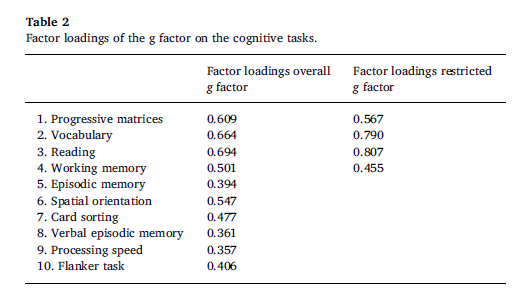 So perhaps their ultimate result is not surprising in this respect, i.e. it seems a replication of older research in a newer sample. On the other hand, the 2017 reports statistically significant differences on practically on all factors (some in the opposite direction) 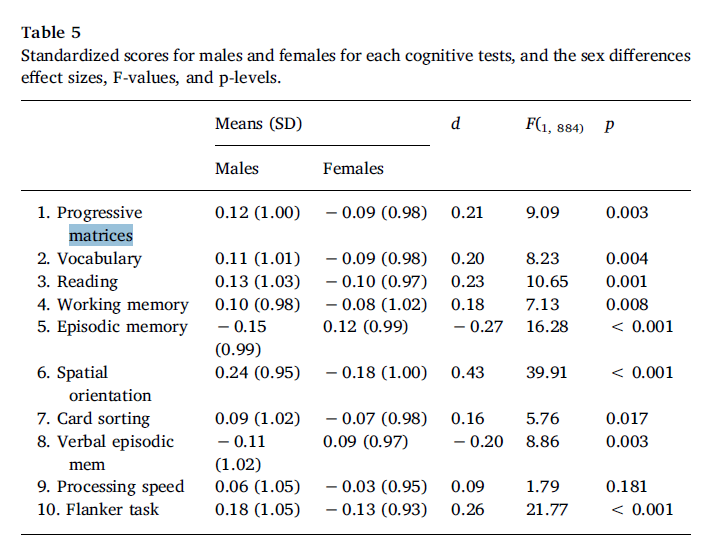 As far as I can tell, this is quite unprecedented... so we'll see what reactions it triggers from other researchers in the field.

In previous work Lynn has been accused of basing his conclusions on convenience (and thus non-representative) samples.

Although the HCP data still have a somewhat restricted age-range (22 to 37 years), the sample is demographically diverse and can be considered a more population-representative sample compared to that of Burgaleta et al. (2012).

They also mention that another recent study published in the same journal, Illiescu et al. 2016 who claim nationally representative samples for Romania found for instance much fewer differences on the progressive matrices test... limited to a small age window which interestingly overlapped substantially with the HCP sample age group: 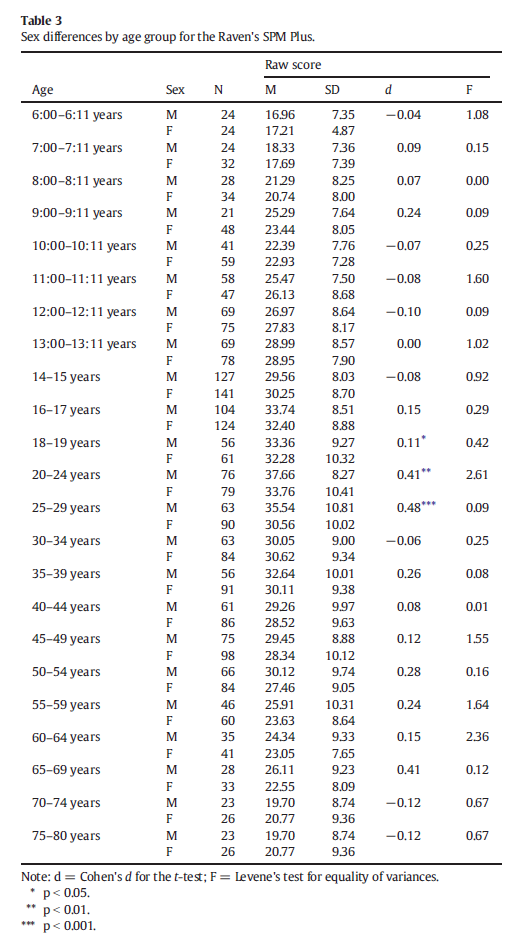 It's not too clear if this is due to not enough power for the other sub-samples or there's a small age effect that appears and then vanishes... or it could be just spurious (these tests are non-corrected for multiple comparisons). Iliescu et al. do say that:

The p-values reported in Tables 1–6 are not corrected for multiple comparisons. When using Bonferroni adjustments none of the comparisons are significant. The interpretations therefore focused on effect sizes. [...]

Given that diversity and volume of the data, and the fact that some of the compared samples (age × sex) are small, we have conducted a meta-analysis for each category of scores, for each of the 6 tests. Table 7 presents these results. The only two scores with a significant (though small) effect are the Raven (d=0.11, p < 0.01), and the Performance subscore of the SON-R (d=0.12, p < 0.01), both in favor of males. In the case of the SON-R, medium heterogeneity is signaled by the data: Q(5)=10.01, p < 0.10, I2=50.04, i.e. 50% of the total variability in this set of effect sizes are due to between-subsamples variability (true heterogeneity). In the case of the Raven scores, heterogeneity is not present: Q(22) = 21.34, ns., I2 = 0.00; i.e. all variability in effect size estimates is due to sampling error within subsamples. 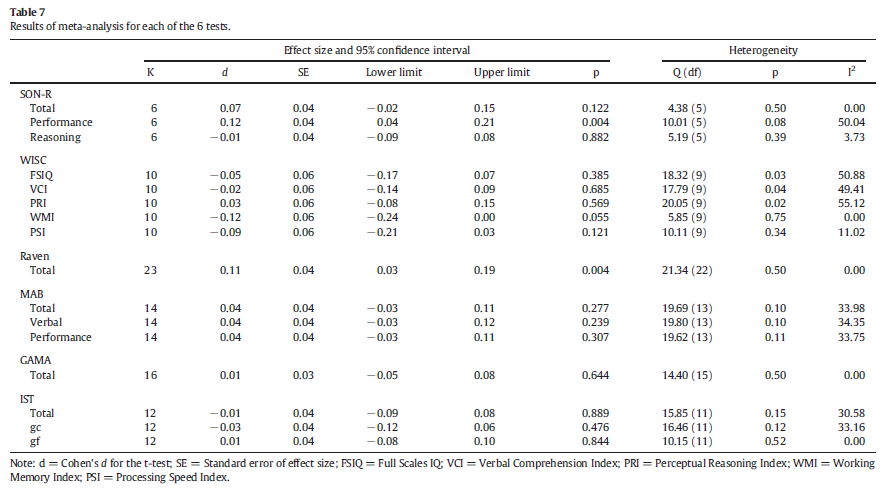 And researchers have tried to pinpoint what type of questions on the progressive matrices test cause the sex differences typilcally reported, with some hypoteses failing replication. A 2008 review-ish paper said

In conclusion, the identification of APM performance dimensions based on information processing continues to be an open question and is likely to remain intractable without experimental manipulations of important variables related to the construction of the items and to the test as a whole.

There's another 2017 study which found that

Time will tell if this can be replicated or not.

But nonetheless using neuroimaging proposed that men and women have different brain activation patterns on such tests:

So I think this question is pretty much in the air still.

Another 2017 study I find interesting did not report sex differences (either way) but did propose that participants (of both sexes) use two different enough brain regions to solve the varying problems on the progressive matrices test, namely that there might be different visuospatial and verbal-analytic intelligences (possibly correlated, of course):

Recent studies revealed spontaneous neural activity to be associated with fluid intelligence (gF) which is commonly assessed by Raven’s Advanced Progressive Matrices, and embeds two types of reasoning: visuospatial and verbal-analytic reasoning. With resting-state fMRI data, using global brain connectivity (GBC) analysis which averages functional connectivity of a voxel in relation to all other voxels in the brain, distinct neural correlates of these two reasoning types were found. For visuospatial reasoning, negative correlations were observed in both the primary visual cortex (PVC) and the precuneus, and positive correlations were observed in the temporal lobe. For verbal-analytic reasoning, negative correlations were observed in the right inferior frontal gyrus (rIFG), dorsal anterior cingulate cortex and temporoparietal junction, and positive correlations were observed in the angular gyrus. Furthermore, an interaction between GBC value and type of reasoning was found in the PVC, rIFG and the temporal lobe. These findings suggest that visuospatial reasoning benefits more from elaborate perception to stimulus features, whereas verbal-analytic reasoning benefits more from feature integration and hypothesis testing. In sum, the present study offers, for different types of reasoning in gF, first empirical evidence of separate neural substrates in the resting brain.

For more on this latter issue see my answer to a related question here.

Not the answer you're looking for? Browse other questions tagged neuroscience intelligence gender or ask your own question.

8
Gender differences in IQ among undergraduate psychology students
8
What is it called to think without language? Are there studies around it?

8
How does raw IQ change over the lifespan at the group-level?
9
How can psychometry measure the very high IQ's in adults?
2
Studies linking brain chemistry to sexual infidelity
2
Are woman more Judging than men in the MBTI?
7
How to interpret a BBC news article on the effect of race on intelligence?
8
Gender differences in IQ among undergraduate psychology students
5
Is touch sensitivity higher for females?
0
Impact of pre-college schooling on IQ (WAIS)?