What regulates the strength of motor signals?

I've seen cognitive and robot models where the input signals from the sensors are directly used as the signal for outgoing motor control.

This doesn't make much sense, because obviously we're able to do heavy work with our muscles quite independently from the strength of incoming signals from our sensor systems. However when I consulted several books on general cognition, I wasn't able to discover the source of these arbitrarily strong signals - I'd suspect the thalamus.

I wonder how you could perform a task, e.g. playing a piano, by applying weak or strong force. Both the plan (how to move the fingers) and the feedback (how it sounds) signal would remain the same.

So where does the signal for motor behavior originate, and more importantly what (or who) regulates its strength? Where does the extra energy come from?

Short answer
Muscles are controlled by motor neurons in the spinal cord. The number of motor neurons that fire, as well as their individual firing rates govern the control of muscle force. 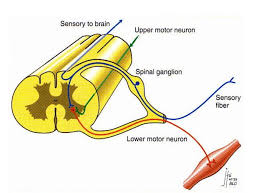