Why are empty spaces around hippocampus and striatum not filled with astrocytes?

I understand that, generally, when a neuron dies, the vacated, empty space will form a scar in the form of an astrocyte. Basically, the astrocyte thus replaces that neuron.

Why then are there empty spaces around the hippocampus and striatum that aren't filled with astrocytes? I am talking about the same spaces where adult neurogenesis might occur.

Why are these spaces left empty? Are they "waiting" for possible adult neurogenesis and therefore don't get filled in with astrocytes?

A better question might be "How does the CNS distinguish between types of empty spaces inside it?"

Short answer
Glial scarring is due to brain damage. Brain damage results in molecular signals to be released that attract glial cells. Spaces in the brain present during development are not characterized by signalling molecules associated with trauma.

Background
The key here is that glial scar formation follows damage to the brain, and is associated with healing processes in the brain, including those occurring after ischemic stroke (Huang et al., 2014) and physical trauma (source: Society for Neuroscience, 2010). Brain damage results in the release of inflammatory proteins that signal glia to form scar tissue (e.g. Patel et al (2013)).

There are many vacant spaces in the brain (Fig. 1), most notably the four ventricles. These spaces are there from birth, and are actually formed within the first few weeks after conception. Because there are no signals involved from brain trauma, and these structures should be there, the glial system does not get signals to invade these areas and fill them up with glial scar tissue.

Also note that glial cells have little to do with neurogeneration; glia is not nervous tissue. 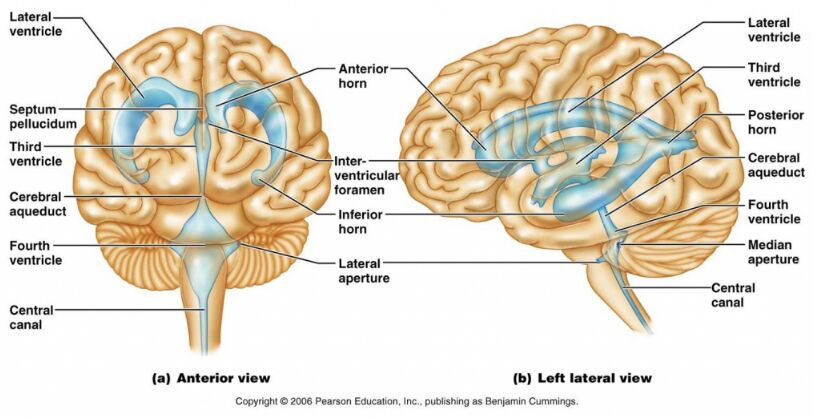 Not the answer you're looking for? Browse other questions tagged neuroscience neurogenesis hippocampus or ask your own question.

5
Why does optogenetics not mean that perfect brain-computer interfaces are possible?
11
Why is sensory substitution not that successful?
5
Why is the order of brainwaves not labelled "alphabetically"?
10
Does adult neurogenesis occur only in the olfactory bulb and the hippocampus?
3
Why the brain region with less activity is not more responsible for some action?
3
Are all dendrites targeted by an axon, or are there a lot of "empty" dendrites?
4
Extra-classical receptive fields are surprising, but retinal ganglion receptive fields are not. Why?
1
Why can’t my eyes gaze around at a constant rate?
2
Why both hypokinetic and hyperkinetic changes are seen in Parkinsons?