I am following a class where we have just learned about so-called neural fields (the prof called them recurrent neural networks and said they are used to model large populations of real neurons). Now we received homework to get to know the method using a simulation, but we got stuck at the last question, about the usefulness of a certain behaviour.

These are our guidelines:

Reset the field; make sure it can memorise one bump. Give two equal inputs < 15 degrees apart. Reduce until the activity level forms one concave signal (so not like in the picture below).

This all works. As soon as the difference goes below 10, the bump changes from the signal below to a concave one, just as the input signal does. However, then we get the question:

In what situation would such behaviour be useful?

And we're sort of stuck there. Is there someone who could point us into the right direction? 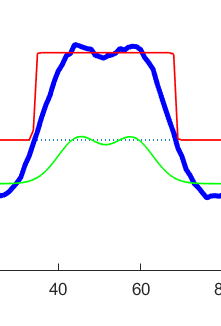 Browse other questions tagged neuroscience model homework or ask your own question.