Is detection of angry faces more efficient in humans?

Hansen and hansen proposed the anger superiority effect: threatening faces pop out of crowds, perhaps as a result of a preattentive, parallel search for signals of direct threat.

Pinkham (2010) demonstrated that we are faster when we have to spot an angry face than the happy one (below). 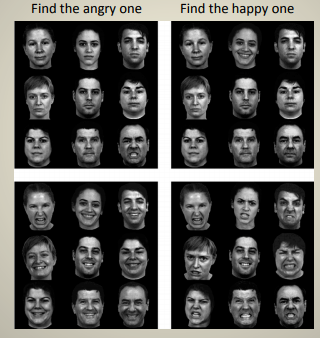 Can we really establish that we have an anger superiority effect?

Angry faces and non-angry faces differ for too many features...

How can we attribute this result (angry faces faster detected) to anger-related features, when so many other features (not necessarily related to anger) are different?

I'm not sure there's totally indisputable evidence on this, but I found a newer (2017) paper by Bayet et al. with infant subjects, but with fear rather than anger as the emotion tested (vs. happy), and (more importantly) using a different methodology (and IMHO better) because instead of different faces (in a crowd), they used the same face but mixed with noise, e.g. for fear [but for illustrative purposes only, see blow why] 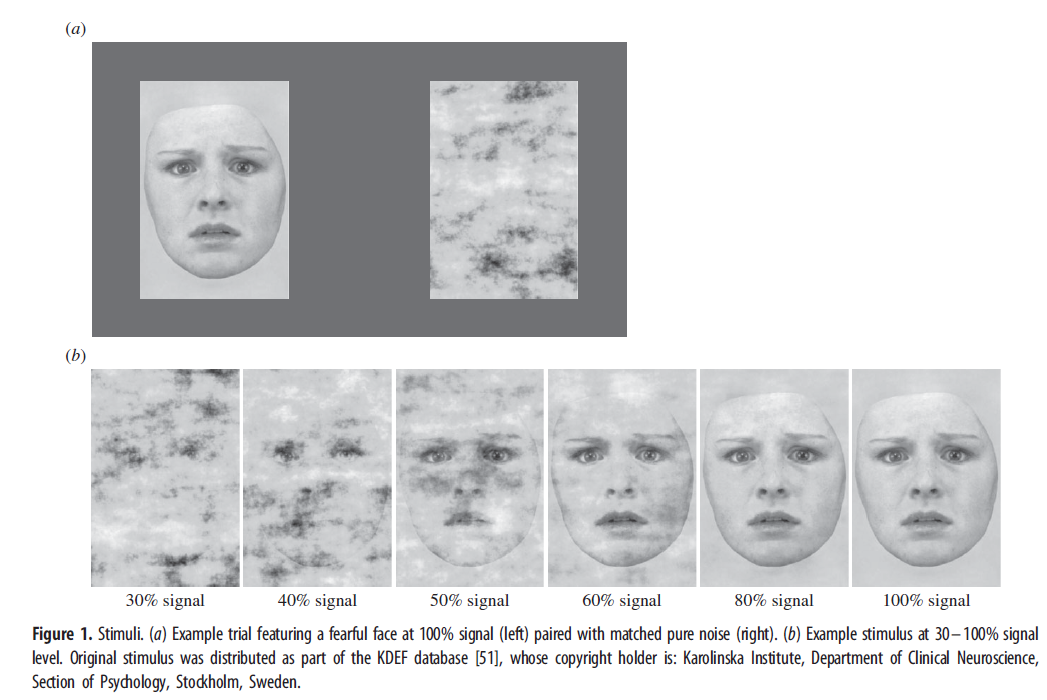 They actually tried to determine which facial features enabled easier detection, eyes or mouth by mixing noise preferentially in that region (the resutling images were validated with SSIM, so there were four series of stimuli prestented (whith varying level of noise in each series).

Each of the face stimuli were presented in differents tests to the infant subjects; each test consisted of a noise-mixed face vs pure noise (two images on screen) and a camera was used to record the infant's reactions. The film was then analyzed to determine several measures of reaction, which were in turn used to calculate measures of face detection.

Two different measures of face detection were ultimately derived: A simple one based on percentages of total looking time [PTLT] and a more complex psychometric measure, the methodology of which is pretty involved (and thus perhaps a weak point of this paper):

A multivariate measure of face detection was derived by classifying trials as ‘face is on the left’ or ‘face is on the right’. The rationale for this metric is similar to the idea of ‘double psychophysics’ [48]: if one can reliably guess on which side of the screen the face was presented by looking at the infant’s behaviour, then it can be inferred that the infant is discriminating between the presence of a face or noise. We implemented this idea computationally using MVPA [42] to locate the side of presentation of the face (left or right) on each trial based on (i) PTLT to the left, (ii) number of looks to the left, (iii) number of looks to the right, (iv) duration of first look to the left, (v) duration of first look to the right, (vi) median duration of looks to the left, (vii) median duration of looks to the right, and (viii) direction of first look (left or right). Durations were log-transformed [56]. Continuous measures were z-scored within-subject. Measures were chosen a priori given the visual preference of infants for faces [57]. PTLT to the right is equal to 100% minus PTLT to the left, and thus did not need to be included. Trials from all participants were pooled to maximize the number of training examples, and a logistic regression algorithm (a common classifier for MVPA) was repeatedly trained on all trials except one and tested on the trial that was left-out (leave-one-out cross-validation). Forward sequential feature selection was implemented inside each crossvalidation loop (see electronic supplementary material, table S2 for results on the full dataset). This procedure led to locating the face side for each trial in a way that reflects generalization. We used logistic regression because it provides log-odds, a direct, criterion-free, continuous measure of evidence for each response (‘face is on the left’ versus ‘face is on the right’)—as opposed to accuracy, a binary measure dependent on a decision criterion. Raw evidence (log-odds for the right versus left side) was pooled to derive correct evidence (log-odds for the correct versus incorrect side) as a multivariate measure of face versus noise discrimination.

The overall results of their analysis look like this (one row for each detection measure): 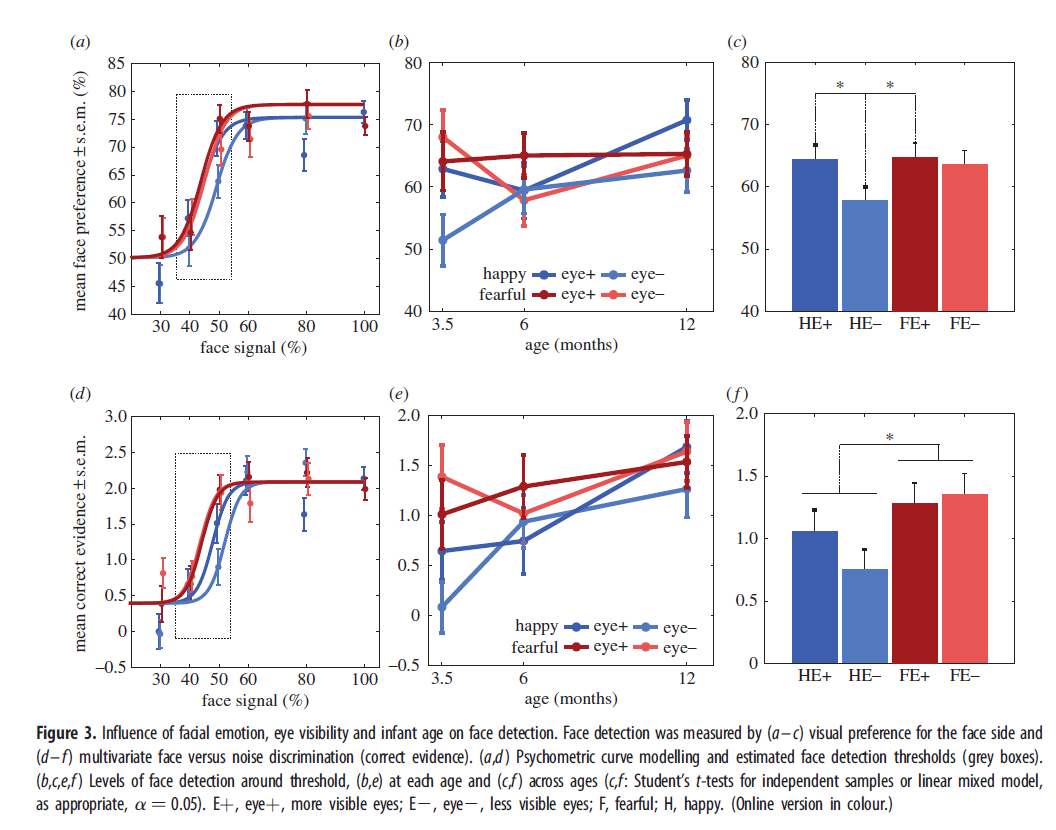 Their interpretation of results:

Similar models were used to estimate the difference in threshold between the Fearful eye- condition and other conditions, or between the Happy eye+ condition and other conditions (electronic supplementary material, tables S5–S8). Results are summarized in figure 4. Overall, psychometric curve modelling of infant looking data revealed face detection thresholds at about 44% signal, with an increase of about 5% signal in threshold for Happy eye- condition compared to the Fearful eye+ condition, and intermediate thresholds for Happy eye+ and Fearful eye- conditions depending on whether PTLT alone (figure 4a) or correct multivariate discrimination evidence (figure 4b) was used as a measure of face versus noise detection.

Results were mixed when considering PTLTs for the face side alone, as the effect of face emotion was restricted to 3.5-month-olds on this measure. However, correct discrimination evidence, a more comprehensive multivariate measure inclusive of PTLTs and other aspects of looking behaviour (e.g. first look) revealed a detection advantage for fearful faces compared to happy faces across all age groups (i.e. it did not significantly interact with age). 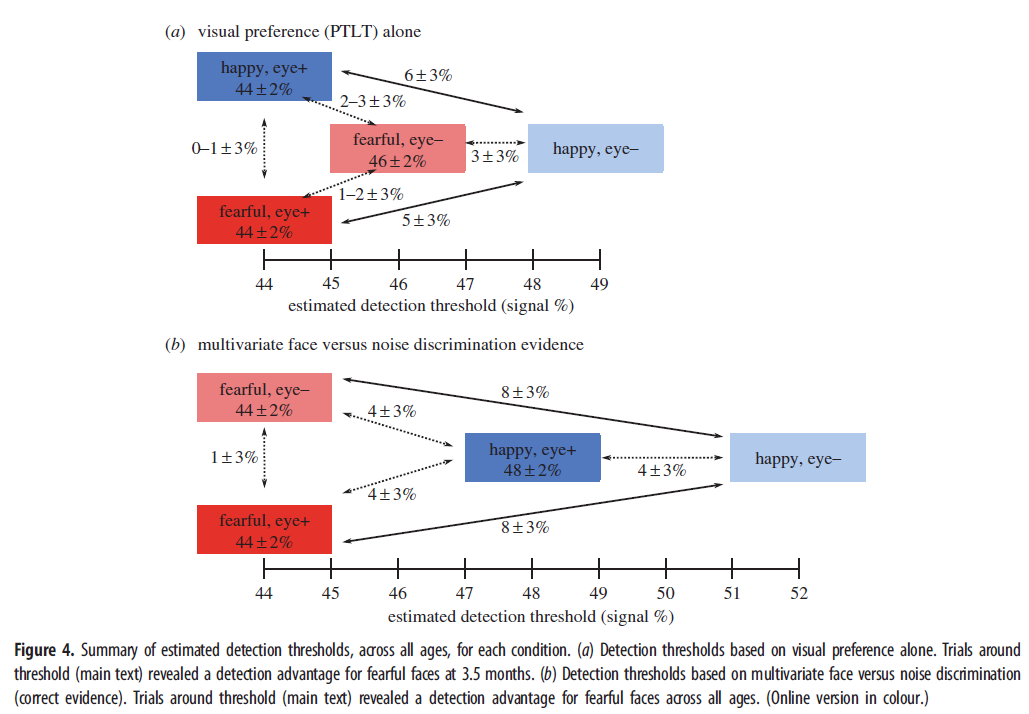 Of course this doesn't answer the question whether the effect holds in a crowd (or any non-laboratory setting, or if applies to anger etc.) The authors themselves say:

Future research should determine whether the readiness to detect fearful faces (compared to happy faces) in infancy generalizes to naturalistic settings beyond the laboratory. Comparing detection of fearful versus angry versus sad faces will also clarify whether the effect applies just to threat-relevant stimuli (anger and fear) or more generally to negative novel expressions (fear, anger, and sadness).

Not the answer you're looking for? Browse other questions tagged social-psychology cognitive-neuroscience emotion or ask your own question.

8
How is brain processing different for situation-less vs. situated emotional faces?
11
Why do humans need emotions?
12
Why do humans cry?
2
Are humans biologically wired to lie?
1
Where can I get data on lie detection and brain activity?
3
Is there evidence to suggest that receiving angry emails increases stress levels?
3
What are examples of stimuli that we know cause a grief or sadness reaction in humans?
4
Is there research to prove that humans achieve more when challenging ourselves or when we challenge others?