Is this brain map scientifically correct?

I'm not an expert in neuroscience but always read about information that seems conflicting to me. On one side I hear that the idea of single brain functions localized in specific brain areas is incorrect since everything is processed globally and on the other side I come up permanently with such kind of depictions of the brain 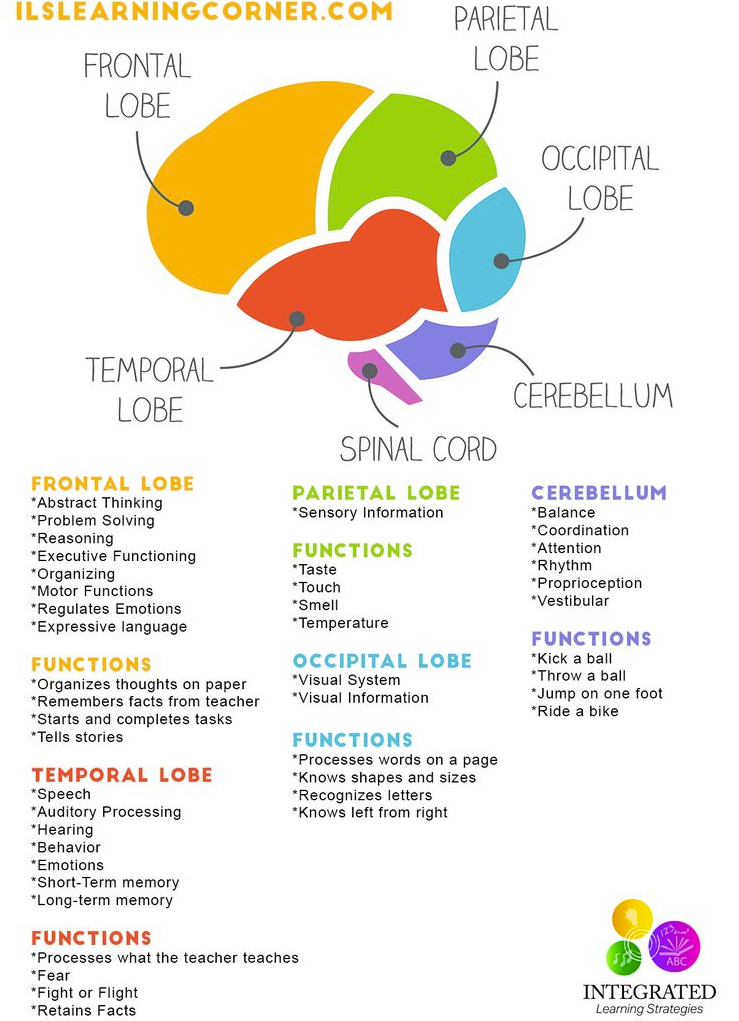 Can someone tell me how far this is correct or incorrect?

The diagram is a somewhat simplistic representation of brain functions, but it is accurate. The diagram given shows the primary areas that complete the actions listed. However, the entire brain is connected and communicates with itself extensively, so it isn't like the occipital lobe is the only brain region active when you see something.

For example, when you see an object, it is first processed in the occipital lobe as this is where the primary visual cortex is located. However, after the actual image itself has been processed, signals are sent to other brain regions for further interpretation. So if you see an angry dog running at you, the signal will begin in your occiptal lobe to process the visual image itself, but signals will then be sent to the temporal lobe to create an emotional response and to the frontal lobe to begin defensive motor activity.

While these two explanations may seem conflicting, they are both somewhat correct. The diagram shows where primary processing of each task takes place, but it takes global communication to accomplish many of the complex tasks carried out by the brain. If there is a disconnect between the occipital lobe and parts of the temporal lobe, you will still be able to see just fine but may not have an emotional reaction to what you see. Vision is technically intact, but the full visual experience is damaged.

Just remember that diagrams like the one shown show you primary processing locations, but signals are sent between many brain regions to accomplish the full range of tasks carried out by the brain.

For further reading on the topic, this website offers a longer but still easy to understand explanation of current findings in brain connectivity: https://www.livescience.com/40855-brain-connections-no-neuron-is-an-island.html

Not the answer you're looking for? Browse other questions tagged neuroscience brain neuropsychology or ask your own question.

5
How does subjective experience arise from matter?
7
How does it come about that specific areas of the brain are associated with specific functions?
2
Pleasure can be implicated in a chemical reaction in the brain, but does this really affect the intensity of the feeling?
5
What is the human brain made of?
0
Satisfaction from music due to correct prediction of a sound
4
Is it scientifically backed that sensory signals always go through limbic/emotional brain system?
1
Brain network datasets
4
How do "ideas" or "concepts" appear in the brain?