Is Fluid Intelligence Dropoff With Age an Established Fact?

The picture below represents the idea that fluid intelligence declines with age. Is this commonly accepted as true and established, even if fitness/learning levels do not decline? 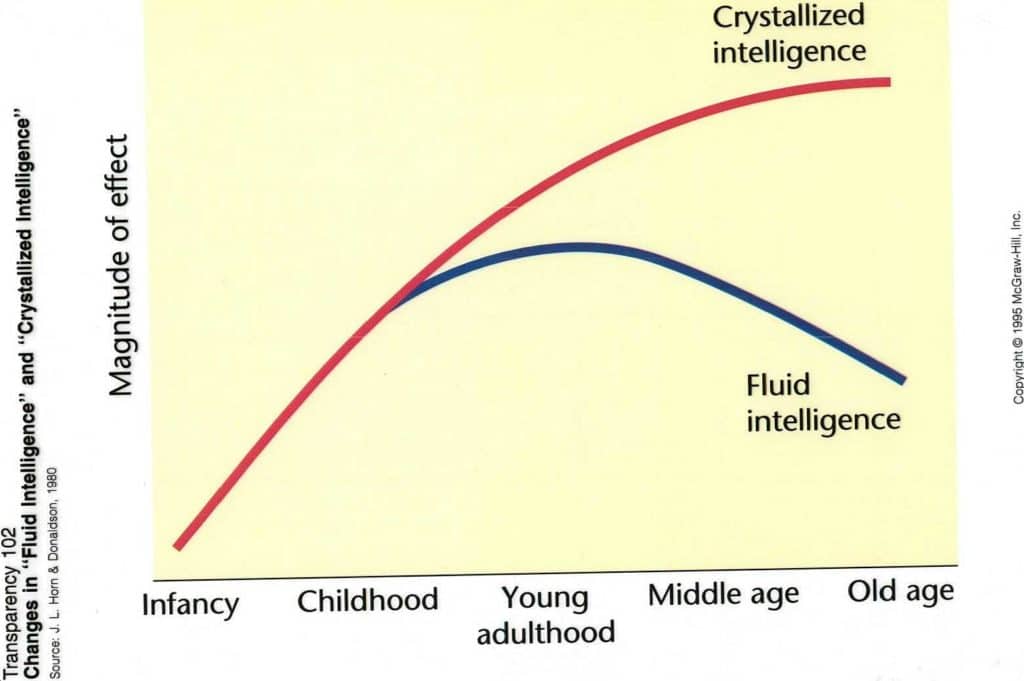 Is the decline in fluid intelligence commonly accepted as true?

These days it seems generally accepted, that the trend is true. However, this hasn´t been the case a few yeas ago, e.g. see the introduction in Elsayed, Ismail, & Young (1980) for a little impression. The reason behind this is the limited comparability between different studies

However, as I mentioned at the beginning: these days - after a huge discussion and a lot of studies - it seems fairly accepted, see Verhaeghen & Salthouse (1997) with a meta-analysis or Baltes (1996) for a review-like paper - Kaufman, Salthouse, Scheiber, & Chen (2016) could also be relevant. The main reason behind this seems to be a decline in processing speed and working memory.

On a large scale this seems to come from a general (biological) decline across the lifespan (see Baltes & Smith, 2004), which brings me to your second question.

... even if fitness/learning levels do not decline?

There are a lot of studies, that show, that physical activity and general fitness seems to have benificial effects on fluid intelligence. This seems to hold for every age (see Elsayed, Ismail, Young (1980) or Linde & Alfermann (2014)(an older sample)). The reasons behind this has not yet been clarified -

I would recommend you to read the introductions and discussions of the cited papers (if possible) for further information. However, (sadly) I don't know any studies explicitly investigating the development of fluid intelligence across the lifespan in regard of exercise/physical fitness (I just know, that exercise/fitness has a beneficial effect on fluid intelligence, but how exactly this has an impact on the decline is - for myself- unknown.)

However, I would say, that there will be a decline in older age, which can be buffered by remaining exercising/a good level fitness, but not really stopped. There should still be a decline - at least at a smaller scale. Or as to say in the words of my professor: "it won´t get better".

Of course all assumptions count for the general/average case, not for a single person.

9
Is the decline of fluid IQ with age less severe for professors and scientists than it is for other people?
8
How does raw IQ change over the lifespan at the group-level?
10
How can psychometry measure the very high IQ's in adults?
6
How is age related change in IQ measured if tests use age specific norms?
13
Is there any evidence that fluid intelligence is malleable?
5
Does Emotional Intelligence (EQ) demonstrate the Flynn Effect?
2
What is the rationale for the normal distribution of intelligence?
3
Isn't fluid intelligence necessarily influenced by crystallized intelligence?