Is there a survey regarding the meaning of distress in the definition of mental disorder?

Although without a doubt discussed in professional circles for a long time before, the definition of mental disorder has been recently brought to the limelight by Trump narcissism debate:

Gartner — who has a PhD and treats patients in a private practice — wholeheartedly disagrees with Frances’s position. “The thing about people with personality disorders … they don’t have distress related to their disorder; they cause distress in other people,” he says. “They’re in complete denial about the nature of their illness or even having an illness.”

I'm not going to ask here what is your take on the controversy because that would be primarily opinion based. What I want to know is whether any surveys have been conducted of psychiatrists or psychologists on this issue, i.e. on where to draw the line with respect to harm/distress. Asking them this will not violate any ethics rules, I think. (I know where the DSM letter stands; for others' convenience here are links to DSM-IV's and DSM-5's version.)

When it comes to any surveys on how mental health is assessed, you can't go far wrong with looking at the DSM-5

In 2010, the APA launched a unique Web site to facilitate public and professional input into DSM-5. All draft diagnostic criteria and proposed changes in organization were posted on www.dsm5.org for a 2-month comment period. Feedback totaled more than 8,000 submissions, which were systematically reviewed by each of the 13 work groups, whose members, where appropriate, integrated questions and comments into discussions of draft revisions and plans for field trial testing. After revisions to the initial draft criteria and proposed chapter organization, a second posting occurred in 2011. Work groups considered feedback from both Web postings and the results of the DSM-5 Field Trials when drafting proposed final criteria, which were posted on the Web site for a third and final time in 2012. These three iterations of external review produced more than 13,000 individually signed comments on the Web site that were received and reviewed by the work groups, plus thousands of organized petition signers for and against some proposed revisions, all of which allowed the task force to actively address concerns of DSM users, as well as patients and advocacy groups, and ensure that clinical utility remained a high priority. (Source: Page 8 of DSM-5)

My copy of DSM-5 has the following definition for Mental Disorder: 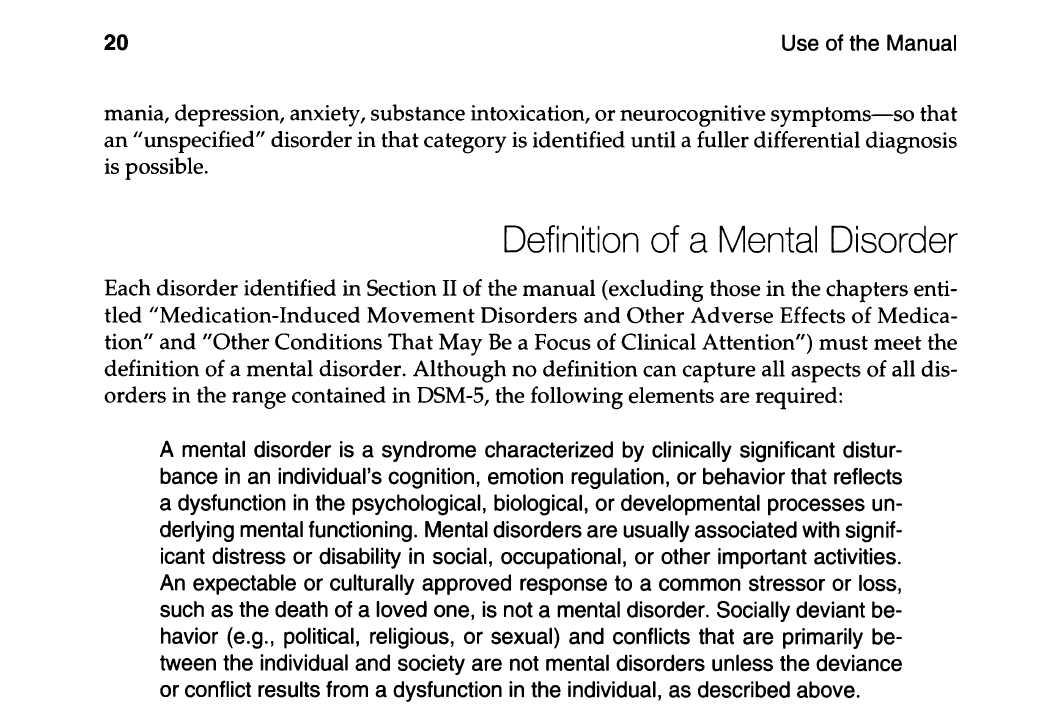 Notice that it said:

Mental disorders are usually associated with significant distress or disability

So therefore, Allen Frances was only slightly incorrect with what he said as there can be social or occupational disabilities without distress, but then based on the findings of Miller at al (2007), John Gartner was also wrong. An example is that Narcisistic Personality Disorder has "weak but significant" relation with intrapersonal distress (Miller, et al. 2007). However, in defense of John Gartner is the fact that;

the strongest impairment associated with NPD is the distress or “pain and suffering” experienced not by the narcissist but by his or her significant others.

Not the answer you're looking for? Browse other questions tagged abnormal-psychology terminology definition or ask your own question.

6
What psychological disorders have frequent and rapid anger outbursts?
4
Is there a case of multiple personalities that is not a disorder?