Is V1 involved in visual imagery?

It's well known that mental imagery shares the neural substrates of its respective modality, despite dissociable multivariate patterns. For example, visual imagery can be decoded across the ventral visual stream, but can be separated from vision-proper based on spatiotemporal dynamics.

However, there seems to be some controversy about the whether the "earliest" sensory regions (e.g., V1) are involved in mental imagery. To my knowledge, many studies seem to show either nonsignificant, weak, or marginal involvement of V1 in visual imagery, but some theoretical articles seem to suggest the opposite.

Can anyone shed some light on the current thinking/evidence?

Background
Visual imagery is a complex and broad topic of research. It's in fact a big pain in visual prosthetic research. In this area of research it's often nice to show those fancy pics of deafferented visual areas in the brain to light up after having been deprived of visual activation for years. Then you find those seemingly strikingly activated visual regions by your awesome visual prosthetic, to be shot to pieces later by critical referees that believe it may just as well be that your subjects have been imagining stuff.

Anyway, visual imagery depends on much of the same structures in the visual system as seeing by itself. The retina, being considered part of the central nervous system, and the end organ of the visual system is not involved as it only delivers input by sensing light. Hence the optic nerve is not involved either. After that we have the brain stem and strikingly, already the LGN in the brain stem has been shown to be activated by imagery. And not surprisingly then, V1, being the output location of the LGN, is activated too (Chen et al., 1998).

However, activation of these regions does not mean they are necessary for imagery to occur. Because imagery follows the visual neural path pretty much in reverse, it is the higher association areas in the brain that are most crucial for this process to occur. Indeed, visual imagery has been shown to occur in people with large trauma-related defects in V1 nearly obliterating the occipital cortex (Bridge et al. (2012).

Meta analyses of various studies has delivered a potential reconciliation of these opposing findings. V1 recruitment may depend on the specific type of imagery, and specifically that detailed imagery is more dependent on V1 (Ganis, 2012). 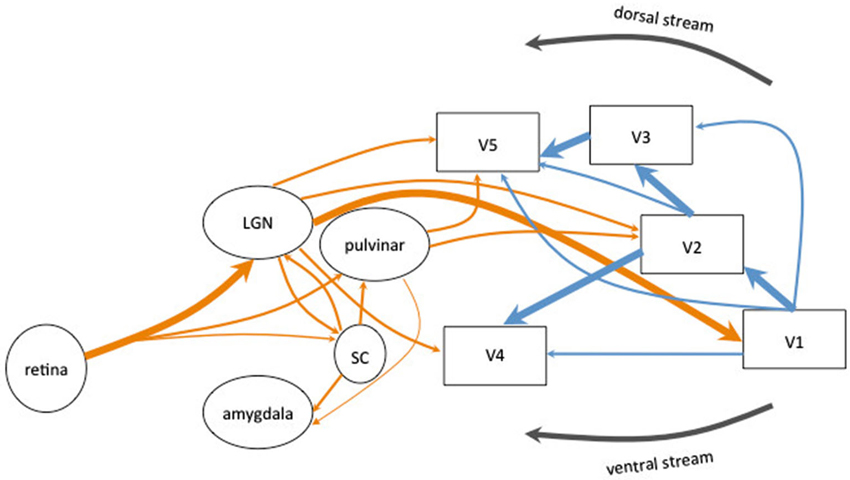 Not the answer you're looking for? Browse other questions tagged neuroscience perception vision sensation imagery or ask your own question.

2
How do we imagine? How do images have qualia?

27
Why does the human visual system produce a bright patch after staring at a bright light source and looking away?
11
Under what conditions does 60hz video produce visual artifacts?
10
Is there an effect of visual expertise on eye movements when examining an image?
7
How fast is the visual system?
3
Effective sampling rate in human visual system
6
If I think of a checkerboard, is there a similar structure to see in my visual cortex?
4
Visual Cortex percentage