Does MEG measure the sum of neural activity or the maximum?

According to Wikipedia, neurons give a response that generates a readable MEG signal when they are firing in a relatively synchronized manner and their current carrying dendrites/axons are all aligned. This occurs most often in pyramidal neurons, due to their perpendicular alignment with the scalp. Consequently, this seems to imply MEG can be imagined as the sum of all pyramidal neuron activity.

However, consider the case where a group of pyramidal neurons are projecting in different directions. The magnetic fields would then cancel each-other out. Would MEG then be considered to take the maximum of the neural responses? I've added top-view illustrations below to help describe the different cases.

"Sum" case where neuron are all projecting in same direction during task: 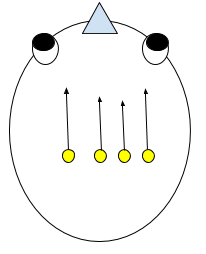 "Max" case where neurons are projecting in many different directions during task: 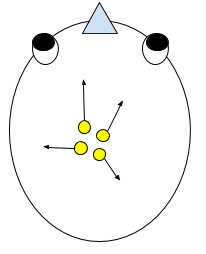 Are there studies that support either case/interpretation?

Browse other questions tagged neuroimaging meg or ask your own question.

18
Does the fusiform face area in patients with Prosopagnosia (face blindness) show lower activity under an fMRI?
6
What does fMRI measure exactly
9
How does glial cell activity influence fMRI, EEG signals?
3
Voltage sensitive dyes technique: What is the underlying measure?
3
Why the brain region with less activity is not more responsible for some action?
3
What does "they tend within and between classes" mean in 'The Irreducible Mind'?
1
Which characteristics of neural activity patterns underlie conscious experience?