Is there a term for individuals who can "visualize" numbers and advanced mathematics?

I recently saw an episode of 60 Minutes about Jacob Barnett, a 13 year old boy who is currently attending advanced physics classes at a local university and was portrayed by the show as being a child prodigy/genius. In the interview, he demonstrates how he's able to perform mathematical transformations in his head by visualizing the numbers as colored shapes. As he explains in the linked clip: 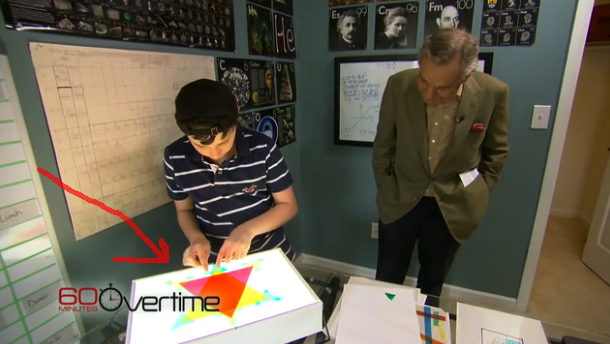 He visualizes multiplying 2 by 27 as a series of colored triangles.

Is this a known phenomenon, and if so, does it have a name? Do other individuals visualize mathematics like this? Or is this just a 12-year old kid... embellishing (to be polite) his thought process?

A number form is a mental map of numbers, which automatically and involuntarily appears whenever someone who experiences number-forms thinks of numbers. Number forms were first documented and named by Francis Galton in "The Visions of Sane Persons". Later research has identified them as a type of synesthesia. In particular, it has been suggested that number-forms are a result of "cross-activation" between regions of the parietal lobe that are involved in numerical cognition and spatial cognition

It doesn't seem exactly like what he does but it could be a form of it. It's hard to imagine just how it would be to perceive the world as a synesthesic person does.

It sounds like he's learned to apply his visual-spatial skills to "arrange" the number forms to aid his calculations.

Synesthesia is covered in detail in the book Synesthesia: a union of the senses, though I'm not aware of any specific case studies on individuals with this exact set of skills.

21
How are autistic savants able to perform certain mathematical computations so quickly?
8
Does associating a color with numbers improve math learning?