Can I read what the person thinking through electrodes or something similar?

First of all I'm not a medical student so I may miss some points here. 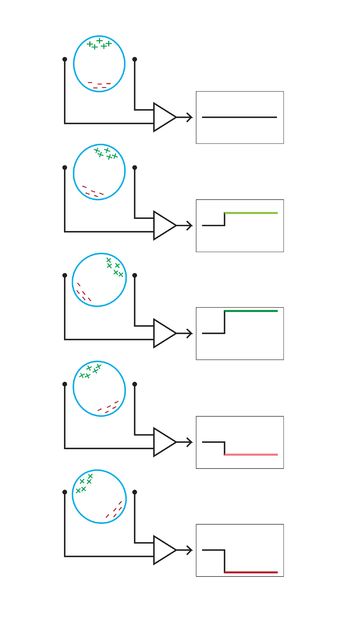 So I used that(I wrote a program) to read these signals and control some thing by moving my eyes, and follow the signals change according to my eyes movement.

Now my program can read this simple electrecity signals and convert it in order to control something else.

But this doesn't make much sense, I need to make it more understandable, for example I'm wondering if there someway to read alphabets the person thought about and receive a unique signal for it, and I mean by (someway) not just through eyes maybe with brain waves or something else I don't know about it.

I take it you want to use eye movements for data input (rather than reading people's thoughts, which would be silly to consider). It's not the greatest idea, efficiency wise, but may have its strengths in terms of convenience. From a fairly recent (2014) review of eye based HCI:

It should be noted, though, that gaze control of WIMP is noticeably slower and more error prone than control by conventional mouse and keyboard (e.g. gaze typing reaches about 20 wpm which is far from the 80 wpm by a touch typist, see Majaranta et al. 2009a).

And the 2009 paper they refer to for state of the art is "Fast Gaze Typing with an Adjustable Dwell Time". It's basically displaying a large virtual keyboard (like your phone/tablet does) and uses a specialized algorithm to reduce errors. I'm not familiar with the details of the latter, you'll want to read the paper for that.

Microsoft Research has a more recent (2017) paper using a cascading virtual keyboard and it claims improvements for the average user. The latter paper also makes me wonder if the previous research overstated its results, because

I don't know what discrepancies are due to; methodology or what is being reported, I guess.

By the way, there's a HCI stack exchange where I'm sure there are more knowledgeable people on this.

As for the title of your question "Can I read what the person thinking through electrodes or something similar?". This is a somewhat different topic, and perhaps too broad to address here. Most of the results in this latter area are much more experimental in nature, i.e. farther from a practical technology right now. Wikipedia's article on thought identification is probably a resonable start.

Not the answer you're looking for? Browse other questions tagged electrophysiology brain brain-computer-interface brain-waves or ask your own question.

0
What Field of Behaviorial Psychology Deals with Technology? How the Application of Pyschology can Improve Something Like Computers