Does wealth cause (or correlates with) narcissism?

In the mental health field, narcissism is viewed as personality trait/disorder, which suggests little changes during the life of the subject.

Nevertheless, one mass media article (based on a book) is titled The age of entitlement: how wealth breeds narcissism, and claims that rich people are more inclined than the poor to engage in quite a number of anti-social behaviors from violating traffic rules to plain stealing. (At least as far traffic violations are concerned, the rich can usually afford the fines more easily, and even if they have their license suspended, can better afford to pay someone else to drive them.) Another indicator was that the rich tended to draw themselves as bigger circles in relation to the world. (But if you think of yourself mainly in terms of net worth, then perhaps that's not surprising or unjustified.)

Most of this was was based on the research of Paul Piff by the way. And at least one of his studies really does suggest causality, it's not a matter of him being misinterpreted by the press: 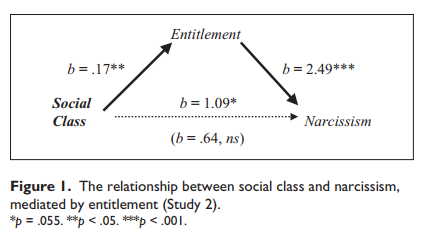 Is there a categorical confusion here in lumping these behaviors with narcissism? Or is it really the case that the richer do these because they are more narcissistic? Or perhaps the rich narcissists are more overt and the poorer narcissists more covert? Are there experimental studies that try to separate these concerns?

I found a review in a relatively obscure journal, but it seems a reasonable summary of the existing research, except for the fact that income and wealth aren't necessarily the same:

A review of literature regarding income and altruism revealed mixed evidence. Chen, Zhu, and Chen (2013) showed that, under a dictator game setting, pre-school children from higherincome families give fewer stickers (endowment of the game) to others compared to kids from lower-income families. Miller, Kahle, and Hastings (2015) altered the game so that the tokens (endowment of the game) had to be earned via work and the kids were told that the recipients of their donation would be other sick kids who were not able to make it to the venue on that day. They still found that kids from richer families are less likely to donate their tokens compared to kids from poorer families. Piff, Kraus, Côté, Cheng, and Keltner (2010) conducted experiments on adults using economic games and scenarios and found that individuals of lower socioeconomic status appeared to be more generous, more trusting, and more compassionate.

On the other hand, Hoffman (2011) investigated historical data during the World War II on people’s decision to rescue the Jews. He found that the higher the income of the people, the more likely they were to rescue the Jews. Holland, Silva, and Mace (2012) used a lost-letter experiment. They dropped letters on pavements in different neighborhoods in the United Kingdom and found that letters dropped in the richer neighborhoods were more likely to be returned to the address listed on the letters. Looking into this issue more thoroughly, Andreoni, Nikiforakis, and Stoop (2017) designed a more complicated version of the lostletter experiment. Under their setting, the envelopes used were thin enough so that contents of items in the envelopes (cash, or bank transfer cards) could be seen from the outside. The letters were mis-delivered to rich and poor households in the Netherlands. Their initial results revealed that the rich were more likely to return the envelopes compared to the poor. However, with further investigations, the authors found that the rich were not more altruistic than the poor. The fact that the rich were more likely to return the envelopes was because they faced lower financial constraint and had lower marginal utility for the found money.

The above evidence showed that the relationship between income and altruism may be ambiguous. Thus, it cannot yet be concluded whether the degree of altruism [...] should be higher for the rich or for the poor.

Unfortunately, that may not be as relevant as I had hoped because

It is unfortunate that a false dialectic between narcissism and altruism is in common usage. The two entities regularly co-exist. Vaillant, in his longitudinal study of healthy males, found that altruism increases significantly in the second half of life – not simply because we become more selfless as we age, but rather because helping others becomes more rewarding to us. A neuroimaging study demonstrated that those who are altruistic directly benefit from their altruism. Participants had to choose to endorse or oppose societal causes by anonymous decisions to donate or refrain from donating to real charitable organizations. The mesolimbic reward system was engaged when one donated money in the same way as it was when one received monetary awards. In other words, altruism activates brain centers that are associated with selfish pleasures like sex or eating.

Unfortunately the narcissism-wealth link alone has received less attention, perhaps because most researchers were interested in outward behavior (like altruism). Or in more prosaic terms, most people don't care how long you look at yourself in the mirror as long as you give them money :P

Not the answer you're looking for? Browse other questions tagged social-psychology personality or ask your own question.

2
Does neuroticism cause people to hurt others?
2
How strong is the correlation between selfies and narcissism?
1
Why do people hide wealth?
4
What are the personality and behavioural correlates of divorce?
5
Does sadism correlate with narcissism?