Does sadism correlate with narcissism?

I mean in the general population. I'm aware of proposals/constructs like malignant narcissism but the empirical evidence (in the Wikipedia page at least) is mostly case-based (serial killers and so forth), i.e. anecdotal.

At least among a sample of high-school students the dark tetrad correlations look like: 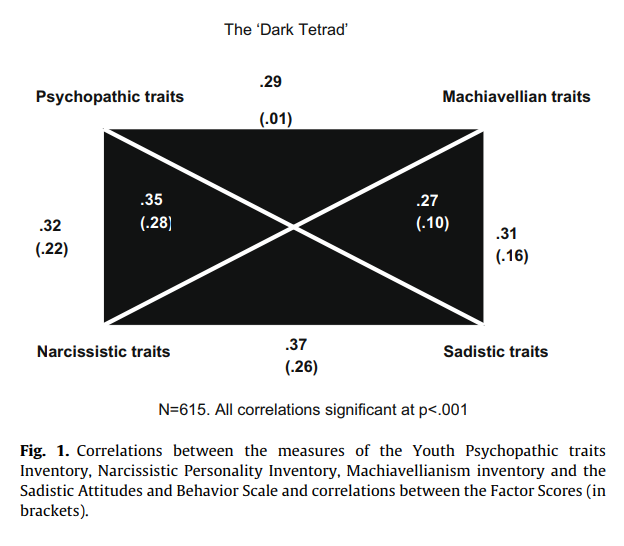 So there's only a moderate correlation between narcissism and sadism (0.37), but it turned out to be strongest of the six (as commonly measured). However it was only the 2nd strongest after an oblique rotation, the psyhopathic-sadistic one "winning" by small margin (0.02) in that approach:

To evaluate if the different measures of these four traits loaded on a more general second-order factor, we conducted a hierarchical analysis of oblique factors which showed there was not a general deviant personality factor that was likely to reflect all types of traits. There appeared to be four primary unique factors corresponding to psychopathic, narcissistic, Machiavellian and sadistic traits. The four constructs thus obtained, appeared to display a greater degree of independence than the original four, with Pearson’s r ranging from .01 to .26 (Fig. 1).

So despite their moderate correlation (all four) dark tetrad bits are seen as reasonably independent factors.

What I find strange in that figure is that after the oblique rotation there was practically no correlation between Machiavellianism and psychopathy. I'm not sure what to make of that.

A discipline named System-Vector Psychology has an interesting claim on the subject, but few words of caution first.

"System-Vector Psychology" is obviously unscientific (nowhere throughout their web site is any scientific research cited or even mentioned). Deeper look into the web site strongly prompts that is charlatanism. BUT it does seem to stem from more or less established paradigms such as psychoanalysis and Leopold Szondi's works in particular, as well as evolutionary psychology.

Not the answer you're looking for? Browse other questions tagged measurement personality correlation or ask your own question.

2
What are the correlations between the facets of honesty-humility in HEXACO personality and the Dark Triad?