Next, agreeableness article has following words:

The lower-level traits, or facets, grouped under agreeableness are: trust, straightforwardness, altruism, compliance, modesty, and tender-mindedness.

And article on Machiavellianism in some way is contradictory:

In simple words that means that high machs are closer to optimal strategy in trust games than low machs. If they are mistrustful, why are they better in trust games?

That's not the only contradiction. Let's look at conscientiousness article:

People who score low on conscientiousness tend to be laid back, less goal-oriented, and less driven by success

High Machs admitted to focusing on unmitigated achievement and winning at any cost.

But enough Wikipedia, there is more ambiguousity in this research article (that references a bunch of other articles):

There are at least two main paradigms of partner selection and both can be evidenced with previous research to be relevant to the partner selection of Machiavellians. On the one hand, similarity in level of affiliation, intimacy needs and personality traits has particular importance in ideal standards and mate choice. Previous studies provided countless evidence supporting the similarity hypothesis

Accordingly, it is also possible that a dominant high-Mach who demands attention can form the most stable – though dysfunctional and asymmetric – relationship with a submissive and permissive low-Mach partner who he or she can manipulate and exploit

P.S. I expect that those "machiavellianists" who are good in trust games usually tend to choose similar [to themselves] partners for relationships and possibly, they are more goal-oriented (and should they really be a part of dark triad?). Also I won't be surprised if these two types of "machiavellianists" will differ greatly in emotional intelligence and mind theory.

"If they are mistrustful, why are they better in trust games?"

From the abstract of the actual paper:

We argue that Christie and Geis’s Machiavellianism scale (Mach-IV) is an instrument that allows the identification of types who vary in cooperativeness. We use that test to predict the behavior of participants in a two-person one-shot constituent game in which subjects face a choice between trust and distrust, and between reciprocation (trustworthiness) and defection. We find that the Mach-IV scale does not predict trusting behavior. It does, however, predict reciprocity. Over one half of those who score low to average on the scale reciprocate trust. High scorers overwhelmingly defect when it is to their advantage to do so.

In other words, high Mach's know when it's to their advantage to stab you in the back and do it. Big surprise there.

The game played, annotated with the results, is reproduced below. 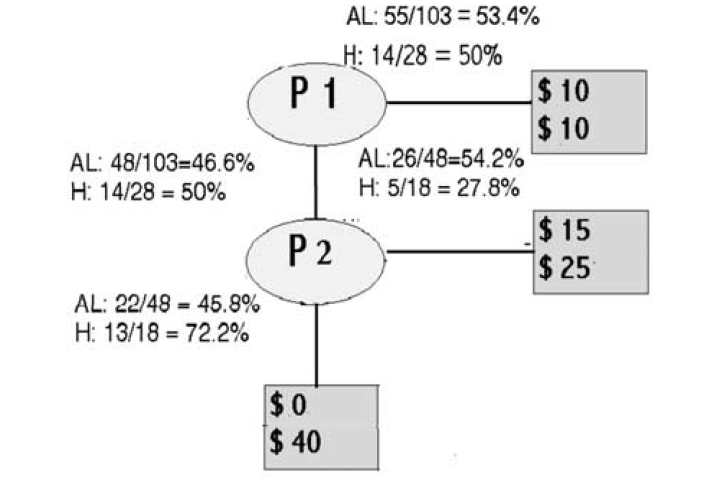 I'll not give a full explanation (read the paper if you are unfamiliar with game theory, it explains it "for dummies"), but suffice to say that the high Mach (H) overwhelmingly moved down as P2, i.e. maximized their own profit even if that meant screwing over the P1 player who was nice to them, whereas average-to-low (AL) Mach players reciprocated (about half the time) as P2 even though that's not the dominant strategy as P2. In other words, AL felt like reciprocating for a past favor, even though that buys them nothing in this game. High Machs (mostly) did not repay a favor in such circumstances.

Not the answer you're looking for? Browse other questions tagged abnormal-psychology personality or ask your own question.